Getting whatever his alias requires.

Fulfill his clients' requests and protect his clients from being charged.

Killing any of his clients who betray his trust.

Shelly de Killer is a major antagonist in the Ace Attorney video game franchise, serving as the secondary antagonist of Farewell, My Turnabout, the fourth and final case in Phoenix Wright: Ace Attorney - Justice For All, and a major character and antagonist in Gyakuten Kenji 2/Ace Attorney Investigations: Miles Edgeworth - Prosecutor's Path.

He is the third heir to a line of assassins known as "de Killer", who are known for their honor and leaving behind a calling card at the scenes of their assassinations. He was initially hired by actor Matt Engarde to assassinate his rival Juan Corrida, and would later return to assist prosecutor Miles Edgeworth in solving one of his investigations.

Ace Attorney: Justice for All

de Killer received a request to assassinate actor Juan Corrida who played the Jammin' Ninja, an action hero and to steal a wooden bear figurine containing a suicide note and bring it to his client. However, Mr. Engarde was arrested based on evidence that was planted by his manager, so de Killer had to resort to desperate measures in order to procure his client's acquittal; Namely, kidnapping the famous lawyer Phoenix Wright's friend and aide Maya Fey, and then forcing Phoenix to defend Engarde in court, threatening to kill her if he would refuse or fail.

The court case drags on, and despite the culprit having been identified as de Killer, Engarde is under suspicion of having hired this assassin. To clear his client's name, de Killer resolves to testifying in court about his client through a two-way radio transceiver; Naturally, he lied and tried to pin the blame on Engarde's manager, Adrian Andrews. Knowing that de Killer would kill Maya if he got in his way, Phoenix decided to show de Killer that his client, which he oh-so trusted, was actually planning to blackmail him with a video recording of the murder. This infuriated de Killer (who values trust more than anything else), who subsequently broke his contract with Engarde and let Maya free. Engarde, in the knowledge that he is now de Killer's next target, desperately confesses his guilt, choosing rather to face punishment for his crimes than to live the rest of his life with de Killer chasing him.

The transceiver de Killer uses to communicate with the court breaks apart violently; The case falls off and the various parts come loose. When he regains his composure, the transceiver is sweating oil.

Shelly de Killer appears in the very first case, where he is the initial suspect for the assassination attempt on the president of Zheng Fa, Teikun Ō (Di-Jun Huang), initially posing as an ice cream vendor called John Doe. Once Horace Knightley, one of the president's bodyguards attempts to dismiss everyone from the investigation after he reveals his partner Ethan Rooke died, de Killer immediately drops his façade and takes Knightley hostage, asking him to let Edgeworth continue his investigation. He reveals he considered Rooke a worthy rival, for he was the first person to ever injure him, when he attempted to assassinate the president himself, unlike Knightley who ended strangled by him. Once he figures all the truth, de Killer makes his escape, but not before leaving a cryptic hint for Edgeworth to decipher.

After the entire case is solved, Edgeworth and Kay find a familiar radio transceiver in the secret 51th floor of the Grand Tower, which starts ringing. Once Kay picks it up, de Killer calls Edgeworth's name and talks with him, giving him a hint that there was a mastermind behind all events, which Edgeworth confirms he suspected as well.

After Edgeworth retrieves evidence from a safe in the 51th floor, he meets with de Killer in the building's rooftop. de Killer tells he is after the mastermind as well, because he never broke his trust by not revealing to him the true nature of the president (who was actually a body double that took his place after the real one was murdered 12 years before the game takes place).

After Edgeworth reveals Simon Keyes is the mastermind and the murderer of the fake president, de Killer appears before everyone and attempts to kill Simon, but he is stopped by Ryōken Hōinbō (Sirhan Dogen), who begs de Killer to spare Simon's life. Though de Killer finds amusing that an assassin like Dogen would go to such lengths to protect someone, he agrees to spare Simon and once again escapes.

Shelly de Killer is an assassin of honor: the one thing he believes in the most is the trust between his client and himself. Should a traitor arise, that person would be de Killer's next target. He is usually very calm and collected, and does not hesitate to throw death threats to all who stand in his way.

Despite being a ruthless assassin, De Killer was very polite and friendly to both his friends and enemies. He was studious, patient, and affable, unnerving many of those listening to him over the radio. De Killer believed that the assassinations he committed were to uphold his family legacy and did not have any personal or emotional motivations behind them, doing them out of honor rather than malice.

The only thing that upset him was treachery, as Matt Engarde found out after trying to blackmail him. 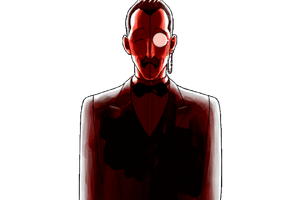 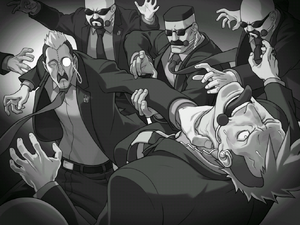 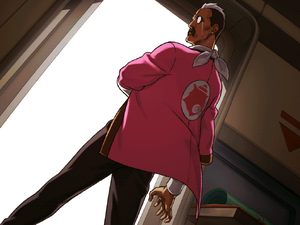