Lord of the Rings

Subdue and kill Sam.
Consume even more prey (all failed).

Shelob guards the second entrance to Mordor - the pass of Cirith Ungol. Gollum takes the hobbits Frodo and Sam this route as an alternative way into the Black Land (the only other known way to enter Mordor being the Black Gate) and they encounter Shelob. Gollum had met the giant spider before and convinced her not to eat him and leads the hobbits to her, so that she will eat them so he can recover his "precious" (the Ring). Shelob poisons Frodo, and Sam thinks that his master is dead, but this is not the case: Shelob's venom basically knocks you out and makes you go completely limp, and seem dead. However, like her smaller cousins, Shelob likes her prey fresh and if anyone lives long enough to wake up from the poison, anyone will probably have no worse than a headache.

Shelob is an ugly beast, bloated from years of hiding in her caves and eating whatever comes her way. She is the spawn of Ungoliant (an ancient fallen angel in spider form whom Morgoth had employed long ago to help him destroy the two Trees in Valinor). She is spider-like, but has a set of horns on her head. She has a long stinger coated with poison to stab her prey with, and pincer-like mandibles on her mouth. Having lived underground so long, she hates light, and so when the hobbits enter her tunnel, the only thing that seems to deter her is the star-glass that Galadriel gave Frodo. If her prey is crafty and manages to get past her, then they will reach yet another problem. As if it is not enough that the tunnel Shelob lives in twists and winds enough to make anybody lost, but the one exit has been blocked with a great spider-web Shelob herself spun. However, as Frodo and Sam discovered that it is not completely impenetrable. Sting - Frodo's elven sword - can cut through it.

Shelob is very hard to kill, and the only person to have ever managed to subdue her is Sam, who stabbed her through the layers of her stinking flesh (where it is more vulnerable) deep enough to leave - not a fatal wound - but an injury that drove her away and would keep her sulking for quite a while. 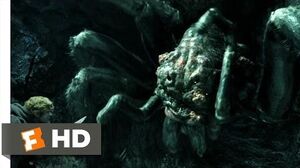 Retrieved from "https://villains.fandom.com/wiki/Shelob?oldid=3775183"
Community content is available under CC-BY-SA unless otherwise noted.