Assist Scar with his plans to become king in order to eat freely (succeeded, but later turned against him).

Shenzi, Banzai, and Ed are the secondary antagonists of Disney's 32nd full-length animated feature film, The Lion King, and its upcoming 2019 remake, and the main antagonists of its 2004 midquel, The Lion King 1½, despite having little screen time. They are members of the Hyena Clan that acted as Scar's former henchmen.

Shenzi is the only female of the trio. She is very confident, hopeful, collected, malicious, vicious, intelligent, menacing, jokey, ruthless, manipulative, maniacal, and constantly scheming. This makes her the de facto leader of the trio, and probably the entire clan, a trait consistent with true spotted hyenas; females are usually larger than the males and dominate them. This also makes her the de-facto secondary antagonist in the first film and the de-facto main antagonist in the midquel.

She comes up with the idea of telling Scar that Simba is dead after he escapes, confident in the belief that he will never learn otherwise, and is confident enough to tell him that there is no food or water left. Her distinguishing features are three prominent bangs hanging over her face and a mane that reaches all the way to her bangs. She also lacks the dark gray "stubble" snout of the males, and the dark patches around her eyes are shaped to resemble heavily applied eye-shadow.

Her full name, according to The Lion King 1½, is Shenzi Marie Predatora Vendetta Jackalina Hyena. Shenzi was originally going to also be male and played by Tommy Chong, reuniting him with his old comedy partner Cheech Marin, who was playing Banzai.

Banzai is the most aggressive of the trio, usually speaking in a raised voice, with a shorter temper than Ed or Shenzi, and always ready to get into a fight. But since he usually thinks with his muscles, he still submits to Shenzi. Although he talks big, he (along with the other hyenas) is really cowardly. He is also extremely greedy, talking about food frequently. Otherwise, Banzai is apparently just as intelligent as Shenzi, knowing a few languages like pig Latin, Spanish, and French. His distinguishing feature is his unusually heavy eyebrows, but apart from these he is the model for most generic hyenas.

Ed converses entirely through obnoxious chuckling and sports a permanently foolish grin. He is heavily implied and has proven to be mentally ridiculous, imbecilic, and crazy. His eyes never seem to focus on anything appropriately, he has two round cuts on each ear and his tongue is almost always lolling out. He is famous for his foolishness, his craziness, getting his friends in trouble, giggling maniacally and obnoxiously at unnecessary times, and being absentminded and oblivious to his surroundings.

All three spotted hyenas are rather sadistic, goofy, obnoxious, vicious, ruthless, maniacal, argumentative, wise-cracking, sinister, and psychotic, most of all Ed, who is always cross-eyed with his tongue hanging out, and almost never speaks, only giggles. Shenzi is a female, while Banzai and Ed are males.

In the book "A Tale of Two Brothers" (which takes place many years before the first film), the then adolescent hyenas surround a helpless baboon named Rafiki who arrived in the Pride Lands. King Ahadi comes to the rescue just in time, with his adolescent sons Mufasa and Taka close behind him where Ahadi chides the hyenas, telling them that they already ate because it is against the rules to hunt for sport in the Pridelands, and commands the hyenas to leave Five Stones. After their failed hunt, the hyenas skulked at a distance from Pride Rock, complaining about Ahadi and his constant supervision. Banzai and Shenzi exchanged complaints about the king and advocated the ushering in of a new era, amusing that with Mufasa dead, they would be able to rule the Pride Lands. Later, Shenzi advises Taka to make himself look good by making Mufasa look bad. Taka has decided to incite a greedy and selfish buffalo named Boma to fight Mufasa. But the plan didn't turn out so well, and Taka's eye was wounded by the buffalo herd in the process, and hences the name "Scar" from then on.

They are seen in the book, "Friends in Need", where they are preparing to boil a young Zazu until Prince Mufasa passes by, and scares the hyenas away next.

They re-appeared as the main antagonists in The Lion King 1½ (which takes place before, during and after the first film) though their role in the film is small.

In their first appearance, they attack a meerkat colony when Timon, who is the sentry on duty of the colony, is daydreaming. They fail to catch any meerkats, but this incident drives Timon to leave the colony to find where he truly belongs.

The hyenas make an appearance again during the film's climax at Pride Rock. Eventually, Timon and Pumbaa are cornered by the hyenas when attempting to get them away from Simba as he goes to fight Scar. Timon proposes to Shenzi as a desperate move to buy time for his mother and Uncle Max as they dig a tunnel, which she turns down abruptly. Then, the hyenas fall into the tunnel, which transports them to the ground just in time for them to confront Scar.

The Hyena Trio are the secondary antagonists in the first film. They appear in the Elephant Graveyard where they, under Scar's orders, chase the young Simba and Nala in an attempt to kill and devour them in the first place, but they're scared away by Mufasa. Afterwards, they assist Scar carry out his plan to murder Mufasa by triggering the wildebeest stampede. Immediately after Scar tells Simba to run away and never return, he orders the hyenas to slaughter Simba as well, but Simba gets away from the hyenas as they can't follow him through the thorn-bushes he falls into. As Scar takes over the throne, he allows the hyenas to hunt around the grounds (much to their delight). However, as the years passed, the trio complain about the lack of food and water in the Pride Lands (to which Scar neglects); even Banzai secretly confesses to both Shenzi and Ed that Mufasa's reign was far more better than Scar's, implying some remorse over their role in Mufasa's death.

When Simba returns to Pride Rock to reclaim his rightful place as King, Scar angrily stares at the hyenas for failing to kill him, making them feel a little nervous. As Simba tries to chase and overthrow Scar, the hyenas join the fight, but most are defeated by the lionesses, and Shenzi and Banzai are ruthlessly beaten up by Pumbaa for trying to eat Timon and Zazu and calling Pumbaa a "pig".

When Shenzi, Banzai, and Ed overhear Scar trying to thrust all blame for the events on them to Simba, claiming that it was all their idea, they are angry and alert the rest of the clan of Scar's deception.

After Scar is defeated by Simba, he finds himself surrounded by the hyenas and greets them casually. However, they reveal they overheard him as he tries to explain that he didn't really mean what he said, but the hyenas we’re fed up with his broken promises of never going hungry again. Without hesistation, they close in to leap on Scar and fiercely rip him apart to his death. They then presumably eat Scar's body to satisfy their hunger, though this is unconfirmed.

They didn't appear in the sequel. Although they were mentioned by Nuka, who says that the graveyard has become more creepy ever since the hyenas left the Pride Lands.

It is possible that the hyenas Nuka mentioned weren't Shenzi, Banzai, and Ed, but several unnamed hyenas since hundreds were shown during the villains' song, and only some of them (Shenzi, Banzai, and Ed among them) were sent to the lower area where they eat Scar, and could possibly have been consumed by the flames. Those who did not fall below presumably returned to the elephant graveyard, and later "ran off". The fate of Shenzi, Banzai and Ed remains unknown.

The hyenas are set to appear in the first film's upcoming 2019 remake. However, whilst Shenzi keeps her name, Banzai and Ed will be renamed as Kamari and Azizi.

In the TV series, the hyenas are recurring antagonists, continuously intimidating Timon and Pumbaa. It should also be pointed out that significant plot points involving the three hyenas and Timon and Pumbaa in this series (particularly, the episode, "Once Upon A Timon"), have since been reconnected by the events that took place in The Lion King 1½.

The hyenas appeared in Kingdom Hearts II. Other hyenas appear as well, but while they're brown in color, the trio are still gray.

When Sora, Donald Duck, and Goofy show up in the Pridelands, they are met by the hyenas. The hyenas surround the three of them and try to crucify them, but Scar calls for them and they reluctantly leave. The hyenas attack them again and Scar plans to eat them but Nala knocks him down and allows Sora, Donald, and Goofy to get away.

Later, the hyenas are seen at Pride Rock during the final battle between Simba and Scar. The hyenas attack Timon and Pumbaa but they are attacked by Sora, Donald, and Goofy. They run away and are exiled after Scar's death.

Later on, Sora, Donald, and Goofy are wandering across the landscape when they see the hyenas running towards the three of them. Upon realizing it is them, they stop, displeased that they're not the meal they thought. Then, they giggle when Sora mentions Simba, who is being tortured by Scar's ghost.

Simba and the trio confront the hyenas again. The hyenas tell them to leave them alone. Simba asks if they know anything about Scar's ghost. They run away but the three of them are caught soon enough. Simba realizes they know nothing of Scar's ghost. Soon, Scar's ghost arrive though, and frightens Simba away. The hyenas laugh at his nervousness and depart. 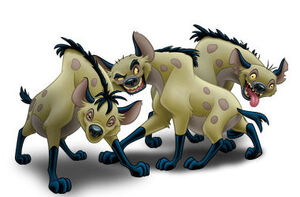 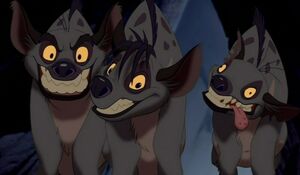 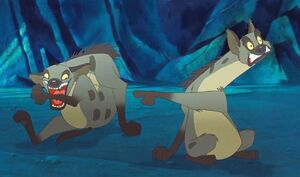 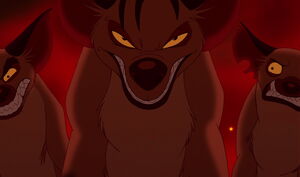 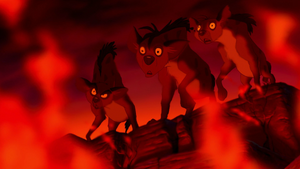 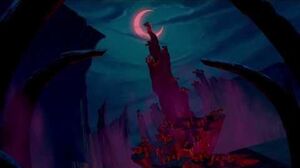 Retrieved from "https://villains.fandom.com/wiki/Shenzi,_Banzai_and_Ed?oldid=2535086"
Community content is available under CC-BY-SA unless otherwise noted.