Kenneth Drayden better known in Link Vrains as The Shepherd is a major antagonistic character in the second season of Yu-Gi-Oh! Vrains and a major supporting character in the third season. A mercenary and bounty hunter The Shepherd is hired to hunt people down with androids and artificial intelligence being his favored targets. He is also the older half-brother of Emma Bessho aka Ghost Gal.

He was voiced by Takanori Okuda in the Japanese version, who also voiced Young Xehanort in Dream Drop Distance and by Danny Kramer in the English version.

Kenneth himself appears as a male with purple eyes and purple hair, a cybernetic right arm after losing his organic one, and a scar beneath his right eye. Kenneth's outfit consists of a light blue trench coat, gray pants, black shoes, a black glove over his right hand, and typically wears a maroon scarf over his face and sunglasses.

As The Shepherd, Kenneth wears a gray balaclava mask with red and blue accents and pink eyes over his face with a purple and green hat, a black, green, and purple trench coat with purple and green shoulder pads, black pants and black and red boots with spurs, and unlike in his human form, his cybernetic arm is not concealed.

Kenneth's father left him and his mother at a young age making Kenneth bitter towards him which was made worse years later when he moved next door to his father and the new family he had started which included his half sister Emma Bessho. Kenneth cared deeply for his mother, often taking her out on fancy dinners for her birthday and even intended to attend college for his mother, however one night would change Kenneth's life forever. Kenneth took his mother out to a restaurant for her birthday where they talked about their lives with Kenneth's mother wondering if he would still graduate college which Kenneth confirms that he will and even stated that he wanted to work to make her happy and decided to take her to another restaurant and the 2 got into an artificial intelligence manned taxi and during the ride noticed an accident ahead but while the ai driving the taxi was mapping out a different route, the ai malfunctioned and instead drove straight into the accident. Kenneth woke up in the hospital with a scar under his right eye and his right arm was completely broken and eventually had to be amputated, but the worst news Kenneth received was that his mother, while she had survived the accident, had sustained heavy injuries to her spinal cord, paralyzing her from the waist down and leaving her unable to walk. From that day on Kenneth developed a deep hatred for artificial intelligences and wanted to see them all destroyed.

Shepherd is first seen seated at a cafe in Link VRAINS where he is harassed by 2 avatars where he promptly deletes one and scares off the other and runs into Ghost Gal and talked about the bounty call from SOL tech from Queen that Shepherd accepted but Ghost Gal declined causing him to call her weak for turning it down. Soon Playmaker logged into Link VRAINS and he was instantly confronted by Shepherd who pointed out that Ai had returned to him and Ai summoned a data storm causing Shepherd to log out due to the danger. All throughout Playmaker's hunt for Bohman Shepherd hunts down him and Soulburner, Even using Soulburner's greatest fear: the card "Despair from the dark" against him unaware that Soulburner had long beaten his fear of the card. Soon Shepherd began hunting the Ignis Aqua but is stopped by Skye and Emma (Blue Gal and Ghost Gal respectively). As Skye leaves with Aqua, Emma takes on Shepherd in a deletion duel, although Shepherd wins he decides to spare Emma and not delete her avatar. Later Kenneth and Emma arrive and their father's grave and Emma said their father wanted Emma and Kenneth to look out for each other. Later Kenneth watches as George Gore duels Earth and calls Gore foolish for having and Ai chip installed into his brain, and is later shocked to learn SOL tech's intentions with the Ignis. Later Shepherd duels against Varis and loses with Varis giving Shepherd some words of advice. Shepherd then finds out the Ignis Lightning's location and challenges him to a duel in which he ultimately loses with he and Emma sharing a sibling heart to heart before he fades away.

More to be added 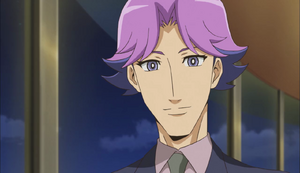 Kenneth before the accident 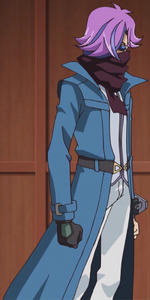 Kenneth with his face concealed