NOTE: This article is about the incarnation of Shere Khan from the 1994 movie. The mainstream version can be found here: Shere Khan (Disney).

Ruler of the jungle

Hunting and ruling the jungle.

Shere Khan is a major antagonist (later anti-hero) of the 1994 live-action adaptation of Rudyard Kipling's The Jungle Book. He is a ferocious Bengal tiger who is the fierce and dutiful protector of the jungle and seeks to drive away humanity, as well as take revenge on those who kill animals for sport.

His vocal sound effects were provided by Frank Welker.

Shere Khan is similar to his animated counterpart as he despises humanity to the full extent. However, unlike his animated counterpart, it turns out that the true reason behind his hatred of humanity is because of several hunters' desire of hunting down animals for fun rather than for food, an act that angers him so much. He is also willing to strike down anyone who tries to attack him. This was shown when the local guide Nathoo courageously fought against the tiger to save Buldeo, resulting the tiger to maul Nathoo to death, though it is only in self-defense rather than out of malice as Shere Khan had no intention in killing Nathoo (since the latter never broke the jungle law).

Despite his hatred of humanity, Shere Khan is willing to spare those who are willing to oblige to the jungle law; this was shown when he was only targeting the hunters (including Buldeo) for shooting down several animals for fun while leaving the other humans alone. He even spared Nathoo's son Mowgli when the latter roared back at him in defiance, seeing him as a fellow creature in the jungle and even moaning and chuffing at him as a sign of remorse for killing Nathoo; he even did the same to Kitty Brydon (since she is a fellow animal lover who never broke the jungle law).

In the beginning of the film, Khan spots Buldeo and two soldiers hunting down several animals for fun, and becomes enraged at this. He proceeds to attack the camp, killing the two soldiers and the local guide Nathoo, who was trying to defend Buldeo, who ungratefully left Nathoo to be mauled to death by the tiger. This event led Nathoo's son Mowgli to be separated from civilization and to be raised by the wolf pack until he became a young adult.

Khan appears again when he spotted the corrupt William Boone, Buldeo, and their men trying to seek Monkey City (the home of King Louie and the Bandar Log, as well as Louie's treasure guardian snake Kaa) to find its hidden treasure. Khan then chases down Lieutenant John Wilkins (one of Boone's men) and proceeds to maul him to death in revenge for shooting down Baloo. After Buldeo is buried alive inside Monkey City while Boone gets killed by Kaa, Khan confronts Mowgli and the Colonel's daughter Katherine 'Kitty' Brydon as he distrusts all humans in general. He tries to roar at Mowgli to make him run for his life, but Mowgli roars back to stand his ground. At that point, Khan sees Mowgli as a 'fellow creature of the jungle' and decides to spare him; even moaning and chuffing at him as an apology for killing Nathoo. Because of this, Shere Khan allows both Mowgli and Kitty to leave peacefully. 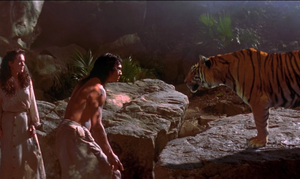 Mowgli facing off against Shere Khan while Kitty watches.

Shere Khan sparing Mowgli after the latter roared back at him, even moaning and chuffing at him as an apology for killing Mowgli's father.

Shere Khan on the Heroes Wiki