Ruler of the jungle (in the films), Businessman and CEO of Khan Industries (in Talespin)

Hunting and ruling the jungle (in the Jungle Book films), making money and overseeing business meetings (in Talespin)

To kill Mowgli (all films)
To expand his business (in Talespin)

Shere Khan (sometimes spelled as: Shere-Khan) is the main antagonist of Disney's 19th animated feature film The Jungle Book and its 2003 sequel The Jungle Book 2. He was also an anti-hero in TaleSpin, Jungle Cubs, and the 1994 live-action film Rudyard Kiping's The Jungle Book. He is Mowgli's arch-nemesis.

Shere Khan is a large and powerful tiger known for his sadistic, cruel, intimidating, and vicious attitude. Everyone including Bagheera knows he's powerful, especially he himself, resulting in a very arrogant and boastful personality. He is very sophisticated and suave and shown to be incredibly polite when he wants to, but becomes incredibly dangerous when angered. All animals of the jungle fear Shere Khan and he is often known as the "Lord of the Jungle". The vultures addressed him as "Your highness." He puts on a cocky, yet friendly face, even when about to kill.

His only known fears are man's gun and man's fire which he overcame in the sequel as the climax took place in a temple surrounded in lava, though he didn't seem to care. This fear led to Shere Khan's vow to murder any human that entered his jungle which he has been known to do successfully with the exception of Mowgli. Shere Khan speaks with a British accent and openly thinks highly about himself seeing various other animals namely Colonel Hathi as "ridiculous". Although fellow villain Scar speaks with a British accent Shere Khan has a more gentlemanly, upper class accent saying phrases such as "Good Show". In his youth he spoke with an American Accent and was friends with Bagheera, Baloo, Hathi and Prince Louie but at some undetermined time he developed a strong British accent, lost his friends and became a predator.

Despite having been referred to and spoken of several times, he did not make a live appearance in the first film until about two thirds into it. He is first seen stalking a deer as prey. His hunt was ruined when Colonel Hathi came marching by with his heard and scared it away, much to Khan's disgust. After Bagheera stopped them, Shere Khan eavesdropped on their conversation and was delighted when he heard about Mowgli. After they had left, he began his hunt for Mowgli.

After searching some, he heard Kaa singing and became suspicious. He grabbed his tail and got him to come down. He politely questioned Kaa about Mowgli and Kaa acted strangely while answering his questions. Kaa's suspicious behavior prompted Shere Khan to search his coils for Mowgli, but still wasn't totally fooled when he didn't find him. He told Kaa if he did see him, he was to inform him first before continuing his search.

Later he heard the Vultures singing and investigated the occasion. He then found Mowgli and easily scared off the Vultures with the word "Boo." He intimidates Mowgli and after being impressed by his courage, gave him ten seconds to run away (mainly for his own enjoyment). Instead of running, Mowgli fetched a stick to fight off Khan, causing Khan to become annoyed. The second he reached ten, he attacked Mowgli, who's stick idea, of course, failed immediately, mostly due to Mowgli's sudden terror at seeing the power of Shere Khan. Baloo, arriving just in time, grabbed his tail before he could get to the boy. After a chase, the Vultures got Mowgli to safety.

Shere Khan then became furious, battled Baloo, and nearly killed him. The Vultures intervened, stopped him before he could, and stalled him while Mowgli tied a burning branch to Khan's tail. Khan then became terrified and tried to put out the fire, but failed. He then fled with burning branch still tied to his tail, greatly humiliating him.

Sometimes after the events of the first film Shere Khan returns in The Jungle Book II. He appears much earlier than in the previous film where he is first seen crushing a makeshift version of Mowgli's head with his paw. Furious at Mowgli for humiliating him, Khan was determined on getting his revenge on Mowgli by killing him once again. Shere Khan then made his way to the Man-Village where Mowgli now lived. He snuck quietly past the sleeping villagers. He heard one of Mowgli's friends, a girl named Shanti, call out his name and found Mowgli's house. He then waited impatiently for the Man-Cub to show himself. However, he was chased off by the villagers just as he saw Baloo and Mowgli heading into the jungle. He interrogated Kaa on Mowgli's whereabouts; Shere Khan believes Kaa knows where Mowgli is (after hearing him say "Man-Cub"). But truthfully, Kaa has no idea where Mowgli is, but Shere Khan won't believe him, and continues to threaten the python. To save his skin, Kaa fearfully lies to the tiger that Mowgli's at the swamp, allowing him to flee.

When Shere Khan arrives at the swamp with Mowgli nowhere to befound, he splashes the water in fury "That snake lied to me!" Shere Khan was then annoyed by Lucky, the newest part of the vulture gang. However, he gets alerted of Mowgli's actual location from the unwilling Lucky, whom he seemingly killed as revenge for his utter annoyance. Later, Khan encounters Mowgli, Shanti, and Ranjan. He chases down Mowgli to a place of ruins with a moat of lava. After confusing Khan, one of the gongs fell off, revealing Shanti. Mowgli revealed himself and Shere Khan chased them both after being held off by Baloo. In the end, he gets trapped in the lava gorge with a large head on top. Lucky (who has survived Khan's attack, but is left bruised) came back and annoyed him even more as retaliation for attacking him, much to Khan's distraught.

Shere Khan appeared, in a more anthropomorphic form, in the television series TaleSpin as one of the recurring antagonists (and sometimes an anti-hero). His character, while still villainous, had taken on a more corporate identity, as he serves as the CEO of his very own corporation Khan Industries (founded by his ancestors). He wears a white shirt, a red tie, and a blue suit, but he still goes barefoot.

Depicted as a stereotypical businessman that owns his business and a fleet of planes and navy to protect his shipping and business interests worldwide, Shere Khan is extremely ruthless and willing to do anything to make money to expand his business by running smaller companies out of business; at one time in the episode "On a Wing and a Bear", he barged a deal with the infamous Don Karnage (the main antagonist of the series) and his band of Air Pirates to create an artificial oil shortage so he could extort higher prices from the public.

However, despite his threatening and villainous presence, Khan holds a sense of morals and honor, as he would be more than willing to aid those who have helped him, proving himself more of an ally than a villain. For one example, in the story arc "Plunder and Lightning", Shere Khan learns of a horrifying event that Karnage and his Air Pirates have created a large gun that can utilize electricity to destroy Cape Suzette, and without hesitation, Khan calls in his navy to protect the city from the Air Pirates at all costs. In another episode "From Here to Machinery", his plane is being attacked by the Air Pirates, and the robot pilot (created by the sleazy Professor Torque) is unable to deviate from its flight programming, causing an arriving Baloo to take action by destroying the robot and taking control of the plane to evade the pirates, an act that has impressed Khan and causing him to develop a certain respect for Baloo's piloting skills.

This version of Shere Khan also makes a cameo on a mugshot in Darkwing Duck and Bonkers. This Shere Khan is also similar to Animalia villain "Tyranicus Tiger" due to them both wearing human clothing and being the head of a large corporation. He was voiced by the late Tony Jay.

Shere Khan appears as a cub in the animated series Jungle Cubs. In this series it shows that Shere Khan was originally friends with Baloo, Bagheera, and others. Shere Khan was more of a bully and cocky in the series rather than a dangerous predator. Shere Khan tags along with Baloo and their friends on many adventures.

Shere Khan also appears in the 1994 live-action film, being portrayed by a real tiger. However, Shere Khan is presented as a more sympathetic character in this film. Khan appears rarely and instead serves as a major antagonist (later anti-hero) in the film while a greedy British captain named William Boone (portrayed by Cary Elwes) serves as the main antagonist of the film. Unlike his animated counterpart, Khan refuses to kill for sport, and his sole goal is to protect the jungle from those who break its "laws," namely humans who kill animals for fun instead of food. He is described by Colonel Geoffrey Brydon (the film's narrator) as "the jungle's royal keeper," and by the infamous hunter Buldeo as the "king of tigers."

In the beginning of the film, Khan spots Buldeo and two soldiers hunting down several animals for fun, and becomes enraged at this. He proceeds to attack the camp, killing the two soldiers and the local guide Nathoo, who was trying to defend Buldeo, who ungratefully left Nathoo to be mauled to death by the tiger. This event led Nathoo's son Mowgli to be separated from civilization and to be raised by the wolf pack until he became a young adult.

Khan appears again when he spotted Boone, Buldeo and their men trying to seek Monkey City (the home of King Louie and his group of monkeys, as well as Louie's treasure guardian Kaa) to find its hidden treasure. Khan then chases down Lieutenant John Wilkins (one of Boone's men) and proceeds to maul him to death. After Buldeo is buried alive inside Monkey City and Boone is killed by Kaa, Khan confronts Mowgli, distrusting all humans in general. He tries to roar at Mowgli to make him run for his life, but Mowgli roars back to stand his ground. At that point, Khan sees Mowgli as a 'fellow creature of the jungle', deciding to spare him and allowing him and the Colonel's daughter Katherine 'Kitty' Brydon to leave the jungle in peace.

Shere Khan is first seen attending the jungle meeting called by Hathi. He then contemplates on who he is going to eat, with his sidekick, Tabaqui, the hyena, telling jokes about it, much to the tiger's annoyance. He then decides to hunt man, claiming to have a craving for "Indian food". He and Tabaqui then ambush some humans visiting the river, but when he is shot at by hunters, he flees and is assumed dead. Years later, he reveals himself alive to the wolf pack and demands that Mowgli be given to him, but Akela refuses, and Shere Khan swears revenge. He is later seen conspiring with the wolf pack bullies about separating Mowgli from the pack, which succeeds. He and Tabaqui then conspire with the chimps about separating Mowgli from Bagheera and Baloo.

In the 2016 live action remake of the 1967 film, Shere Khan, voiced by Idris Elba, appears once again as the main antagonist. In this incarnation, Shere Khan has a burn scar on the left side of his face, sustained in a fight with Mowgli's father. 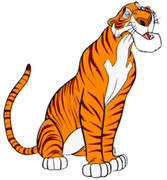 Shere Khan, as he appears in the original film

Shere Khan as a young cub in Jungle Cubs

Shere Khan, as he appears in the 2003 sequel

Shere Khan as he appears in Talespin

Shere Khan in his office

Retrieved from "https://villains.fandom.com/wiki/Shere_Khan_(Disney)?oldid=1469563"
Community content is available under CC-BY-SA unless otherwise noted.