Shere Khan is one of the many versions of the eponymous character in the short story collection The Jungle Book, written by the late Rudyard Kipling, and the main antagonist of the anime series Jungle Book Shonen Mowgli, and is quite faithful and authoritative to the literary version, except for some minor differences.

He is a recalcitrant and dangerous tiger who violates many laws of the Jungle, including eating humans and cows and over-hunting. He has to his service hyenas and monkeys (and his right arm is the most trusted hyena Tabaqui) and is also the one who pushed the path of the evil Grizzle, a wolf once part of the Seeonee Wolf Pack.

He also appears as the boss of Alba.

He was voiced by the late Shigezou Sasaoka in the Japanese version, and David Hemblen in the English dubbed version.

Shere Khan is also fearless and indomitable of most things, except that he is a pyrophobe (or one who fears fire), he is frightened by guns and he withdraws when it comes to an elephant named Hathi.

His loathing for humans is part of a history that goes back to his first ancestor's encounter with one. The injury on his right, hind leg is dealt by Alexander in a fight.

Later, other injuries he would receive include: A piercing being made in his forehead after Mowgli attacks him with a long, narrow, sharp-edged rock; the wound over his left eye being made. Again by Mowgli, slashing it with a blade in requital for slashing Mowgli's left thigh and harming one of his new human friends/future family members, leaving the tiger disfigured.

In the last showdown, Mowgli defeats and slays Shere Khan by stabbing him in one of his sides. 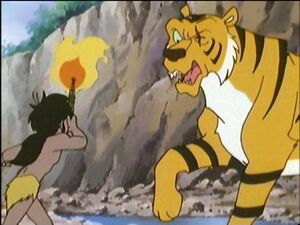 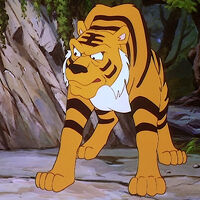 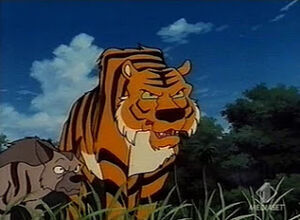