Archenemy of Mowgli
King of The Jungle (formerly)

Manipulate the Wolf Pack against Mowgli and Akela (succeeded).

Misanthropic Man-Eater
Shere Khan is a Bengal tiger and the main antagonist of Rudyard Kipling's The Jungle Book. He is the archenemy of Mowgli and seeks to kill him at any cost.

Shere Khan was depicted by the late British author Rudyard Kipling as being born with a crippled leg and derisively nicknamed Lungri (The Lame One) by his mother. Despite this setback, the Shere Khan character is arrogant and regards himself as the rightful lord of the jungle. The only creature who looks up to him is Tabaqui, the cowardly and despised golden jackal.

In "Mowgli's Brothers", Shere Khan's failed attempt to hunt humans causes a human "cub" to stray from his parents. When Shere Khan discovers the infant, it has been adopted by Indian wolves, Raksha and Father Wolf, who have named the child Mowgli. Mowgli is accepted into Akela's wolf pack and protected by Bagheera and Baloo. Furious at losing his kill, the tiger swears that the boy will be his some day. While Mowgli is growing up, Shere Khan infiltrates the wolf pack by promising the younger wolves rich rewards once Akela is deposed. When the young wolves maneuver Akela into missing his kill, the pack council meets to expel him. Shere Khan threatens to take over their hunting territory if the wolves do not give him Mowgli. Having been warned by Bagheera, Mowgli attacks Shere Khan and his allies with a burning branch and drives them away. Akela leaves the pack to become a lone hunter. Mowgli goes to the human village, but swears that he will return one day with Shere Khan's skin.

Shere Khan also appears in "How Fear Came", which is set during the first half and the second half of "Mowgli's Brothers" whilst at some point after "Kaa's Hunting". Coming down to get a drink of water during the Water Truce after killing a human for pure sport and not for food while boasting about it being his night, leading Hathi the elephant to explain to everyone including Mowgli why tigers alone out of all of the animals are allowed to hunt humans for food and even for pleasure for one night, while also explaining how tigers got their stripes and how humans and tigers ended the peace in the Jungle.

In "Tiger! Tiger!", Mowgli is adopted by Messua and her husband and learns human ways. In this short story, Mowgli learns the villagers have heard of Shere Khan, whom they refer to as the lame tiger, and claim that he has a price on his head, but believe that he is lame because he is the reincarnation of a money-lender who was injured in a riot. When Mowgli scoffs at these fanciful tales, the villagers decide to put him to work herding buffalo. He then meets his wolf friend Grey Brother, who tells him that Shere Khan is still planning to kill him. Grey Brother forces Tabaqui to tell him where and when Shere Khan is planning to strike; he then kills the jackal. With the help of Akela, Grey Brother and Mowgli trap Shere Khan in a narrow canyon and incite the buffalo to stampede him to death. 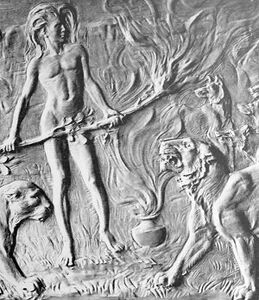 Retrieved from "https://villains.fandom.com/wiki/Shere_Khan_(Rudyard_Kipling)?oldid=4068078"
Community content is available under CC-BY-SA unless otherwise noted.