NOTE: This article is about the incarnation of Shere Khan from the 1990 TV series. The mainstream version can be found here: Shere Khan (Disney).

Shere Khan is a recurring antagonist and occasional anti-hero in the animated Disney television series TaleSpin. He is the stingy, but sophisticated CEO of Khan Industries and enemy of Baloo.

He was voiced by the late Tony Jay, who later voiced his mainstream counterpart in The Jungle Book 2, and who also played Galactus in the 1994 Fantastic Four TV Series, Baron Mordo in Spider-Man: The Animated Series, Khartoum in Disney's Aladdin series, Megabyte in the ReBoot TV series, Monsieur D'Arque in Disney's Beauty and the Beast, the Transcendent One in Planescape: Torment, and Judge Claude Frollo in Disney's The Hunchback of Notre Dame.

Depicted as a stereotypical businessman that owns his business and a fleet of planes and navy to protect his shipping and business interests worldwide, Shere Khan is extremely relentless and willing to do anything to make money to expand his business by running smaller companies out of business; at one time in the episode "On a Wing and a Bear", he barged a deal with Don Karnage and his band of Air Pirates to create an artificial oil shortage so he could extort higher prices from the public.

However, despite his menacing and villainous presence, Khan holds a sense of morals and honor, as he would be more than willing to aid those who have helped him, proving himself more of an ally than a villain. For one example, in the story arc "Plunder and Lightning", Shere Khan learns of a frightening event that Karnage and his Air Pirates have created a large gun that can utilize electricity to eliminate Cape Suzette, and without hesitation, Khan calls in his navy to protect the city from the Air Pirates at all costs. In another episode "From Here to Machinery", his plane is being ambushed by the Air Pirates, and the robot pilot (created by the sleazy Professor Torque) is unable to deviate from its flight programming, causing an arriving Baloo to take action by eliminating the robot and taking control of the plane to escape the pirates, an act that has impressed Khan and causing him to develop a certain courtesy for Baloo's piloting skills. In "Louie's Last Stand", he saved Louie's from being blown up by his employee, Douglas Benson, and disliked how he broke a verbal on Louie. 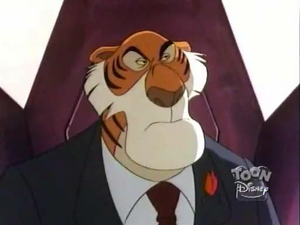 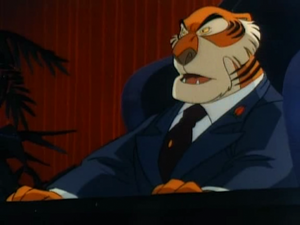 Shere Khan in his office. 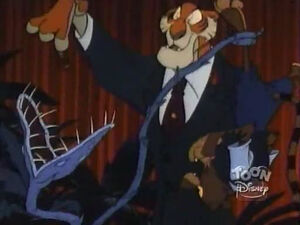 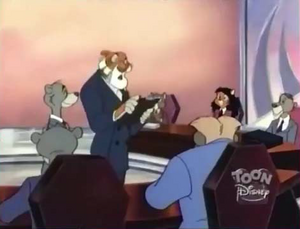 Shere Khan overseeing a meeting with his fellow employees. 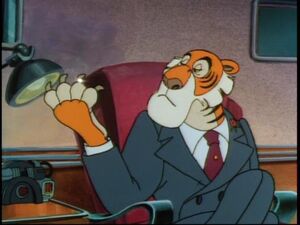 Retrieved from "https://villains.fandom.com/wiki/Shere_Khan_(TaleSpin)?oldid=4210372"
Community content is available under CC-BY-SA unless otherwise noted.