Leader of MERC
Sub-commander of the A.A.H.W. (formerly)

Watching events on his Improbability Drive.

Survive with the help of Jesus.

The Sheriff is a major antagonist in the Madness Combat series, serving as the face of the AAHW during the series' early episodes. He was the main antagonist of the Sheriff Saga (Madness Combat 2 and Madness Combat 3), repeatedly being hunted down by Hank J. Wimbleton for having put a bounty on his head. During these events, the Sheriff activates the first known Improbability Drive in the series, which plunges Nevada into complete chaos, making him a posthumous antagonist for the remainder of the series.

He reappears in MADNESS: Project Nexus as one of the game's secondary antagonists. Here he is seen leading his own faction, the Matter and Energy Reclamation Corporation, who attempt to stop Hank, Sanford, and Deimos from entering Nexus City.

The Sheriff's predominant role in Madness Combat 2 is simply him being pursued by Hank J. Wimbleton throughout the whole episode. After being chased through his headquarters, the Sheriff ends up cornered in his office. Hank confronts him and shoots his weapon, but Jesus rescues the Sheriff by sneaking up on Hank and shooting him in the head.

Hank is revived after the events of Madness Combat 2, and once more continues his pursuit of the Sheriff. Having watched his rampage through security cameras, the Sheriff grows desperate and activates an Improbability Drive, a device that tampers with reality itself. Hank survives the carnage caused by its activation, and the Sheriff once again ends up cornered. Jesus stabs Hank in the back with a sword, but Hank survives long enough to shoot both Jesus and the Sheriff in the head with his shotgun, killing them both. Hank then succumbs to his injuries.

The Sheriff returns in MADNESS: Project Nexus as one of the game's secondary antagonists, with him and MERC acting as the main antagonist for most of the game's early levels.

He is first encountered by Hank, guarding Nexus City's walls from intruders with some snipers. After a brief conversation, the Mag Bandit arrives, Hank having previously killed dozens of other Bandits. The Mag Bandit destroys a portion of Nexus City's wall, allowing Hank, Sanford, and Deimos to enter and causing the Sheriff to retreat to his headquarters.

After several levels featuring Sanford and Deimos, they blow a hole into the Sheriff's fortress and fight him, managing to corner him atop his own hideout. They spare him and force him to open the city's transit network so they can reach their destination, and the Sheriff warns them that just because he's square with them doesn't mean the MERCs are, and that they'd be coming after them since they just killed a large portion of them.

The game slowly reveals the role that the Sheriff played in the downfall of Nexus City, working alongside Dr. Christoff to stop the Nexus Core from completing Project Nexus. Prior to the events of the game, the Sheriff took command of the Matter and Energy Reclamation Corporation and, by extension, Nexus City's Industrial Sector, which their factories were located inside of. Him and the MERCs evacuated civilians into the Industrial Sector while the city was overrun with Zeds, and eventually destroyed and abandoned due to the death of Director Phobos.

The Sheriff is seen one final time in the game's post-credit scene, briefly talking to Dr. Christoff before the Employers arrive and interrupt them. 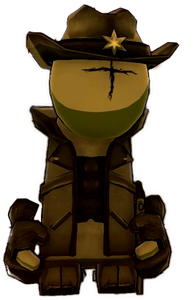 The Sheriff in Madness: Project Nexus 2. 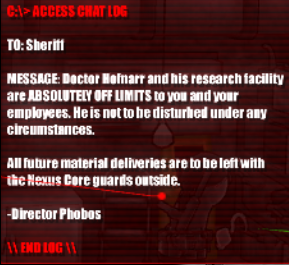 A message sent by Phobos to the Sheriff.