Sheriff Leena Reyes (simply known as Leena Reyes) is a recurring character in Sleepy Hollow. She is the new head Sheriff of the Westchester County Police Department in Sleepy Hollow, replacing the late August Corbin and Frank Irving.

She was portrayed by Sakina Jaffrey.

Back then, Leena was a sheriff on the police force. Leena recalled to have known Abbie, Jenny and Lori Mills, and responded to some of the calls she would get from them. She was also responsible for the admittance of Lori in Tarrytown Psychiatric Hospital.

Afterward, Leena transferred to Border Patrol. When the sheriff's position opened up in Sleepy Hollow, she reclaimed it.

Leena Reyes became the new sheriff when Frank Irving confessed to the murders of Devon Jones and Father Boland, which was actually committed by a possessed Macey who murdered them in cold blood and Frank was protecting his daughter from going to prison. Leena is from Sleepy Hollow but she was part of the US Border Patrol on the Texas-Mexico border before she returned to Sleepy Hollow as the new sheriff. Leena first appeared in the episode, "The Kindred," meeting Abbie after she arrived late in on roll call. Leena explained to Abbie that she meant business and planned on stopping whatever was going on in Sleepy Hollow and implied that Abbie would be a great asset by helping. Leena later showed up in police archives and discovered Jenny smuggling firearms. Leena turned heel when she later arrested Jenny and placed her in jail, and after the arrest, the evil Leena confronted Abbie and expressed her indifference towards Jenny and having Ichabod as a consultant; wanting him out of police work. She then attended Frank's interrogation, where she felt institutionalizing him would be best, cementing Leena's brief heel turn.

In the episode "Root of All Evil", it is revealed that Leena knew Abbie and Jenny Mills' birth mom Lori Roberts when they were children cause she tried to kidnapped them. It was Leena's testimony that led to Abbie and Jenny's mother being institutionalized at Tarrytown Psychiatric Hospital. In the "Root of All Evil", Leena Reyes gives Abbie a Tarrytown file containing the truth about her mother.

When Leena got the chance to speak with Jenny, she told Jenny that it would be best if she got herself together because she'd hate to see her end up like her mother. Afterward, Leena arrived during a robbery, where she shot a culprit dead to defend Abbie. When seeing Ichabod around headquarters again, she wasn't pleased with his presence. She admitted to looking up Ichabod and finding no files on his existence and that until he back himself up with provable documents, can return to the department. Trying to provide funding for the department, Leena went out hunting with the state official, unaware of a possessed Jenny trying to murder her.

Sheriff Reyes was finally won over by both Witnesses in "Deliverance", when she acted on the tip given by Abbie to raid the warehouse belonging to the Hellfire Club. Very impressed by Ichabod's work, she stated for him to keep in touch. Another time, the police department started getting calls about suicides in Tarrytown psychiatric, in fact caused by the ghost of Gina Lambert. Leena gave the case to Abbie, and allowed her full control. She admitted to trusting Abbie's instincts.

Leena is a strict, blunt and fearless sheriff. When she became apart the sheriff's department again, she proved that was determined to stop the murders around Sleepy Hollow. She also has a no-nonsense attitude, and will arrest anyone for breaking the law. Regardless of Jenny being Abbie's sister, she arrested her for an illegal crime and confronted Abbie right afterward. Leena has also shown to be extremely stern, striking Ichabod with intimidation and making him very wary of crossing paths with her.

However, she can be bluntly sympathetic to others. When speaking to Abbie about the state of the town's "sanity". She apologized to Abbie, in regards to her past, saying it was a poor choice of words. She also told Jenny that she'd dislike to see her end up like her mother. 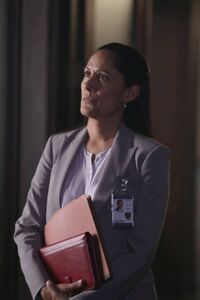 Retrieved from "https://villains.fandom.com/wiki/Sheriff_Leena_Reyes?oldid=3370265"
Community content is available under CC-BY-SA unless otherwise noted.