Son of a Gun

Opressor
Sheriff Toothpick is a corrupt armadillo sheriff and is the villain for Go West, Young Raccoon. In the second chapter of the video game Sly 4: Thieves in Time, Sly and the Gang go back to the Old West to help Sly's ancestor "Tennessee Kid" Cooper. In the process, they encounter the armadillo who rules the settlement with a deranged whim.

Prior to the events of the game, Bentley finds out that "Sheriff Toothpick" is actually an Eastern European gangster. He grew up loving Westerns and gold, never knowing that he would one day have the opportunity to live out the experience. He received his chance when he was approached by Cyrille Le Paradox to capture Tennessee's cane gun while leaving him to have free reign.

He is one of the supporting antagonists in which he first appears at the beginning of the level, Toothpick is simultaneously holding a festival in honor of himself and arranging for Tennessee Kid's hanging after framing the outlaw for Toothpick's gold theft. Sly purposely gets himself arrested by enraging Toothpick by vandalizing his posters, stealing a Cuban lollipop and unhooking a massive banner in his honor. After helping Tennessee Kid escape, Sly and the Gang tail Toothpick to his hidden vault where he holds Tennessee Kid's gun.

Toothpick has the Gang's van stolen in order to use its time machine components in order to pull off a heist aboard a train carrying his stolen gold. Sly and his allies rid the train of its gold as Tennessee moves ahead to confront the armadillo, only to end up defeated when Toothpick throws him off and steals his cane-gun. Sly moves in to take out Toothpick using the train's furnaces, whistles and valves. Despite being horribly burned in the process, Toothpick survives and is thrown off alongside Tennessee Kid.

In the credits, Bentley mentions that the trapped Toothpick was sentenced to work in a chain gang building railroads in the time period, eventually going deaf from the constant train whistling. The final picture showing Toothpick's situation implies that he "faded into obscurity" after being run over by a train he couldn't hear the warnings of the gang from the oncoming train.

Toothpick is a psychopath that takes delight with indulging both his lust for gold and acting out the part of the Western sheriff. However, he is shown to be quite the arrogant figure, as evident by the banners all dedicated in his honor, the constant festivals and his virtually nonstop public announcements of how his henchmen will bring him a birthday cake. He is also quite abusive to his henchmen, particularly notable in his announcement that they shall work overtime for no benefits. His arrogance is also evident in his combat skills, as he is very trigger-happy and assumes he is more clever than his opponent.

Toothpick also demonstrates some very odd abilities. When enraged or put under heavy stress, the armadillo grows to gargantuan size and attempts to stomp out the source of the stress. He also demonstrates the ability to create multiple miniature tornadoes and whirlwinds, which prove quite formidable when he is confronted.

Toothpick, back when he was a gold-stealing mobster 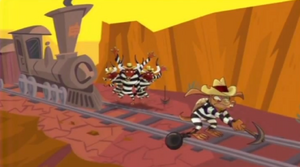 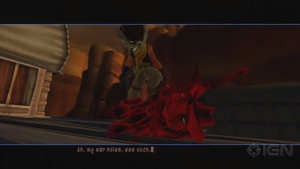 Toothpick defeated
Add a photo to this gallery

Retrieved from "https://villains.fandom.com/wiki/Sheriff_Toothpick?oldid=3881713"
Community content is available under CC-BY-SA unless otherwise noted.