Sheriff Zapata is an antagonist from the 2008 puzzle platforming video game LittleBigPlanet. He is the corrupt sheriff of Boom Town and Uncle Jalapeño's arch-nemesis.

Zapata serves as the corrupt and wicked sheriff of Boom Town, making life hard for residents, who he sometimes imprisons for no reason other than he feels like it. This includes his archenemy, Uncle Jalapeño, one of the friendly skeletons in town. One day, he throws Jalapeño in a cell for kicks, and Sackboy rescues him by blowing the jail up with bombs. Zapata flees into the mines, and Sackboy and Jalapeño give chase.

After entering the mines, Sackboy and Jalapeño do not find Zapata anywhere, but minions he left behind. Sackboy fights them off and travels through the perilous mines, soon finding the entrance to the ancient Serpent Shrine. Jalapeño thinks Zapata may have escaped inside, so the two enter.

Jalapeño warns Sackboy of the fiery serpents inside, telling him to save himself for his confrontation with Zapata. Sackboy navigates through the ancient and booby-trapped shrine, fighting off Zapata's goons until reaching the end of the shrine, where Zapata is waiting. Zapata challenges Sackboy, and begins throwing bombs over a flaming wall as well as timed explosives. Sackboy must grab the timed explosives while dodging the bombs and drag them to the wall, allowing enough of them to blow the wall down. Zapata flees to the next section, where he throws more times explosives and rapidly shoots bombs. Sackboy must again dodge the bombs and the moving floor of the shrine, throwing the timed explosives into a pile of explosives underneath Zapata and blowing him up.

Though assumed dead after being blown up, Zapata makes a cameo appearance in LittleBigPlanet Karting.

Sheriff Zapata is openly evil, claiming "being evil rocks". He is vile and cruel, abusing his position of power to oppress people and hurt those he does not like. He is cocky and arrogant, giving Sackboy Jalapeño's location believing that he cannot help him, and facing off against Sackboy with confidence he will triumph. He loves explosives and is not afraid to use them, cackling evilly while trying to explode his enemies. 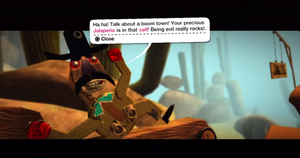 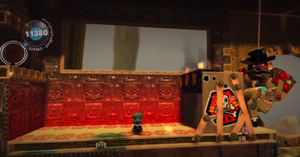 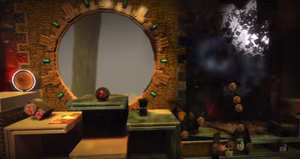 Zapata's defeat.
Add a photo to this gallery 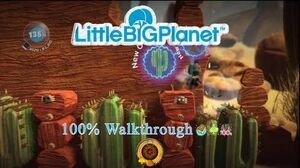 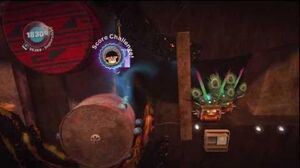 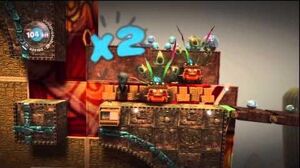 Retrieved from "https://villains.fandom.com/wiki/Sheriff_Zapata?oldid=3891835"
Community content is available under CC-BY-SA unless otherwise noted.