The Sheriff of Nottingham

Stay on Prince John's good side.

The Sheriff of Nottingham is the secondary antagonist from Disney's 21st full-length animated feature film Robin Hood, which is based on the legendary heroic outlaw of the same name.

The Sheriff was originally shown to be an honorable, otherwise greedy individual. He was charged to collect the taxes by Prince John. In contrast to Prince John (who is the villainous mastermind behind the many plans to stop Robin Hood), the Sheriff is a more active antagonist, constantly fighting and attempting to capture Robin Hood.

He is unsympathetic and thoughtless to the poverty of the townspeople, using immoral ways to collect taxes, such as forcing out the coins that Otto had hidden in his leg cast, regardless of the pain the blacksmith would endure from his broken leg in the process, or taking the single farthing that was in the church's poor box and laughing as he did it.

Due to this, he is hated by the people of Nottingham, who often derisively refer to him as "Bushel-britches", referring to the Sheriff's rather overweight physique. Despite his constant attempts to capture Robin Hood, he always fails. In addition, he is always fooled by Robin Hood's disguises, despite his claims to the contrary.

Despite this, he is shown to be very intelligent and smart, as he was baffled by Prince John's unexpected claim that Robin Hood should be released, and immediately grew suspicious of John's tyrannical and dangerous behavior, with his suspicions being confirmed when he found Little John holding the prince hostage via knife-back. The Sheriff commands a treacherous posse of archer wolves, and has authority over Trigger and Nutsy.

Unlike most Disney villains, the Sheriff is a cheerful and enthusiastic character, but he seems to be temperamental, short-tempered, argumentative and cantankerous. He also speaks with a heavy Southern United States accent, which is likewise derived directly from British dialects which most characters speak in.

The Sheriff appears at the film's opening, sneaking up on Robin Hood and Little John as the two are swimming. Despite his attempts, Robin Hood manages to escape by hiding in a tree.

Later, he is shown traveling though the town for his daily tax collection. He uses several methods to get them. First, he takes them from Otto the blacksmith, by hitting Otto's leg until the coins that the dog hid in his cast come out, which causes obvious pain to Otto's broken leg. At Mother Rabbit's home, he takes the single farthing that was meant as a birthday present for Skippy. The Sheriff even stops so low as to take money from a blind beggar, while being completely oblivious to the fact that the beggar is Robin Hood in disguise.

The Sheriff is one of the participants in Prince John's archery tournament. Once again, he is unaware of the fact that a stork archer is a disguised Robin Hood. He even carries on a conversation with the "stork" about how Robin Hood did not attend, and brags that he could always see through the disguises. Though the sheriff is apparently a decent and respectable archer, making it to the final round, he resorts to cheating to defeat the disguised Robin Hood. First he has one of the two vulture henchmen named Nutsy, hide in the target, and the vulture adjusts the target so that the Sheriff gets a bull's eye. When the "stork" shoots, he nudges the stork's bow, in an attempt to have him miss. He loses anyway, thanks to Robin Hood's skill. After Prince John unmasks Robin Hood and sentences to beheading, the Sheriff becomes suspicious when the prince suddenly orders Robin to be released. He then discovers Little John holding a knife to the back of Prince John's neck and attacks him, freeing the prince and resulting in the following battle against Robin Hood. He tries to fight Lady Kluck, causing her to Judo flip the Sheriff knocking him out.

Despite his supposed loyalty to Prince John, he is not above making fun of him when Prince John is not around, as the Sheriff is next seen singing a mocking song about Prince John that the villagers had made up, while sharing it with Sir Hiss, much to John's fury. Later, he presumably imprisons most of the townspeople on the Prince's orders for not paying the dramatically increased taxes that Prince John imposed as punishment for the mockery, takes money from the poor box in the church which is the last straw for Friar Tuck who attacks him, he then arrests Friar Tuck for high treason. On Prince John's orders, he prepares the gallows to hang the Friar, knowing that Robin Hood would no doubt come to stop the execution and lead to his capture. While he and his two vulture henchmen are working, they are approached by a blind beggar, who is once again Robin Hood in disguise. Trigger gets suspicious when the beggar begins asking too many questions about Friar Tuck's execution, but the Sheriff ignores him, believing that he is harmless.

The Sheriff and his men are then seen guarding the jail, but the Sheriff had fallen asleep on duty. He gets annoyed by Trigger when his crossbow accidentally fires. When he and Trigger hear the sounds of Nutsy being ambushed by Robin Hood and Little John, they investigate, and find what they believe is only Nutsy, but really Robin Hood. The disguised Robin Hood then puts the Sheriff back to sleep with a lullaby and steals his keys and opens the door to the jail, allowing Little John to enter. When Trigger hears the door shut, he accidentally fires his crossbow again, waking the Sheriff up, who fails to see Little John getting in and then reprimands Trigger for making another false alarm.

Falling back asleep, he is awoken again when coins from one of the bags that was being pulleyed from the royal treasury to jail cell fell on him. He was then subdued by Little John who stole his clothes to use a disguise to keep Trigger from alerting anyone. The Sheriff is then seen again (in his underwear) chasing Robin Hood when he attempts to escape. The Sheriff corners him in Prince John's chambers and lunges at him with his torch, setting the room on fire. After a brief fight, Robin Hood escapes when the flames cut the Sheriff off from chasing him. It is unknown how he managed to escape the burning room. The Sheriff is finally seen at the end of the film, having been stripped of his position by King Richard, who returned from the crusades, and is sentenced to working in the Royal Rock Pile alongside Prince John and Sir Hiss, where all three villains were heard from no more.

Like many others characters created by Disney, the Sheriff of Nottingham appears as a guest character in this series. Some of the episodes that the Sheriff appears in include "The Stolen Cartoons", "Pete's House of Villains", "Goofy's Valentine Date", and Mickey's Magical Christmas: Snowed in at the House of Mouse.

After the Curse, his StoryBrooke counterpart is named Keith, a frequent visitor to The Rabbit Hole bar. One night, he meets a woman, Lacey (Belle becoming amnesiac because a sort launched by The Evil Queen), who is happily playing pool by herself. He assumes she and Mr. Gold (Rumplestiltskin) are no longer together, so he attempts to flirt with her, but is quickly turned down.

Later that night, Lacey goes out on a date at the diner with Mr. Gold. She excuses herself to the bathroom to fix her dress, but actually goes out to the alley to meet up with Keith. They make out, and Mr. Gold eventually finds them. He angrily pushes Keith off of her thinking she was being forced upon, but discovers it was planned. Keith approaches Mr. Gold to apologize stating he did not know they were still a couple, which Mr. Gold bitterly affirms. Mr. Gold has had enough, and using magic, he rips out Keith's tongue and hits him with his cane. Lacey is attracted to Mr. Gold's dark side and watches with a mischievous look on her face as he continues to give Keith a continuous brutal beating.

Even though Once Upon a Time was derived directly from Disney films (i.e. Gaston being in this, despite not originating from the original fairytale), the Sheriff was portrayed as a human in this series instead of an anthropomorphic wolf.

The Sheriff makes occasional appearances in the Disney Parks as a meetable character.

39 years later in September 13, 2013, the Sheriff was joined with other Disney Villains for the "Unleash the Villains" Halloween event hosted by Hades from Hercules, at Disney's Hollywood Studios. 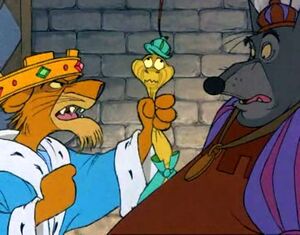 The Sheriff of Nottingham along with Sir Hiss and Prince John. 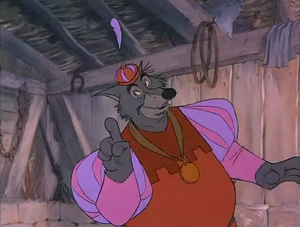 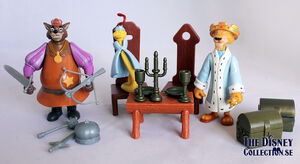 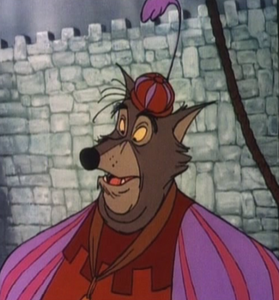 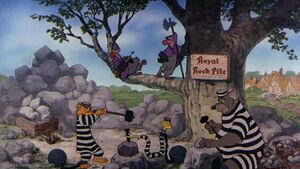 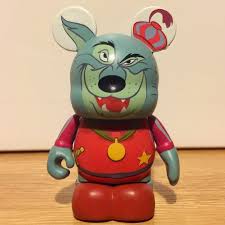 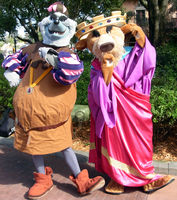 Sheriff in Disney Parks
Add a photo to this gallery