Trying to conquer the heart of Lyon Vastia.

Proveing to be superior to Lucy Heartfilia.

Avenge the death of her parents and find her true love (formerly; failed).

Tragic Witch
Sherry Blendy is a former Mage of the Lamia Scale Guild and a former member of Team Lyon. She serves as one of the supporting antagonists in the Galuna Island arc. She is currently married to Ren Akatsuki.

She is voiced by Yuka Iguchi in the Japanese version of the anime, and Trina Nishimura in the English version.

Sherry is first introduced with her hair tied in pigtails, her choker tied into a ribbon, a purple and pink short spaghetti dress with light pink trimmings, black leggings, and high-heeled sandals. Her dress appears to have two long and thin wings at the back. As a part of the alliance against Oración Seis, however, Sherry dons a slightly different appearance. Her hair became loose, with her bangs falling freely over her head, and she wears a pink dress with black trimmings.

Sherry is a very dramatic individual who will always make overdramatic statements about how everything is for "love". She feels a deeply romantic attachment to Lyon Vastia, and has a relationship with him. She also feels a passionate dislike for Lucy, because she was believing that Lucy was her "love rival", but she cries when she was thinking that Lucy died. During the time-skip, she was extremely loving and affectionate towards Ren Akatsuki, and is now in a relationship with him.

Very little is known about Sherry's past except that her family was a victim to the Demon Deliora, and that sometime later, she joined Lamia Scale and started working as a Mage there.

By the time she was around 13–14 years old, she and her friends heard of Lyon's quest to unfreeze Deliora and kill the Demon. Seeing his power, she and her friends (who also lost their families to the Demon) thought Lyon could in fact kill the beast. It was for this reason she joined up with Lyon on his quest to defeat the Demon along with Yuka Suzuki and Toby. They went to the Northern Continent and found the sealed Demon and moved it to Galuna Island, where she and Lyon's followers began using Moon Drip to unfreeze it.

For three years, she faithfully followed Lyon's will in melting Deliora to the point where she fell in love with him. How he feels about her devoted affection is unknown, but it appears to mirror Gray Fullbuster's reaction to Juvia Lockser's affections for him: nonchalantly. 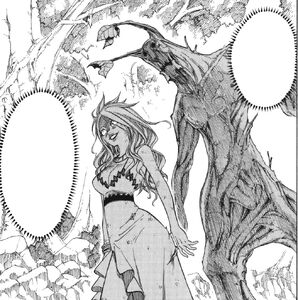 Sherry giving life to a guardian made of lianas. 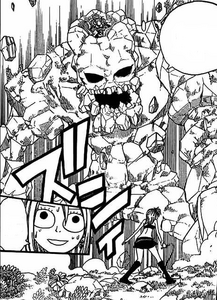 Sherry gettingready to wipe out Lucy.