Villains Wiki
Register
Don't have an account?
Sign In
Advertisement
in: Spoilers, One Piece Villains, Organizations,
and 21 more

Seven Warlords of the Sea (English)

Unknown, speculated to have been established at least 22 years ago from the present One Piece timeline

Obey the World Governement (all failed).

Pirate Warlords
The Shichibukai, also known as the Seven Warlords of the Sea in English, was a major antagonistic faction in One Piece. They were the 7 (though this number fluctuates throughout the series) powerful and notorious pirates who had once allied themselves with the World Government. Though most of them are antagonists, Boa Hancock becomes an ally of Monkey D. Luffy after falling in love with him, and Jinbe who later on joined the Straw Hat Pirates.

The Shichibukai was an organization of seven pirates turned privateers in the service of the World Government. Although they once work for the World Government, the Shichibukai themselves do not care about or respect the Government (excluding Bartholomew Kuma, who was modified into their puppet) or even other Shichibukai, and were often considered by the Marines to be no different from any other pirate. On the other hand, they were once known as "government dogs" and were despised by other pirates, but are still feared and respected for their infamous reputation and strength before, and even after they become Shichibukai.

After the latest Levely's closure, the Shichibukai was officially abolished by World Government when the Levely obliged Fujitora's proposal thanks to Kings Riku and Cobra (who were suffered by Doflamingo and Crocodile, respectively). And afterwards, all of its former members at large faced their attempting arrest by the Marines meaning they are enemies to the World Government once again. It is said that they will be replaced by Vegapunk's newest invention called the "SSG".

Duties of the Shichibukai

They do not offer open opposition to the authority of the World Government, but are not obligated to follow its orders either. They are only allowed to attack other pirates and must also compensate the Government with a tenth of their plunder though this regulation is not usually followed at the very least. Each member of the Shichibukai must also have strong intimidation skills and a fearsome representation to put off others becoming a pirate and make them fear them.In addition, given the discussion between Bartholomew Kuma and the Gorosei, it can be assumed that once someone becomes a member of the Shichibukai they must be undefeated to maintain their position, or at least are not allowed to have a widely known debacle or scandal that affects their reputation.

Some of the members do various tasks for the government, such as conquering new islands for the World Government (described as "liberating") and guarding nations, but their ultimate purpose is to keep other pirates in check. Most importantly, the Shichibukai serve to help maintain the balance between The Three Great Powers. Theoretically, the Shichibukai are allies of the government, and in times of war would collaborate with the Marines. Still, many Marine officers (for example Vice Admiral Smoker, Admiral Kizaru, Admiral Fujitora, Fleet Admiral Sakazuki and former Fleet Admiral Sengoku) despise them and consider the Shichibukai as nothing more than pirates when they don't trust pirates.

Several high-ranking Marines expressed surprise that even two of the Shichibukai actually bothered to show up when summoned for the meeting about Crocodile's removal, and they were very shocked when a third arrived. Tellingly, of the others besides Kuma that showed up, Doflamingo came out of sheer boredom (passing the time before the meeting by nearly forcing two marines to duel each other), and Mihawk came only to hear about the pirates being discussed in the meeting. When they are not under orders of the World Government, they have no commitment to assist the efforts of the Marines.

Most of the Shichibukai appear to show general apathy towards the World Government and in some cases even hostility. During the battle with the Whitebeard Pirates, Moriah stated he does not care who wins and Boa Hancock openly attacked both Marines and pirates.

In exchange for these services, the Shichibukai are pardoned for their former actions and any existing bounties are rescinded.As the Shichibukai are no longer outlaws, they can make money through legitimate business, as well as bounty hunting. Some, however, are content to simply float around the sea on their ships. The government does not seem to mind, and the Shichibukai are granted a great deal of autonomy in how they operate, at least thus far. Other benefits include access to resources normally out of bounds to normal citizens and pirates, such as the use of Kairoseki equipment. Boa Hancock, in particular, has a treaty that acts as a restraining order for all ships that come near Amazon Lily. Jinbe and his entire crew were given a pardon for their captain, Fisher Tiger's attack against the World Nobles, and their status as slaves nullified. Donquixote Doflamingo also managed to operate the Human Auctioning House with the government fully ignoring it before passing it to Disco. Crocodile abused the privilege of being no longer monitored so closely to build himself a large and powerful covert organization,while Blackbeard and Trafalgar Law exploited the benefits their statuses granted them in order to enter facilities that would otherwise have been unreachable to a pirate. The privilege of protection and pardon extends to any of the Shichibukai's subordinates, as Jinbe was able to have Arlong released from Impel Down and the rest of the Sun Pirates to return to Fishman Island freely, while Caesar Clown, guilty of destroying Punk Hazard via illegal chemical experiments, was given a full pardon simply for working directly under Donquixote Doflamingo. Prior to joining the Straw Hat Pirates, Nico Robin sought to be Crocodile's partner mainly for protection. Had Law admitted the Straw Hat Pirates were his subordinates instead of allies, the highly wanted crew would have been spared as well.

Even if they violate the law, the World Government and Marines may choose not to take any notice. Doflamingo used to own the Human Auctioning House before giving it to Disco. Crocodile seemed to have gone unsupervised for an extremely long period of time, as he had created a large, malevolent organization that the World Government seemed to be completely unaware of, while Moriah was abducting civilians and Marines alike to create an army of zombies without the Government raising any complaints. Because of the risk involved with maintaining the Three Great Powers, the Government tolerates the illegal activities of any Shichibukai and attempts to protect them if possible (or at least maintain their fame). That is not to say they would not dismiss a Shichibukai for such actions. There are several Shichibukai who have been dismissed from their positions for several reasons. Crocodile's actions in Alabasta left the World Government with few options other than his dismissal, although in fact Luffy dealt with him (and his bounty was raised for that) Moriah's defeat was met with horror by the World Government as they had only just replaced Crocodile's loss. Fearing what would happen if another fell, the World Government attempted to cover up his defeat by killing all of the survivors of Thriller Bark before word got out.

Even though Kuma (the one sent to deal with the problem) chose to disregard the order of the Gorosei, Moriah was able to retain his status for a time, later answering the call to arms against the Whitebeard Pirates. However, after the war, the government finally deemed Moriah to be too weak to continue as a Shichibukai and decided to annul his pact and eliminate him, under the pretense of Moriah dying in the war to preserve the Shichibukai's reputation of strength. Jinbe forfeited his position as a Shichibukai for his refusal to assist in the war against the Whitebeard Pirates and was incarcerated in Level 6 of Impel Down. After Monkey D. Luffy helped him escape, he assisted the young pirate in breaking free from Impel Down and traveling to Marineford and cooperated with Whitebeard's faction during the battle choosing to abdicate his position permanently and again became a willing enemy of both the Marines and the World Government. Blackbeard only wanted to be a Shichibukai so as to be able to reach Impel Down in order to release several Level 6 prisoners and create a stronger crew. As soon as he achieved this goal, he was no longer interested and resigned from his Shichibukai title. Dismissal from the Shichibukai holds not only the individual's loss of title but in cases also the breakdown of possible politics affiliated to the Shichibukai. As Boa Hancock was warned, while she obeyed the World Government, her nation's treaty with the World Government would be respected. However, if she did not heed the call of the World Government, then the treaty with her home island of Amazon Lily would be made void.

Smoker has implied that Hancock and her people will suffer repercussions for helping Luffy during the war, however throughout the war events related to her were often analyzed incorrectly by the Marines and others, thus her status as a Shichibukai seems to not have been brought into question. Doflamingo has committed numerous illegal activities such as the Human Auctioning House for the slave trade, but having disowned it did not seem to affect him. He also stated he would quit the Shichibukai should they bore him with menial assignments. He also placed a deep-cover agent in the Marines, Vergo, and has the rogue Marine scientist Caesar Clown to produce weapons for him in the underworld in the New World. These felonies would easily revoke his status, but he has managed to keep this from being discovered. However, after Law blackmailed Doflamingo into forcing him to renounce his title to retrieve Caesar lest he faces Kaido's wrath, Doflamingo was left with no choice but to resign his Shichibukai status. This provoked international uproar (though it was later revealed to be a deception). By designating Caesar as his underling instead of associate, Doflamingo was able to maintain his position while releasing Caesar from his status as a wanted criminal. Doflamingo's ability to make the world falsely believe that he resigned is a privilege beyond any Shichibukai, and both Law and Issho suggested it was something that only a World Noble can accomplish. When Law's alliance with the Straw Hat Pirates was in the news, his seat as a Shichibukai fell into jeopardy. Upon Law confirming to Fujitora that it was an alliance and that the crew were not his subordinates, his status as a Shichibukai was revoked.

Following the closure of Levely, the Shichibukai has been completely abolished after most of the royalties affiliated to World Government supported Fujitora's proposal to disband it with the helps of both Kings Riku and Cobra due to their suffering at the hands of both Doflamingo and Crocodile. The remaining five members were dismissed from their connections with the World Government, with all associating privileges and authority annulled, bounty reinstated, and immediate arrest were upon them.

Following of their dissolution, they were replaced by Dr. Vegapunk's newest invention known as Special Science Group or SSG for short.

Members before the Whitebeard War 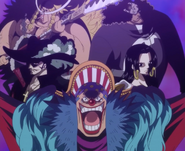 Members after the Dressrosa Arc