The Ape
The Chimpanzee
"Mouthpiece" of Aslan

The Chronicles of Narnia

Taking over Narnia.
Killing the Narnians.

Enslave Narnia (succeeded; briefly).
Gain wealth, power and riches.
Divide Narnia.
Convince the Narnians to give up what they have.
Allow Calormene to enter into and conquer Narnia.
Become human and convince others that he is human.
Get Narnians to stop believing, worshiping, and following Aslan.
Overthrow Aslan.
Make the Narnians they have angered Aslan and brought his wrathful upon themselves and need forgiveness from his fake Aslan.
Have others worship and praise him.
Convince Narnians that Aslan and the evil god Tash are the same beings (all failed).

Shift is the final antagonist of The Chronicles of Narnia book series, serving as the main antagonist of the 1956 novel The Last Battle. He is a talking Narnian ape.

Shift lived at Cauldron Pool along with Puzzle, a simpleminded talking donkey. Although the two call each other friends, Shift tends to treat Puzzle more like a servant than a friend, constantly manipulating the donkey into doing everything for him. One day, he spots a lion skin floating in the Pool and demands for Puzzle to retrive and wear it. He then uses Puzzle as a pretend Aslan and tells the Narnians that Aslan returned, so that Shift could then subtly rule Narnia through the disguised Puzzle.

Eventually, he even teamed up with the Carlomenes and their commander Rishda the Tarkaan and later also had help from a cat named Ginger. During this time, he stated that the Calormene god Tash and Aslan were the same, dubbing them Tashlan. He then hands Narnia over to the Calormenes and arranges for the Calormenes to be allowed to cut down several of the talking trees in Narnia (Killing the tree spirits that inhabit them), and reveals that he intends to have most if not all of the Narnians sold into slavery to the Calormenes.

His deceit eventually gets a majority of the Narnians killed at Stable Hill in a battle against Tirian, Jill, Eustace and some other loyal Narnians. He met his demise when he was thrown into the Stable by King Tirian and was devoured by the Calormene god Tash. Narnia is soon destroyed by the true Aslan and Puzzle and other Narnians including the Pevensies (minus Susan, who is no longer a friend of Narnia) enter Aslan's Country (also called New Narnia).

His name Shift describes most of his personality, as he is a shifty, tricky, deceitful, and cunning ape. Shift is able to talk and convince almost anyone into believing his actions and words aside from his ability to manipulate others he also uses fear to make people follow him. Despite his extremely greedy and selfish nature Shift was excellent at getting others to believe him and trust him.

Despite seeing him kill the other inhabitants of Narnia and enslaving those who followed Shift still believed. While most of his followers believed him they were afraid of what would happen if they turned against him. Shift increasingly becomes more human in his manners, actions, and behavior eventually behaving less and less like an animal and an ape. When Shift gained power he wanted others to think of him as human and call him a human rather than an ape.

As Shift's power and control grew he no longer desired to be an ape and wanted to be human he put on human clothes and decided to walk and move more like a human. If anyone tried telling him that he was really an ape or that he looked like an ape Shift tried to convince others that he was a human who looked like an ape. Shift is described as a clever con artist an example of how clever Shift is he uses guilt methods on others. While Shift is good at making others feel guilt-ridden he also makes other Narnians he is also good at making others feel powerless to do anything.

Shift rises to power and gains his wealth from the Calormenes who aid him and give Shift support. Aside from gaining support and help from the Calormenes Shift gains his wealth by convincing the Narnians to give everything they have and everything they own to him and the Calormenes. Shift also divided the citizens of Narnia turning them against each other the talking animals and other Narnians followed Shift, the Calormenes, and his fake Aslan. Shift's actions caused the dwarves to stop believing Aslan which lead them to look out for only themselves they refused to follow Shift and his Calormenes and refused to follow Tirian who was trying to save Narnia.

Shift's manipulation cases the Narnians praise, pray and beg him, the Calormenes, and his fake Aslan for forgiveness for their wrong actions that have angered Aslan. Aside from fearing the wrath of Shift and his Aslan the Narnians willing agree to allow themselves to be enslaved and allow Shift to use lies and steal from them. Shift's determination to convince others that he is a human instead of an ape or animal shows that he is trying to be something he is not and denies what he really is. 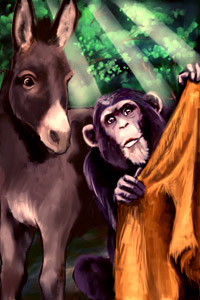 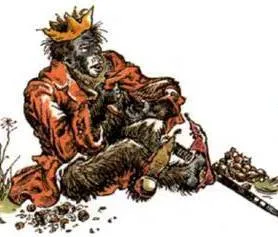