Assault any humans it comes across.

Monster
The Shika Inves is an Advanced Inves and antagonist in Kamen Rider Gaim.

A Shika Inves was summoned by Kouta Kazuraba to compete in an Inves Game against Team Baron. Due to the Shika Inves beats down Baron's three Inves  until Peko knocked the Lockseed out of Kouta's hand, causing the Shika Inves break out and start rampaging.

The Shika Inves later finds the Ichigo Lockseed and eats it, causing it to turn into the Evolved Shika Inves. The Shika Inves beats back Gaim until Kaito gives Gaim the Pine Lockseed, allowing Gaim to transform into Gaim Pine Arms and defeat it with his Iron Breaker finisher.

Another Shika Inves evolved from a Elementary Inves after it consumed a Donguri Lockseed thrown down by Zangetsu to fight Kouta. It was defeated by Gaim with the Musou Saber.

A Shika Inves was later summoned by Kamen Rider Bravo along with several Elementary Inves. It was destroyed by Gaim's Suika Arms Odama Mode.

A Shika Inves later appeared along with a Kamikiri Inves and a Komori Inves to attack Gaim as he was fighting three Elementary Inves. It was destroyed by Gaim's DaidaimaruNagimata Mode. 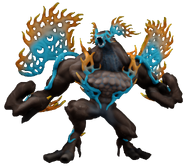