Killing people he deems as "trash".

Become a tyrant and make Akira his personal secretary/highest position in military, vowing to stay with him forever.

Shiki (シキ) is one of the main characters of Togainu no Chi. He is the strongest man in Igura. Because he often appears in front of Igura participants and slays them immediately and with no warning, he is extremely feared. Though he kills Igura participants frequently, he neither carries nor collects tags, and thus does not appear to be an Igura participant. He is a violent and brute man shrouded in mystery. The first Il Re who has never been defeated. Shiki formed the Igura in order to battle against Line-compatibles, so he could kill Nano and quell his memories of the first time they met.

He is voiced by Hikaru Midorikawa.

Shiki appears in the first episode of the Togainu no Chi anime. He is then seen at the very end of that episode slaying a group of Igra participants who were going to kill Akira. After the Igra participants were slain, Shiki points his katana to Akira but does not kill him, amused by the fact the Akira doesn't beg for his life. He holds his katana to Akira's throat, commenting on his arrogant eyes, then walks away.

Later he is encountered again while Akira and his group were resting in a neutral zone, appearing just down the street having slain several people, causing an uproar for it being so close to the nuetral zone. This causes Rin to immediately give chase, with Akira following close behind, concerned for his friend. When Akira loses sight of Rin, he encounters Skiki in a dark alleyway and a battle ensues. Shiki, clearly being the stronger of the two, easily overwhelms Akira and sends him flying through a glass window of an abandoned building, where he grabbes the nearly unconscious Akira and begins suffocating him against a wall. In what could possibly be a slight interest in his victim, Skiki states in a fairly mocking voice that he will let Akira go if he simply begs for his life; relating to the previous time he beat Akira where he refused to beg for his life. Instead, Akira finds his chance to free himself by kicking Shiki in the stomach, although Akira collapses to the floor right after. Shiki then decides to leave the battered Akira for the time being.

Then we see Shiki placing a suitcase filled with a new type of Line in front of Arbitro, head of Vischio, who talks about business matters between the two of them. Shiki comments on his disgust for Arbitro's "pet", Kau, and his hobby for torturing young men, then leaves.

A few episodes later Shiki again meets up with Akira and what seems like another battle - though it was actually a threat of a battle - ensues over a suitcase (which the viewer can suspect is filled with "Line") Akira was standing near after Nicole Premier asks him to give to Shiki. Upon an exchange of a few words and a short clash or swords, Shiki takes the suitcase and walks off into the night letting Akira live yet again.

Shiki is next seen when Rin, alone on a motorway, yells his name. They clash for a short period of time, and it is then shown that Rin and he are related, but having different mothers. Rin lands near a broken edge of the motorway, and he falls down, with Shiki disappearing.

After this, he is revealed as the Il Re when Rin presents a 'full house' of tags to Arbitro, who then accepts the challenge on Shiki's behalf. Shiki mocks Rin as they fight, causing the other to fall into desperation as he tries to kill him. However, just as he is about to kill Rin, Akira appears, saving Rin from his death. Bombs are dropped on the 'Palace', and Shiki is seen in what seems like a state of shock. Akira and Rin then escape, leaving him and four others behind to fend for themselves. It is unclear how they - Shiki, Arbitro, Kau, Gunji and Kiriwar -escaped.

Near the end of the series - episode 11 - he is seen battling against Nicole Premier, and is seen to be almost humiliated in his inability to hit him. Arbitro, Kau, Gunji and Kiriwar are seen to be watching this battle. However, Nicole seems to mock Shiki, then he lures Shiki into drinking his blood, which is 100% pure Line. Shiki cuts Nicole open with his own mouth, and he takes some of his blood, causing himself to undergo what seems to be massive pain or an epileptic fit, as the Line affects his body. Nicole is seen to leave apathetically, leaving the four watchers to comment on Shiki's apparent 'death'. However, the Line hadn't killed him like Nicole and the observers said it would, as he gets up a few moments later, covered in blood, which is apparently Nicole's.

We later see him confront Akira and Keisuke as they try to get to the church at the start of the "civil war", quoting Nicole's words "Those who cannot win keep challenging me, despite the fact that they will be defeated. You've tasted nothing so far, but I can sense your fear." This alludes to the fact that Shiki may think he is at the same level as Nicole. He asks Akira to go with him. When Akira's refusal is clear as he tries to run away, Shiki kicks him to the floor. He tells Akira to not defy him, at which Keisuke tries to attack Shiki. Shiki slashes him across his torso and Keisuke's blood flies everywhere.

Nicole appears on a roof and throws two shards of glass at Shiki to stop him making an advances on Akira who is now at Keisuke's side. Shiki tells Nicole that he has surpassed him, but Nicole pointed out his mistake of taking Nicole's blood to overcome the fear inside him. Shiki leaps to the roof and corrects Nicole, saying he has surpassed himself and Nicole. Shiki again tries to attack Nicole, but is still unable to harm Nicole in any way.

However, a while later, on the same roof, Shiki manages to land a hit after using incredibly speed to get behind Nicole and send him flying off the roof. He follows and lands an earth-shattering blow that Nicole evades. Blood pours from Nicole's left arm so it seems Shiki managed to cut him. He tells Nicole that he wont be able to escape him, and goes to attack him again. Nicole catches Shiki's blade with his hand and the shockwave resulting affects the roads around them. Nicole tries to use his hand to pierce Shiki, however, Shiki stops his hand before he can, reminding Nicole of the futility of trying to beat him. Blood is spilt, however it is unclear where it came from or who's it is.

Shiki reappears beside Akira, letting the viewer assume that he has defeated Nicole, and reprimands Akira for grieving. Akira attacks Shiki for killing Keisuke, and they clash for a little while. Shiki knocks Akira's knife out of his hand and before he delivers another blow, Rin interfers. Akira pushes him out the way and still tries to attack Shiki after he mocked Akira. Rin again intervenes but Shiki grabs his throat. He throws Rin to the ground and stabs his leg. Akira runs to attack Shiki, wherein Shiki raises his katana to strike Akira, but is again stopped by, surprisingly, Nicole, who is glowing blue. He slashes Shiki across his torso diagonally. Yet Shiki pushes both Nicole and Akira to the ground. He encourages them, and reiterates Nicole's words from the previous fight "Accept this blood and show me how you'll overcome this trial!" This confirms the definite switch between Shiki and Nicole's situations. After those words, an explosion occurs, leaving Akira, Nicole and Rin's eye wide. Whether they were killed in the explosion or not is unconfirmed at this point, yet we see that Nicole rescues them.

Shiki reappears, seemingly far away from the scene, clinging to his wound. A gunshot is fired and he realizes he is surrounded by the soldiers that attacked Toshima. Calling them trash, he leaps to attack. We again see Shiki leaving the scene, where he had killed all the soldiers and left them in a blood bath.

The last we see of Shiki is when Akira confonts him at the very end of the final episode. He's surrounded by the new Line that Arbitro introduced a while ago, showing that the power he gained from Nicole clearly wasn't enough. He clashes with Akira for the last time, allowing the viewer to make their own decision about what happens next.

In the game, Shiki appears as a mysterious figure who slays many without taking tags. He regards Akira as a "small fry" at first, but becomes interested in Akira's attitude towards him. He is interested in how Akira glares at him even in the face of death.

Shiki arrives shortly after Keisuke's death, and begins fighting with Akira, and threatens to rape him in front of Keisuke's corpse. He then forces Akira to come to his apartment, where he tortures Akira physically and mentally for several days (including giving him a belly piercing, forcing Akira to mastrubate, throwing him into scalding water, beating him, and raping him repeatedly). At one point Shiki kills Rin, having returned smelling like blood and throwing Rin's stilettos onto the floor.

Akira develops severe Stockholm Syndrome during his captivity, and does not leave even when Shiki leaves the door unlocked and Akira unbound.

After Nano drags Akira out the room and they are met with Emma and Gwen, Shiki comes to Akira's aid. In the midst, Shiki notices Nano and is extremely furious. Nano was his life-long enemy; Shiki's purpose in life had centered on killing Nano. 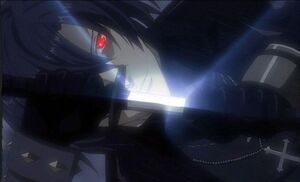 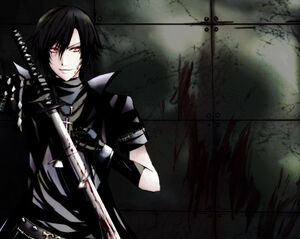 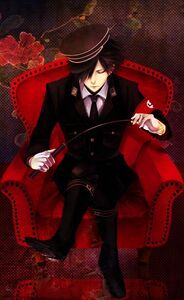 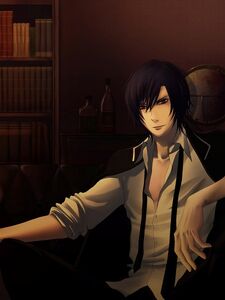 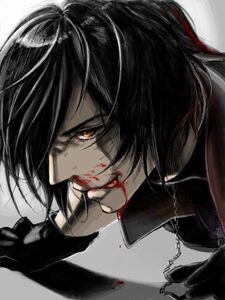 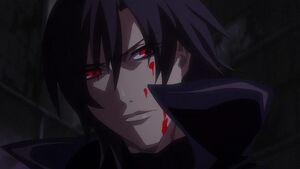 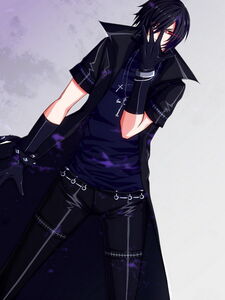 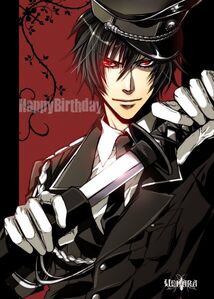 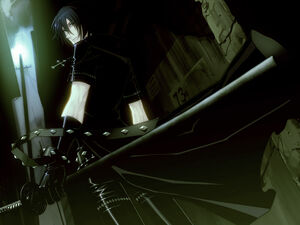 Add a photo to this gallery
Retrieved from "https://villains.fandom.com/wiki/Shiki_(Togainu_no_Chi)?oldid=3419619"
Community content is available under CC-BY-SA unless otherwise noted.