Villains Wiki
Register
Don't have an account?
Sign In
Advertisement
in: One Piece Villains, Pirates, Anime Villains,
and 40 more

Captain of the Golden Pirates

Swordsmanship
Telekinesis (via the Fuwa Fuwa no Mi)

Escape from Impel Down (succeeded).

Declare war upon the world as an act of revenge (failed in Strong World only).

Shiki the Golden Lion is the captain of the Golden Lion Pirates and the main antagonist of the 10th One Piece film One Piece Film: Strong World. He is known for being the first known prisoner to break out of Impel Down, a massive underwater prison known for being inescapable. He is also the main protagonist of One Pieces special chapter, Chapter 0, also known as Strong World. He was also a member of the infamous and vicious pirate crew called the Rocks Pirates about 40 years ago.

Very little is known of Shiki's past, aside from the fact that he was a member of the legendary Rocks Pirates, along with future Yonko Whitebeard, Kaido, and Big Mom. 33 years ago, after the Rocks Pirates disbanded, Shiki formed his own crew, the Golden Lion Pirates. Shiki later became a notorious pirate during the age of Gol D. Roger (called Gold Roger by most people) who wreaked havoc across the seas.

25 years before the main events, Shiki found out that Roger had found a very powerful weapon, and he wanted to combine their powers to rule the world. Roger refused, saying that there would be no point in being a pirate if he couldn't do as he pleased, and an epic battle known as Ed War commenced, with Shiki being backed up by his massive crew of 51 divisions. However, due to unexpected stormy weather, the Shiki pirates suffered heavy loses and Shiki ended up with part of a ship's steering wheel stuck in his head.

When Roger was arrested, Shiki attacked Marine Headquarters at Marineford, refusing to believe those wimpy Marines could have captured and arrested a man as powerful as Roger, and demanded that Roger show himself so that he could kill Roger himself. Then Marine Admiral Sengoku approached him, Sengoku telling him that he will never get the chance to fight Roger again, and that he will be executed in his hometown, Loguetown, located in the East Blue. Shiki is greatly upset by this, saying that the East Blue is the weakest of the seas, and that having Roger be executed there would be an insult to a man of his caliber. Marine Vice Admiral Monkey D. Garp then appears and tells him that the East Blue is a symbol of peace, while Sengoku tells him that he will not interfere with the execution. Shiki then engages Sengoku and Garp in an unseen battle, in which half of Marineford is destroyed, Shiki loses, and is imprisoned in Impel Down.

Shiki became the first person in history to escape Impel Down, by cutting off his shackled feet and flying away using his Devil Fruit abilities. He used his twin swords, Outou and Kogarashi, as his new prosthetic limbs. He then approached Edward Newgate, more commonly known as Whitebeard, and offers to join forces with him to rule the world, but Whitebeard brushes off his request. Shiki lets Whitebeard in on his plan to show the new rookie pirates real fear of pirates. He then falls unconscious into the sea alongside her henchmen Sarlet the gorilla and Indigo after being defeated by Luffy's attack that destroyed the entire island, leaving him an unknown fate.

One of Shiki's main powers is his Devil Fruit power: the power of the Fuwa Fuwa no Mi (Float-Float Fruit), which gives him the ability to levitate non-living objects and himself. He can lift many heavy objects, including ships, and is even able to shape various thing (such as debris or Earth) into different shapes, mostly lions heads. The only weakness of this fruit (aside for the normal weaknesses of Devil Fruit, e.i. not being able to swim) is that he cannot levitate living creatures such as people.

Outside of his fruit power, Shiki has a massive crew, which was the biggest pirate crew of all during Roger's time. He also has a huge tolerance for pain, as shown with the steering will being stuck in his head and being able to cut of his own feet.

Shiki also has two swords, called Outou and Kogarashi. Before his imprisonment, they were used like regular sword, but after he escaped, he used them to replace his missing feet. He is capable of attacking from a distance with them, sending slashes from his swords across the air. 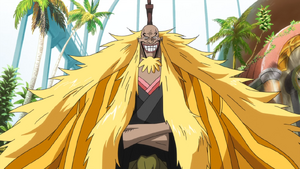 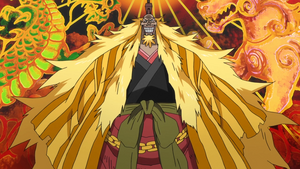