Member of the Guild of Merchants

Chaotic Ambasador
Baron Shilard Fitz-Oesterlen is an antagonist in The Witcher franchise, appearing in the novels Baptism of Fire, and The Lady of the Lake, and the secondary antagonist of the videogame The Witcher 2: Assassins of Kings. Shilard is a member of the Nilfgaardian aristocracy and ambassador, and would latter become a member of the Guild of Merchants. He was known for his sophisticated use of language which was considered comprehensible only to other diplomats and scholars.

He was voiced by Robbie Stevens.

Geralt meets him first, when he is talking to King Foltest, in the Camp of Foltest's army during the Prologue.

Geralt meets him again in Act 2 in Henselt's military camp. The witcher learns the ambasador kindapped Triss trapped in a statue form and sailed to Loc Muine. There he orders Nilfgaardian sorceress Assire var Anahid to release Triss from the statue form and orders to kill Assire for conspiracy against emperor Emhyr var Emreis. Later he tortures Triss to learn more about Lodge of Sorceresses.

In Act 3, if Geralt chooses to rescue Triss from the Nilfgaardians, he takes Shilard hostage. When they come before a company of soldiers, their leader trains a crossbow on Shilard, revealing that he was ordered by the capital to execute him and kills Shilard.

If Geralt does not rescue Triss, Shilard uses Letho to frame the Lodge of Sorceresses for the regicides. 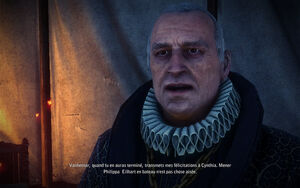