Head Jailer in Impel Down (formerly)

Killing people in Impel Down (formerly).

Join Blackbeard
Kill Absalom and take his fruit (all succeeded).

Shiliew (in Japanese: シリュウ, Shiryū), also known as Shiliew of the Rain, is an antagonist in One Piece. He was a chief jailer at Impel Down. He was locked up in Level 6 for his crimes against the prisoners. He was on death row but was released by Magellan to take care of the Blackbeard Pirates who broke in. He ended up being recruited into the pirate crew by their captain, Blackbeard. After the time-skip, Shiliew became the captain of Blackbeard's second fleet.

He was voiced by Takayuki Sugō in the Japanese version of the anime, and Matt Thurston in the FUNimation English dubbed version.

Shiliew is a ruthless, malicious and sadistic man who reveled in killing prisoners at Impel Down. He is not concerned by the brutality of his actions and cares little for the prisoners lives claiming them to be trash. Shiliew is also shown to be treacherous as he went back on his agreements with Magellan when he agreed to take down the Blackbeard Pirates when released from his prison cell and instead used that opportunity to kill his former prison guards and escaped from Impel Down. Even as a member of the Blackbeard Pirates, Shiliew did not mind the opportunity of leaving the crew if Blackbeard could not obtain Whitebeard's power showing that he did not truly respect his captain and his crew and was willing to betray them if they did not meet his expectations. However, after Blackbeard succeeded in taking the powers of Whitebeard, he remarked on how he made the right decision by joining up with them.

He is also cautious and attentive of impending threats, as seen by how he scolded the Blackbeard Pirates for underestimating Magellan and their carelessness of the dangers in the New World. However, he did join the crew in mocking the defeated Bonney Pirates.

Shiliew was stated to be as powerful as the former head jailer Magellan. Because of his strength, Shiliew was entrusted to guard the prisoners in Impel Down and maintained the prison's reputation as a place where no prisoner can escape from. Ivankov vouched for his strength, stating if he was still on duty, Luffy and Mr. 2's breakout would not have been possible. To gauge how strong he is, Shiliew was placed in Level 6 with the most powerful and dangerous prisoners in the world. Like other members of the Blackbeard Pirates, Shiliew have an impressive stamina and can recover quickly from point blank attacks from Whitebeard, powerful pirate in his own right, and Sengoku, a powerful fleet admiral. In addition, Shiliew was also able to survive in his battle against Magellan, the latter of whom that can easily incapacitate anyone with his poison ability.

He is incredibly stealthy, sneaking past the monitors of Impel Down without being seen. He also killed a guard without the latter even knowing he was present. This increased with the invisibility of his new devil fruit, as he delivered a powerful slash to Gekko Moriah with him not aware of his presence.

Shiliew is a great swordsman, as he was able to cut down many of his targets with just one swipe of his sword. His swordsmanship abilities was strong enough to also inflict damage on Whitebeard during the Marineford War. However, it is unknown how powerful he is at using a sword in battle.

Shiliew has obtained the powers of the Clear-clear fruit and has gained the ability of invisibility.

In the past, Shiliew was once the Head Jailer of Impel Down and was an equal to Magellan but he constantly abused his rank as he would use it to ruthlessly murder many prisoners for his own entertainment. Because of the volume of his offense, Shiliew lost his position as Head Jailer and he was confronted by Magellan who placed him under arrest. They fought and Shiliew was defeated before he was locked up in level six of Impel Down to be executed for his actions.

Shiliew was first seen in the sixth level of Impel Down where he remarked to guards of where the escapees were going before remarking on how things were going since he was gone. Shiliew told them to tell them to pass on a message to the warden to free him for help. He was released by the prison guards and was entrusted by Magellan to take care of the Blackbeard Pirates and the tension in the prison. However, Magellan refused to lift his execution only postponing it before he hung up. Shiliew got his sword back from the prison guards who he immediately cut them down, sarcastically apologizing as he left the area. Afterwards, he confronted the Blackbeard Pirates who seemed like they were preparing for a fight. It is unknown what occurred in their meeting but the Blackbeard Pirates got passed him and he was shown unharmed as he destroyed communications to the outside world.

When the Blackbeard Pirates were poisoned by Magellan, Shiliew approached them and gave them a cure to the poison, stating without him they would have died. Blackbeard had previously offered Shiliew a chance to join his crew and repeated his offer, as the other crew members smile in agreement. Shiliew then accepted the offer in order to avoid being imprisoned again and he had been waiting to meet someone like Blackbeard. With that, Shiliew became a member of the Blackbeard Pirates. With him on their side, the crew traveled to level six in order to get new members to join the crew. Blackbeard then had the inmates all fight each other to the death, to find only the strongest ones. As a result, Blackbeard got four prisoners to join his crew. Blackbeard and the rest of his crew then headed out for Marineford.

After Ace's death, Shiliew along with the other Blackbeard Pirates were spotted and he was identified by the marines who were shocked at his new allegiance. Shiliew told an angry Sengoku to find out for himself as to what became of Magellan.

He took part in attacking Whitebeard, slashing him with his sword. After Whitebeard's death, Shiliew and the rest of the Blackbeard Pirates placed a black tarp on Whitebeard and their captain. As they waited on Blackbeard, Shiliew jokingly wondered if the crew would disband if Teach failed. When Blackbeard emerged and revealed that he stolen Whitebeard's devil fruit ability, becoming the first person to use two devil fruits, Shiliew remarked that he made a good decision to join the crew.

As Blackbeard continued to spread chaos on the battlefield until Shanks and his crew arrived to end the war. Blackbeard stated that his crew was not ready for fighting Shanks yet and he left the area with his crew.

The Blackbeard pirates were seen on a burning island in the New World resting from their battle at Marineford and having captured the Bonney pirates. They mocked the defeated crew for not being strong enough to hold their own against them. The crew were hoping to get to get a ship from the Marines to better go into New World but they realized that the deal was cut off when they saw Akainu on board a ship coming towards the island. They managed to escape from the island without getting caught and left Jewelry Bonney and her crew to be arrested.

A year after the crew killed Whitebeard, they fought the remnants of the Whitebeard Pirates led by Marco and defeated them with ease. With nobody else in their way, they used their captain's knowledge of Whitebeard's crew's former territories and took them over. Because of this Blackbeard became a Yonko and the Blackbeard Pirates began collecting powerful devil fruits to enhance their fighting abilities. The crew's number increased as well into ten squads, Shiliew soon became the captain of Blackbeard's second fleet two years after the Battle of Marineford.

Shiliew appears briefly with the other members of the Blackbeard Pirates as Blackbeard comments on the news about Monkey D. Luffy.

When Absalom ventured to an island ruled by Blackbeard, members of the Blackbeard Pirates kills Absalom for his clear-clear fruit ability. Shiliew consumes the fruit and now has its power. After Gekko Moriah invaded, Shiliew use his power to go invisible to kill many zombies that Moriah used to attack the people on the island and attacks Moriah, taunting him with his new powers. 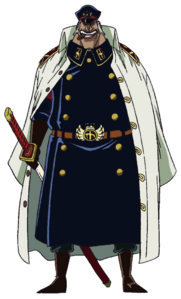 Shiryu's concept art from the anime.