Naruto Gaiden: The Seventh Hokage and the Scarlet Spring

Experimenting in his laboratory.

Get vengeance on Sasuke for killing Itachi (failed).

Shin Uchiha is the main antagonist of Naruto Gaiden: The Seventh Hokage and the Scarlet Spring. He has a grudge against Sasuke Uchiha for killing Itachi Uchiha. He desires to recreate the Akatsuki with his clones by the same name, Shin Uchiha. He is a student and test subject of the legendary Sannin, Orochimaru.

Shin Uchiha is a spiteful and ignominious individual who strongly dislikes Sasuke Uchiha for his involvement in Itachi's death. He feels that Sasuke is disgraceful to the Uchiha clan. However, it was revealed by Orochimaru that Shin was a non-Uchiha who was obsessed with Itachi. Shin has a desire to recreate the Akatsuki as well to carry out his goals. After fighting Naruto and Sasuke, he states that the idea of peace is absurd since it halts the evolution of mankind. Shin seems to care little for his clone's safety as seen when he used one of them (who was with him) as a shield to block Sasuke's fireball technique. In fact, Shin only views his clones not as his sons but as tools to help replace damaged organs. In his conversation with Sakura, he told her that it is natural for mankind to wage war and that it is normal towards the evolution of humanity.

Shin is a capable fighter who was able to fight and even overwhelm Naruto Uzumaki, the Seventh Hokage, and Sasuke a powerful shinobi of high caliber. Shin is also extremely knowledgeable on medical ninjutsu, biology, and science like his teacher Orochimaru.

With his implanted Sharingan eyes over his body, Shin enhanced his vision and is able to have a better view of the area that he is in while in battle. With the Sharingan, Shin can read the movements of his opponents and can possibly copy their techniques. With his Mangekyo Sharingan, Shin can teleport objects and individuals across space-time similar to Kakashi Hatake and Obito Uchiha's Kamui technique.

Shin can also manipulate objects around him to create a weapon like how he can have an arm full of blades that he can use to attack his opponents. In battle, Shin is resilient to pain such as how he was able to grab Sasuke's sword without wincing. He is also very strategic and perspicacious, as he can even use his clones as shield to guard himself against a powerful attack.

Shin was once one of Orochimaru's test subjects where he was tested upon because of his special genetic makeup. He used to work alongside the Sannin but at some point Shin became obsessed with the Uchiha Clan and began to imitate them. He later took the clones from Orochimaru and left his organization so that he can recreate the Akatsuki.

Shin Uchiha first appeared in a hideout outside where he told his son that he thinks Sasuke is a disgrace to the Uchiha clan. He also comments on wanting to revive the Akatsuki organization. When a spying creature saw that Sarada Uchiha was going to look for her father with her friend Chōchō, Shin decided to send his son to kidnap her. His efforts to kidnap her was thwarted as the Seventh Hokage, Naruto came to protect them. He later appears with his son Shin telling him that it is now time for them to go on the offensive.

He teleported to the area where Naruto and Sarada were at and immediately began to attack. He was immediately intercepted by Sasuke and the two began to fight. Shin ultimately had the upperhand in this fight and was about to kill Sasuke but he was knocked back by a powerful punch from Sakura. He was too injured to put up a fight and was about to get captured by Naruto and Sasuke to be interrogated along with his son. However, one of his spying creatures teleported them to safety with Sakura as a captive. He has Sakura perform surgery on him since he had taken a massive blow from her. Sakura has some concern for his son's safety but Shin said why would she care so much for his own son.

After the surgery was done, Shin fought Sakura. In his battle against her, Sasuke showed up in Susano and cut off one of his arms. He was about to escape with his space-time jutsu to get a new organ from a clone but he was stabbed by his clones. Shin asks his clones why they betrayed him and their response was that they did not need a father any longer. As the battle between Team 7 and the Shin clone army raged on, Shin attempts to escape again with his space-time jutsu this time by taking Sarada and Chōchō as hostages. However, Sarada killed the creature that tried to capture her and her friend. Shin was disappointed and sat back to see Sarada fight his clones. He then succumbed to the fatal injuries that his clones inflicted upon him. 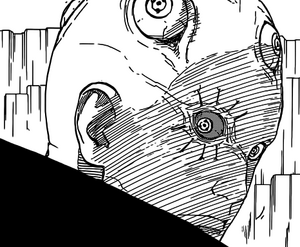 Shin in the manga. 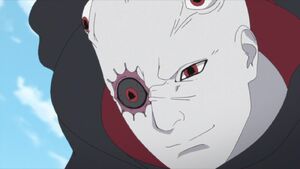 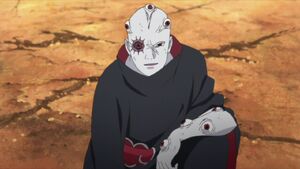 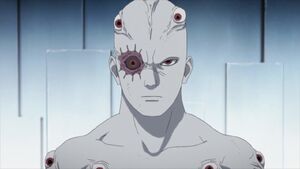 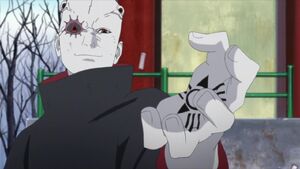 Shin about to activate his jutsu. 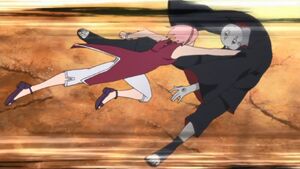 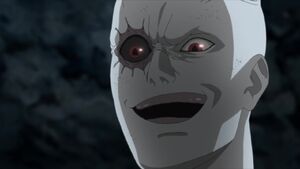 Shin's smiling sadistically after killing one of his clones to injure Sasuke. 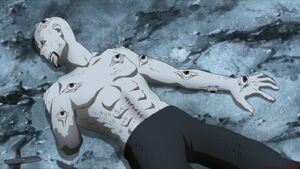 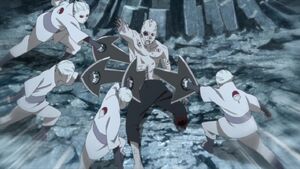 Shin betrayed and fatally wounded by his clones. 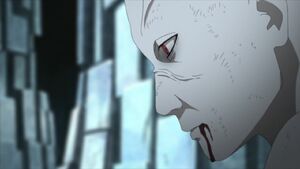