Become CEO of the Yashida Corporation.

Kill his daughter Mariko for being chosen by his father as his heir.
Kill Wolverine (all failed).

Shingen Yashida is a major antagonist in the 2013 superhero film The Wolverine, the sixth installment of the X-Men film series.

He is the son of Yashida Corporation CEO Ichirō Yashida and the father of Mariko Yashida. Following his father's passing, Shingen decides to kill his daughter to prevent her from inheriting the corporation, which his father willed to her for unknown reasons.

He was portrayed by Hiroyuki Sanada, who played Kenji in Rush Hour 3 and Akihiko in Avengers: Endgame.

He is the son of Ichirō Yashida and the apparent heir to his business empire. However it is later revealed that Ichirō intended to pass it down to his granddaughter Mariko instead. Enraged by this "insult", Shingen attempts to have his own daughter murdered so he can seize control of the company.

However Mariko comes under the protection of Wolverine (who Shingen despises for being both a Gaijin and a mutant). It later turns out that Shingen hated mutants due to the fact that his father was fascninated by mutants after being saved by Wolverine, as he thinks of his father's fascination of mutants as a disgrace to their family's name.

Shingen is later attacked and mutilated by Viper. Donning the Silver Samurai armor, he attempts to kill Wolverine and Yukio, only to be ultimately killed by Wolverine during the battle as Shingen realizes his healing power, knowing too late that he is no match against Logan. 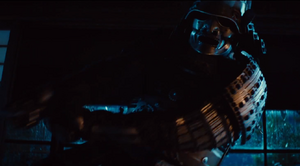 Shingen wearing the armor of the Silver Samurai