Dr. Isaka
Weather Dopant
The Man With The W Memory

Experiment with many memories on his body.

Shinkuro Isaka, or Weather Dopant, is the main antagonist of the middle arc of Kamen Rider W and a major antagonist in the show. He is Ryu Terui's archenemy and is responsible for the death of many, including Ryu's family.

He was portrayed by the late Tomoyuki Dan.

Isaka then came across a woman named Shroud who was Ryubee's scarred wife, Fumine. She gave Isaka the Weather gaia memory, not knowing what a monster he would become. He then wanted even more power as he would test multiple gaia memories on himself killing many in the process. He tested his abilities on many people using freezing, drowning, and electric murders. One of Isaka's victims was Ryu Terui's family. He froze Ryu Terui's family on an August night and then Shroud used Ryu's anger to her own agenda and gave Ryu a sword and the Accel gaia memory. She told Ryu that someday he could kill Isaka with his hatred and anger.

Isaka become a doctor to Dopants and made ties with the Museum. He became obsessed over Saeko Sonozaki and her body. He sees that if Saeko is powerful enough, she can beat her father, Ryubee. He then uses Saeko to get closer to Ryubee. Saeko would start to frequently meet with Isaka. Saeko asked Isaka to make her sister, Wakana better. Isaka then experiments on Wakana's body and mind. Isaka says that the driver that the family uses doesn't give the full power of the memory. He then saves the Puppeteer Dopant and asks him to control Wakana's body. Puppeteer Dopant agrees and uses Wakana as a puppet.

Isaka later gave the Invisible gaia memory to a magician girl named Lily Shirogane. Lily wanted to control her invisibility so she asked Shotaro or W's left half, Philip or W's right half, and Ryu to find Isaka. This was Ryu's first encounter with Isaka. Ryu charged at Isaka and proceeded to fight him. Isaka defeats the two riders after Shotaro nearly dies from doing a double memory maximum. It is then revealed that Isaka's intentions is for Lily to slowly die from the memory. The memory will be powered up by her, since she is compatible to the memory. He would then pick up the memory and infuse to himself, like what he did with the hundreds of other memories he's used. He then appears at Lily's magic show. He then proceeds to battle Ryu. Amid the battle Lily starts to die. Ryu goes to save her because only the Accel gaia memory has the power to save her and take the gaia memory out of her. Isaka watches this happen. Ryu then kills Lily with his sword. The Invisible memory comes out and then with Accel's electricity Ryu restarts Lily's heart. Isaka in shock starts to run. Philip comes and turns into Fang. The two riders are met with electricity from Isaka. Then the riders proceed to do a Twin Rider Maximum. They defeat Isaka for the first time.

Isaka comes back almost dead and tells Saeko not to underestimate these Kamen Riders. As the Philip and Shotaro face Nightmare Dopant in Shotaro's dream, Isaka comes and sees Akiko with Philip and Shotaro sleeping. He then attacks them with lightning. He then seemingly kills Philip. A bird gaia memory named Xtreme saves Philip. Isaka then shows up to collect a bear for Beast Dopant. At first Philip and Shotaro turn into Fang. As before Shtaro cannot keep up with Philip's power and Isaka quickly beats them. He then fights Kamen Rider Accel. Philip then gives Ryu his Cyclone gaia memory. Isaka is overpowered by the memory and leaves but, in the process he loses the bear. Isaka then continues to plot with Saeko to kill her father. As Yesterday Dopant or Yukie Sudo wants to torture Saeko by making her repeat her yesterday because Saeko killed her older brother, Kirihiko Sudo or Nasca Dopant, Isaka says that that won't work on such a powerful memory such as Taboo (Saeko's gaia memory). Isaka then makes Yukie repeat her yesterday. As the riders find Yukie they are approached by Isaka who tells them what happened. They then fight and beat Isaka and save Yukie. Yukie thanks them and then loses her memory due to side effects of the Yesterday gaia memory.

Isaka starts his final plan. He kills a girl's father by striking him with a bolt of lightning. She is a perfect match for the Quetzalcoatlus gaia memory. Her name is Nagi Shimamoto. Isaka wants Nagi to have fear consume her heart so that he can put the Quetzalcoatlus gaia memory in her and then kill her and tae the memory for himself. With this memory he could fly and potentially kill Ryubee Sonozaki. He then tells Saeko to get ready to defeat her father. Ryu gives Nagi a special lucky charm that Ryu's dead sister, Haruko gave to him at the same zoo. Isaka sees Nagi with Ryu and Shotaro. He comes down to the street and occupies W with a tornado and Accel with a cloud that would constantly shoot lightning. Isaka then takes Nagi's hand and looks at how much her connector has grown and tells her that the more fear consumes her heart the more the connector grows. Ryu tries to approach Isaka but then falls to the ground. Isaka taunts him by saying that he can't take revenge or protect anyone. Isaka then leaves.

Isaka, tells Saeko in their bedroom, that he made a vow ten years ago. He says that he was a man that did not know why he lived and he strived to know the answer. One night changed him, the night where he saw Ryubee Sonozaki using the Terror gaia memory to terrorize some people on the street. He then tells Saeko that he then came to Ryubee and begged him to give him a gaia memory. Ryubee told him that if he was worthy he would one day encounter gaia memories. That day he made a vow that the terror memory would someday be in his hands. Saeko says if that was the reason Isaka became close to her. Isaka replies with a yes and Saeko says that she feels more comfortable knowing Isaka's true intentions. Saeko tells him that he is surely going to have the Terror gaia memory.

Isaka then walks up on Nagi and Shotaro talking with each other. He askes Nagi if she slept well and Shotaro says to stop screwing with her. He then says that this will go fast as he throws a replica of the Quetzalcoatlus gaia memory into a Macaw in the zoo. It turns into the Quetzalcoatlus Dopant and flies away with Nagi Shimamoto once it picks her up. As Philip and Shotaro turn into Kamen Rider W CycloneJoker Xtreme and defeat the Quetzalcoatlus Dopant, Isaka takes Nagi Shimamoto and looks at her connector. He is surprised to see that the connector is not complete. He says that even after all the fear he's made her endure, her connector still isn't complete. As W approaches Isaka he turns into Weather Dopant and shoots many bolts of lightning at him. Isaka then tells Ryubee that he will defeat him with Saeko in the Sonozaki Mansion. Ryubee turns into Terror Dopant and quickly overpowers Isaka and Saeko. They then flee with Ryubee calling Saeko a foolish daughter. 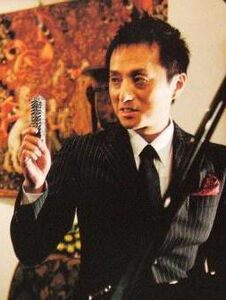 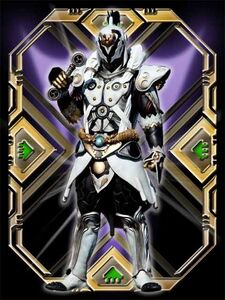