One of the Elder Gods (formerly)

Shinnok is the overarching antagonist of Mortal Kombat: Annihilation. He is the Elder God of Wind who wishes for power not only over all realms, but over the gods as well. He is also the father of Shao Kahn and Raiden.

He was portrayed by Reiner Schöne.

During the before the events of Annihilation, Shinnok had his two sons battle to the death and stated that whichever of his sons killed the other in battle would be his heir. Raiden beat Kahn but refused to kill him, so Shinnok saw him as being weak and made Kahn the next in line. Some time after, Kahn began helping his father use Mortal Kombat to conquer other realms to add them to the domains they ruled over. They recruited inhabitants from the realms who would gladly sell out their worlds for power. These recruits would host Mortal Kombat, a fighting tournament. If the Outworld side won enough tournaments, a portal would open, allowing Kahn and his army to breach the realm and merge the realms together, killing all the inhabitants, so that he and his father could rule over the barren realm. Prior to the events of the films, they had already conquered at least one realm and wiped out its entire populace.

After Outworld loses Mortal Kombat, Kahn turns to his father, Shinnok to break the ancient codes of the tournament and allow him to invade Earth. Shinnok revives Kitana's mother and Kahn's former queen Sindel on Earth, allowing Kahn to enter the realm to claim her.

Shinnok makes his first physical appearance when he appears in Shao Kahn's lair where Kahn tells Shinnok that the merging has begun. Kahn tells Shinnok that Raiden is of no concern, Shinnok then becomes furious and then angrily exclaims that Kahn let him live and tells him that he doesn't tolerate excuses. Shinnok then tells Kahn that control over Earthrealm will make them more powerful and tells him to not underestimate the power of the human spirit. While Kahn is abusing his minions, he repeats the same lines Shinnok said to him when expressing disappointment.

Shinnok is then seen talking to Kahn again, telling Kahn that if he fails him, he will take his soul. Shao Kahn is then seen giving a speech to his army as Shinnok watches.

Raiden then appears to Shinnok and Shao Kahn, Shinnok tells Raiden that there is less then one hour before the merging of the realms. Raiden tells Shinnok that he alone has the power to end this, Shinnok tells that he doesn't remember him this weak, and Raiden tells him it is not weak to value life. Shinnok then gives him one last chance to rule the realms with his family. Raiden rejects the offer, Shinnok then tells him he will die with the rest of his race and tells Kahn to kill him. Kahn then fires a blast that kills Raiden. When Kahn fails to defeat Liu Kang, Shinnok tells Kahn "Must I do everything for you?" and then calls upon the Elder God of Fire and the Elder Goddess of Water and watches as Liu Kang and Shao Kahn fight for the fate of the universe. When Shao Kahn is defeated at the hands of Liu Kang, Shinnok is imprisoned by his fellow Elder Gods and Raiden was offered his position in their ranks. 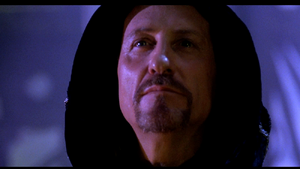 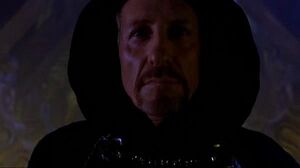 You let him LIVE? 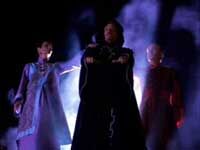 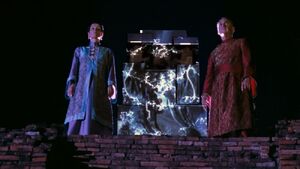