Villains Wiki
Register
Don't have an account?
Sign In
Advertisement
in: Corporations, Corrupt Officials, Doctors and Scientists,
and 24 more

Shinra is a powerful corporation that rules the entirety of Gaia. They have a complete monopoly over the Mako Energy, which is used as a power resource by the entire planet. The company acts as the government and military, having a word at anything and everything that happens in the planet. They keep people in-line by providing people with the basic necessities, such as food and electricity, and have their own well-trained military force to fight off any resistance to their rule. The company is very well organized, having a president and a board of directors, each of them responsible for a department of the company. The corporation itself obtained control of much of the world's information and broadcasting services, and created a propaganda news service called "Shinra News". The main purpose of this propaganda machine was to declare those considered disloyal to Shinra dead and to considerably distort events to Shinra's favor. Though, in protest to Shinra's lies, an anti-Shinra news service called "Shinra Truths" appeared. Both of these can be viewed as E-mails in Crisis Core.

Shinra is the founder of the company, acting as the President. Being the President, he has complete control over the company, and all directors answer directly to him. He is a very important person and is the boss of Midgar City. He is the richest man on the planet thanks to his successful harnessing of Mako energy, from Shinra Inc's Mako reactors. He was planning on finding more Mako energy in the Promised Land, but unfortunately this didn't work out in the end for President Shinra. Unfortunately Shinra Inc's most powerful Soldier Sephiroth assassinated poor President Shinra, when he impaled him in his executive office, on the the very top floor of the Shinra Building. The Shinra Company would never be the same again, after the sudden loss of the most dearest and beloved President that Shinra Inc. ever had in its entire history. He is the one ultimately responsible for giving the loyal citizens of Midgar City a better and more comfortable life, thanks to the services that Shinra Inc provides and his "bread and circuses" model for running the city. The planet and certainly Midgar City will be forever indebted to the pioneer and legend that is President Shinra Inc.

Rufus was the son of Shinra, acting as the Vice-President of the company. After Shinra is murdered by Sephiroth, Rufus assumes control of the company.

Heidegger was the highest officer of the company, responsible for the Department of Public Relations and Safety Maintenance. He had control over the military force of the company and the elite SOLDIER squad.

He was voiced by John DiMaggio in the remade version of FFVII.

Hojo was a scientist, responsible for the Department of Science and Research. He was in charge of the Mako Research and the JENOVA Project, used to create the perfect SOLDIER's by injecting them with Jenova cells and Mako Energy.

Reeves was responsible for the Department of Urban Development, which was in charge of administrating and maintaining all cities. Secretly, Reeves was the one controlling the Cait Sith robot to keep an eye on AVALANCHE.

The incompetent Palmer was responsible for the Department of Space Exploration. The department was created to explore space, but it failed miserably. However, it was not abolished, since it could still have some use.

The Department of General Affairs, better known as The Turks, was a division of elite agents of Shinra, responsible for carrying covert operations for the company, such as espionage and assassinations, also serving as escorts and bodyguards for Shinra's executives. The Turks reported directly to Heidegger. The group was composed by Tseng, who acted as their leader, as well as Reno, Rude and Elena. 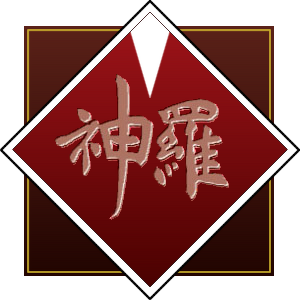 A company logo of Shinra Inc. 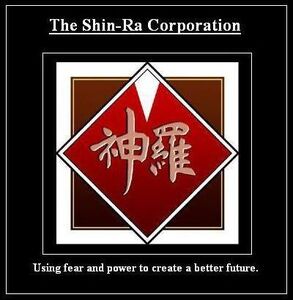 A logo of Shinra Inc. 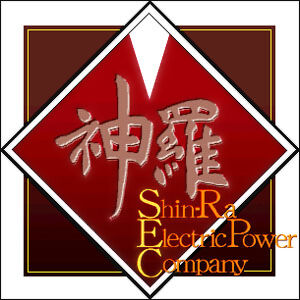