Monster
Shiomaneking is a fiddler crab Shocker kaijin and an antagonist in Kamen Rider.

After the defeat of Mosquiras in the Kumano region, Shiomaneking was put in charge of Shocker's operations there and sent to defeat the Riders.

Shiomaneking kidnapped Professor Sakai for Ambassador Hell, who sought to use Sakai's knowledge as an oceanic researcher to construct an underwater city to assert Shocker's domain over the oceanic resources of the region. When Sakai refused to work for Shocker, Shiomaneking went to kidnap his wife and child to use their lives to force him into cooperating. As Shiomaneking goes to kidnap the family, Takeshi Hongo/Kamen Rider 1 and Kazuya Taki arrived to stop the operation and forced Shiomaneking to flee. Later though, Shiomaneking manages to kidnap Sakai's family and Taki. As they are fleeing in a boat however, Kamen Rider 1 sights them and pursues them across the sea.

Hongo went to confront Shiomaneking and Ambassador Hell while Hayato Ichimonji rescued their hostages. Ichimonji soon joined the battle and transformed into Kamen Rider 2 to assist Rider 1 in fighting Shiomaneking. Shiomaneking manages to catch Rider 2 in its pincer claw, but Rider 2 is saved by Rider 1. Rider 1 and Rider 2 then perform their Rider Reversal and Rider Double Kick, heavily wounding Shiomaneking. Though Shiomaneking survives, the attack causes its flammable spit goes out of control and causes its body to erupt into a large fireball.

Shiomaneking was part of the Revived Shocker Kaijin summoned to assist Quoit Stag Beetle. When Kamen Rider V3 attacked a Destron base, Shiomaneking sacrificed himself to capture the Rider.

Several Shiomanekings were part of the Dai-Shocker army assembled in the World of Decade. In the final battle, the Shiomanekings fought against the gathering of 25 Kamen Riders formed to oppose Dai-Shocker's invasion of the multiverse.

When the heroes went to 1971 retrieve a Cell Medal before Shocker could obtain it, Shiomaneking appears to claim the medal, soon being joined by Poison Lizard Man. Rider 1 and Rider 2 then appear to confront the kaijin, with Rider 2 destroying Shiomaneking with a Rider Kick.

However, in the altered timeline caused by the Core Medal being left in the past, where Shocker defeated the Double Riders and conquered the world with their kaijin Shocker Greeed, Shiomaeking was one of the many monsters who served Shocker's global regime.

Shiomaneking later returned as one of the monsters serving Shocker in the future. When Shocker attempted to execute Kamen Rider OOO, Shiomaneking was slashed by Eiji and beat up by a crowd of civilians.

Shiomaneking was one of the undead kaijin revived as members of the Badan Empire, who sought to raise the underworld to conquer Earth. He participated in the Badan Empire's initial incursion to the surface and later reappeared to take part in the final battle against the Kamen Riders. He was shot by Right of the ToQgers and was not seen afterwards.

Shiomaneking was a member of the Shocker remnants that emerged in 2016 and attempted to execute a scheme to revive Ambassador Hell. He confronted Yamato Kazakiri/Zyuoh Eagle, Sela/Zyuoh Shark, and Leo/Zyuoh Lion, and commented that the three would make good templates for Shocker to create cyborgs from after the latter two managed to track him with their Zyuman senses. The Zyuohgers initially assume Shiomaneking to be of the Deathgaliens, but Shiomaneking reveals he is actually a kaijin of Shocker. Shiomaneking then attacks the Zyuohgers, but their fight is interrupted by Takeru Tenkuji, who was also after Shiomaneking.Takeru transforms into Kamen Rider Ghost to fight Shiomaneking and is soon joined by the three Zyuohgers in fighting the Pincer Crab kaijin.

Meanwhile, the Deathgalien take notice of Shiomaneking's presence, with Ginis commenting that the Shocker kaijin is an interesting addition to the Blood Game. After being ebaten back by the Zyuohgers, Shiomaneking is defeated by the combined finishers of Ghost Grateful Damashii and Zyuoh Eagle. However, Ginis desired for the battle to continue and had Naria feed Shiomaneking a Continue Coin infused with Ginis' cells. Despite Naria being skeptical whether to coin would work on him, the process was successful and Shiomaneking was grown giant. The Zyuohgers then summon Cubes Gorilla, Shark and Lion to form ZyuohWild 6*2*3 to take on Shiomaneking. After being blasted back by ZyuohWild's Wild Cannon, Shiomaneking is destroyed by the Wild Rocket Knuckle attack, declaring that Shocker would rise again as he blows up.

Shiomaneking was part of a team of Shocker forces that attempted to capture Mayu Tachibana. However, they were met with opposition from Shocker's splinter faction Nova Shocker, who also sought to capture Mayu. Shiomaneking fought Buffal as Kamen Rider Ghost and Takeshi Hongo join the battle and rescue Mayu.

Following the battle, Shiomaneking voiced frustration over how half of Shocker's soldiers left it to join Nova Shocker and was reluctant to face Ambassador Hell after he was revived. Shiomaneking later led another force to capture Mayu again, only for her to be defended by the Powered Up Kamen Rider 1, who destroys Shiomaneking with a Rider Kick. 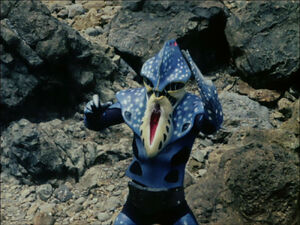 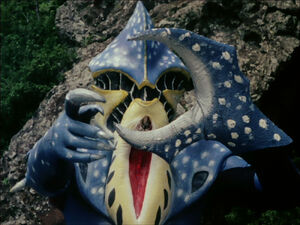 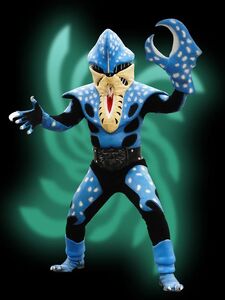