Waitress at the Angel Mort Cafe

Hanging out with friends.
Working at Angel Mort.

Protect Satoshi's sister (failed/succeeded, depending on the world).

Shion Sonozaki is a major character on the Higurashi No Naku Koro Ni series. She is the twin sister of the Sonozaki family's heir, Mion Sonozaki. She is also the love interest of Satoko Houjou's brother, Satoshi Houjou.

She was voiced by Satsuki Yukino in the Japanese version, and Megan Hollingshead in the English dubbed version.

However, they switched at the day the demon tattoo was to be applied. Shion received the tattoo and became "Mion" while Mion became "Shion".

During two of the eight main arcs in the series, she is portrayed as a villain, killing off most of the other characters, excluding Rena and Kuraudo. Shion moved to Hinamizawa after a long time at a boarding school elsewhere in Japan. Here she found her sister, Mion Sonozaki, the only character not to kill anybody in the original arcs, who would have taken her in if her Grandmother wouldn't force her to torture herself for it.

After a while she was rescued from a group of bikers by a boy named Satoshi Houjou, she fell in love with him, even to the point of being the assistant manager for his baseball team to get more time around him.

Her grandmother found out she was there, and that she was in love with one of the members of the "traitorous" Hojo family, she was forced to tear 3 of her nails off with a traditional Japanese torture weapon often referred to in the anime as the Nail Ripper. A while after, Satoshi goes missing. This drives her to a point of almost breaking. What finally broke her mind was Tomitake's death and Mion claiming that it happened because he offended Oyashiro-sama, whereupon she gets convinced that the Three Great Families are behind Satoshi's disappearence and are now after her for breaking into a forbidden ritual tool storage much like Tomitake did.

This caused her to go on a strategic but violent murderous rampage so that she could get revenge on all of the people who were involved in Satoshi's death. She accidentally causes the death of her frail grandmother before she could ask her about Satoshi, then deliberately kills the village chief, Rika, Satoko, Mion, and nearly murders Keiichi. After she kills these people, she busts her head open falling 2 stories below on top of an apartment building's roof. In her last minutes of life, she has a moment of clarity as she no longer feels the effects of the Hinamizawa Syndrome due to her head wound. She uses this time to apologize to Satoko and everyone else about her deeds and thanks them for letting someone like her feel happiness in the past, promising to never commit these sins again. She then commits suicide out of remorse by rolling over and falling off the edge of the roof, all while apologizing for being born and imagining a life where she and Satoko are best friends studying together with the other main characters.

Shion is often shown to be Mion's polar opposite. While Mion is tomboyish, assertive, and bashful, Shion is more feminine, brazen and rebellious. (This is mainly due to their different upbringings) Also, unlike Mion, who becomes serious and strict during family meetings, Shion does not seem to care about family meetings at all, as she reveals she has no interest about the rules of her family and disagrees with their archaic, barbaric nature of dealing with things, as the Sonozakis are a family of yakuza who torture and murder those who offend them like Rina Mamiya in two of the arcs. Although she was taken out of the main house due to an error when she and her sister switched places as young children, she's always has a great relationship with Mion and it's mentioned that they share the same tastes.

In spite of their contradicting personalities, Mion and Shion switch places very often, which can easily cause confusion in Watanagashi-hen and Meakashi-hen. Also, both seem to also differ in the acts of Hinamizawa syndrome.

Whereas Mion is the only character in the original arcs to never succumb to the paranoia or vicious anger that it causes (the 2020 arc Watadamashi-hen shows that Mion did succumb to it to the point that she committed murder), Shion is one of the most memorable victims. She was in love with Satoshi before his disappearance and seems to develop a crush on Keiichi as well, so much so that she can't bring herself to murder him at first and lets him escape, before losing all notion of sanity in the end due to the Hinamizawa syndrome as her mind has turned into a gibbering mess.

Like most Higurashi characters, she has a very contradicting personality when under the effects of Hinamizawa syndrome, in fact, she may have arguably been one of the worse case scenarios in this instance. In her case, she develops rather severe Paranoid Schizophrenia, before full on Psychosis. With this, she is shown to be the one of the series' most vituperative and violent character. One of her most intense moments took place in Meakashi-hen (which shows the events of Watanagashi-hen from Shion's point of view).

In this chapter (which takes place between the 4th and 5th Watanagashi), she falls in love with Satoshi Hojo, a boy with a troubled and dysfunctional home life, and forms a love/hate relationship for Satoshi's abused little sister, Satoko. In this chapter, at one point she is forced to remove 3 of her fingernails using a special torture device due to her family's hatred for the Hojos and is put under the impression that this will free Satoshi from any curse the family places on him.

When Satoshi kills his aunt and later goes missing, Shion believes her family lied to her, however Mion convinces her that her family is innocent regarding that. A year later, after Mion coldly tells her that Tomitake and Takano became victims of the curse for offending Oyashiro-sama, an offense that Shion also partook in for entering the ritual storage shed, she becomes convinced that the Sonozakis are after her life and were responsible for Satoshi's disappearance, because he also was a victim of the curse. This causes her to go on a warpath where she accidentally kills her Grandmother, Oryou Sonozaki, with a taser, as she planned to forcefully interrogate her about Satoshi's whereabouts, she proceeds to beat her corpse with a whip out of frustration for having died too early. She then hangs her grandfather whom she loved dearly but told her that Satoshi deserved to die and that Shion ripping her fingernails out meant nothing for him, imprisons Mion, beats and nearly kills Rika (who escapes death from Shion by stabbing herself in the neck repeatedly) all until she finally victimizes Satoko (whom she blames for bringing Satoshi to death because she's the one who caused his conflicts with his aunt and subsequently his murder and disappearance, something both Satoko and Satoshi himself actually agree with to the point that Satoshi actually wanted to hurt Satoko at one point). It is after she violently kills Satoko, where she realizes too late that she had forgotten her last promise to Satoshi, to look after Satoko should anything happen to him. With this, Shion officially sunk below the Moral Event Horizon and has a mental breakdown where reveals that none of this was for Satoshi's sake, rather, she let the "demon" (Hinamizawa Syndrome) take a hold of her mind for the sake of losing her emotions and forget the pain of losing her loved one, and not only kills her sister but returns to Keiichi to stab him in the stomach (which does not kill him).

Shion then attempts to climb to the 8th floor of the hospital where she is staying, however, she slips and falls two stories below into a roof where she busts her head open which clears her mind of Hinamizawa Syndrome in her last breathing moments. Before dying, Shion sees Satoshi's face in the moonlight and apologizes to him for failing to protect his sister like she had promised him. She apologizes to Satoko and Mion as well as everyone else for what she did and promises to never make that mistake again, then rolls over the edge of the roof and commits suicide, imagining a happy life where she and Satoko are best friends as Shion falls to her death. In the anime, Shion dies after accidentally slipping, whereas in the visual novel, she kills herself.

In later arcs, Shion becomes Satoko's loving older sister and is very protective of her. She also becomes close friends with the other main characters, to the point that she's willing to sacrifice her life so that Mion, Rena and the others can escape from the Yamainu and survive.

As she is Mion's twin sister, Shion looks very similar to Mion. She has green long hair and teal eyes. Shion leaves her hair down and half-ties it with a yellow ribbon to differ herself from her sister. During her free days, Shion wears a white shirt with yellow jewels and a black dress. She also wears white shoes. During her school days, Shion wears a white shirt with a blue-striped tie and buttons on the shirt. She also wears a blue-black dress. While working at Angel Mort, she wears a blue-red scarf with a yellow bell and blue-white-red clothes. She wears blue-white shoes.

Shion's original school uniform is a white shirt with a red tie and a gray coat outside it. The coat has yellow buttons and an album of the school. Shion also wears a blue dress. In Matsuri, Shion's usual outfit is different than the anime. It is a brown-white shirt with a brown-blue skirt.

Shion uses a lot of weapons in the game, the one you see her use the most is a taser that she keeps in her back pocket for self-defense. Among her others are a knife, a whip and a boulder. She also intended to use her family's torture devices like the tool they used to remove Shion's own fingernails (which later became a Ritual Tool Devil known as Nail Ripper in Ayakashisenshi-hen) but in the end, out of these, she only uses the ones that restrain people and nothing else. In Matsuribayashi-hen, Shion wields an AK-47 assault rifle at one point, and is shown to be professionally trained in its use. 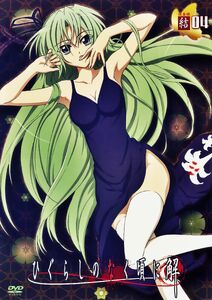 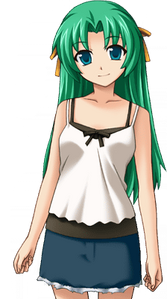 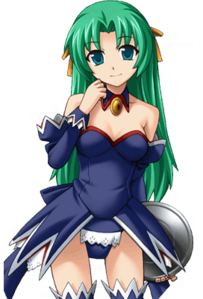 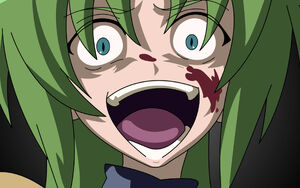 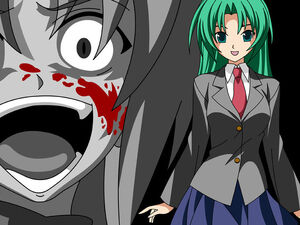 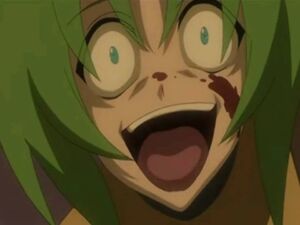 Shion ripping off her nails with the Nail Ripper.

Shion stuns Mion with her taser. 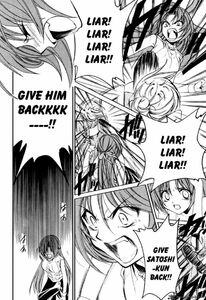 Shion slashing her grandmother Oryou, believing she is a liar for Satoshi's "death". 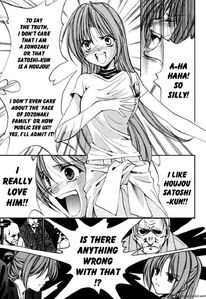 Shion confessing her love with Satoshi to her family.
Add a photo to this gallery

Retrieved from "https://villains.fandom.com/wiki/Shion_Sonozaki?oldid=4205260"
Community content is available under CC-BY-SA unless otherwise noted.