Master of the Red Faction

Envisioning a world where all is cherished

Annihilate the concept of Angra Mainyu: All The World's Evil and bring salvation to all human souls that have ever existed

Creating a world where all is cherished with the Great Grail

He is the Ruler-class Servant of the Einzbern Master‎‎ in the Third Holy Grail War, and the leader of Red Faction. Taking on the name Shirou Kotomine (シロウ・コトミネ, Shirō Kotomine?), he becomes the Master of Assassin of Red in the Great Holy Grail War. He later contracts with Caster of Red, Archer of Red, Lancer of Red, Rider of Red, and Caster of Black.

Shirou also appears as one of the Servants able to be summoned by Ritsuka Fujimaru in the Grand Orders of Fate/Grand Order. There, he appears as a supporting character more often.

A Japanese Christian that led the Shimabara Rebellion, Shirou was born in the Edo period, he was a boy of miracles who could nearly be called a saint. How exactly he was discovered, no one knows.

A good half of his lifetime is wrapped in mystery. He, who concentrated on his studies since childhood, began to perform many miracles at the frontier. Having healed wounds and walked on water, he eventually began to be enthusiastically worshiped as the son of God by the peasants that believed in a prohibited religion.

Sixty years before the story of Fate/Apocrypha ever began, Amasuka Shirou was summoned by an Eizberg Master as her Ruler-Class Servant during the Third Holy Grail War. However, Shirou's Master was killed by Darnic Prestone Yggdmillenia, the master of Fionn/Lancer, who start seizing a foul play by the Einzbern Clan to gain his upper hand. After the war ended with no victor, Shirou stayed beside his Master until her death.

Later on, wishing to create a world to bring salvation upon humanity, Amasuka Shirou changed his name into Shirou Kotomine and started to live on under the disguise of a human priest. Sixty years later, he became the Master of the Assassin of Red/Semiramis as well as the leader of the Red Faction when he participated the Great Holy Grail War.

Shirou also makes an appearance in Fate/Grand Order as a Playable Servant, and he is the same version of Amakusa Shirou from Fate/Apocrypha, this having memories of the Third Grail War and the Great Holy Grail War. However, Shirou served as a much more supportive role in the story. He debuted for the 2016 White Day event and is a major character for Christmas 2016. An alternate timeline version of him appears as an Avenger in Shimosa chapter, being an assistant to Caster Limbo.

In the recent events in Fate/Grand Order, Shirou had more mutual scenes with Semiramis, the Assassin of Red, once she became a limited summonable Servant during 2018 Valentine's Day. First, he made a cameo appearance by the end of 2018 Valentine's Day story, he encountered Semiramis once more. In the 2018 Halloween storyline, Shirou and Semiramis were together in Oniland Amusement Park on spinning cups.

Sieg and Jeanne, both Shirou's former archenemy, showed complicated feelings towards Shirou in Chaldea but showed no oblige in becoming allies with him. Sieg, in particular, showed a nervous frown on his face when he commmented on Shirou's presence. In spite of no longer holding grudge anymore, Sieg still felt complicated about their last battle, and he believed that Shirou felt in the same way.

Shirou's interlude was titled Let Us Tell a Tale of World Salvation. In this interlude, Shirou plays a role combining both a supporting protagonist and an antagonist.

At the beginning of his Interlude, Shirou accompanied Ritsuka Fujimaru and Mash Kyrielight during a mission to prevent even the smallest Singularities from emerging. During their travel, Shirou told his past story in Fate/Apocrypha to Ritsuka and Mash, before they detected a contaminated Holy Grail, with black mud keep oozing out to contaminate Servants. Together, they defeated the remnants of Zouken Matou and his insects. After the defeat of Zouken's remnants, Angra Mainyu surfaced out from the Grail's mud, asking who wants the corrupted Holy Grail.

Seeing the Human Evil surfaced, Shirou turned against the Protagonists because he had a goal to obtain the Holy Grail and annilated Angra Mainyu. Afterwards, Shirou battled against Ritsuka, Mash and Angra Mainyu but eventually was defeated. As Shirou was defeated, the Holy Grail was about to explode, and Shirou insisted that he'll destroy the Grail in order to put an end to this.

As they return to Chaldea, Shirou informed the group that as long as there is a Holy Grail, he will claim it. However, to his surprise, Ritsuka claimed they'll stop Shirou as many times as it took. At this point, Shirou realized that he and Ritsuka cannot come to an understanding. Even so, he eventually gave in and began resoluted to place his own dream under seal, in order to fight alongside with his Master through thick and thin. By the end of Shirou's Interlude, Ritsuka ordered Shirou to clean his room as punishment for his earlier betrayal, and Shirou complied. 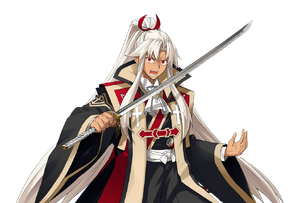 The Avenger-Class version of Shirou Kotomine 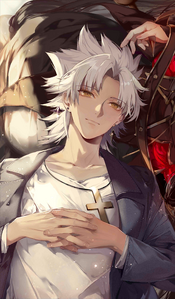 Shirou with Semiramis in his final moment 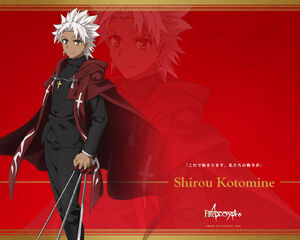 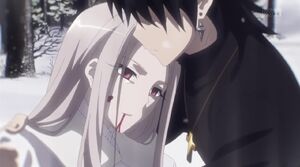 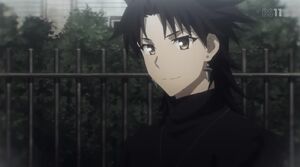 A younger Shirou during the Third Holy Grail War 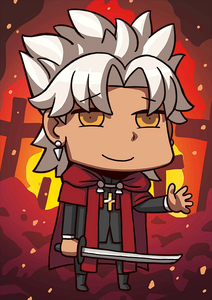 Shiro in April Fools' Day
Add a photo to this gallery

Retrieved from "https://villains.fandom.com/wiki/Shirou_Kotomine?oldid=3370430"
Community content is available under CC-BY-SA unless otherwise noted.