Shiv Katall is known as the galaxy's most ruthless bounty hunter who is often hired by Emperor Zurg to destroy his targets and is a parody of Boba Fett.

He was voiced by Patrick Warburton and Adam Carolla.

Shiv Katall first appears in the episode named after him hired by Zurg to go eliminate Brain Pod number 13. Commander Nebula informed Buzz that he was helping Zurg take over the universe and he immediately went to stop him. Mira, Booster, and XR were offered a vacation since the mission was classified but Mira instead dragged them to get information on Shiv to stop him. They find out what he's planning and that he's confronted them. Shiv Katall takes on Team Lightyear and easily beats them. He then tells the 3 rookies to go home and heads off to kill Brain Pod Number 13. The rookies chase after Shiv's ship and he still tells them to get lost. As they cross into Zurg's space, Zurg's ship blasts Star Cruiser 42 along with Shiv's ship and crashes into the mine. Team Lightyear and Shiv exit their totaled ships. Mira orders Shiv to surrender but instead, he removes his mask and they finally find out why the mission was classified since it turned out to be Buzz Lightyear doing undercover work to spy on Zurg.

Shiv, later on, returns unknowingly and captures Team Lightyear. He promises Zurg that he'll deliver Buzz and the rookies to Planet Z and they agree. It turns out though that Shiv Katall this time was Commander Nebula rescuing them until the cover was terminated. When the Rangers escape Zurg's hornets, Commander Nebula tells them that he was the first Shiv Katall and passed it on to Buzz. But since the cover was blown he would never be seen or heard from again. Booster instead donned the suit and easily gained Zurg's trust to spy on him.

Shiv Katall for some very odd reason appears again pulling heists day after day. Buzz and the rest of Star Command try to find out who it is this time by lowering him into a trap while pulling a heist. Shiv suit also has upgrades for when he last appeared. When they catch him, behind the mask this time is the Evil Buzz Lightyear. He escapes from Star Command and team Lightyear chases after him and later on they head straight for the sun. Buzz and Mira were gravitational suits to stabilize them from falling into the sun. When they confront Bad Buzz they find out why he pulled all the heists. It turned out he was planning to cause massive sunquakes along with his girlfriend Gravitina. 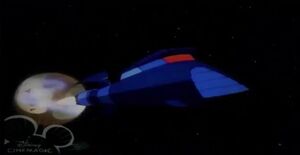