Leader of the New 7 Ninja Swordsmen

Bring back the "Bloody-Mist" era.

Kill Boruto.
Wage war against Konoha (all failed).
Break out of prison (succeeded)

Shizuma Hoshigaki (In Japanese: 干柿屍澄真, Hoshigaki Shizuma) is an antagonist from the series Boruto: Naruto Next Generations. He acts as the main antagonist in the School Trip Arc.

He was voiced by Ryōhei Kimura in Japanese and Xander Mobus in English.

At a certain time, Shizuma was a teacher at the Kirigakure Academy. During a match between Kagura Karatachi and another student, Kagura proceeds to nearly finishing a student off. Shizuma intervenes to take the impact, rescuing the student. While others feared Kagura, viewing him as a psycho, Shizuma secretly was pleased by Kagura's bloodthirsty side, stating that's how he should remain. Since the moment, Shizuma has been looking out for Kagura.

When Hassaku Onomichi gets into a scuffle against Boruto, Shizuma stops the fight and tells him to leave. Before walking off, he praises Boruto for having the courage to go against Hassaku, and tells the him to enjoy their time in the "Village of the Bloody Mist". Later, he reinforces a group of students, which included Hachiya, to attack the students from Konoha, including Boruto. He gave them a last chance after being irritated by their failure. After failing again and they reported that Kagura would be announcing to the Sixth Mizukage, Shizuma felt overjoyed. This all happened by Shizuma attacking Hachiya for his failure.

Shizuma goes up to Kagura and points out his past and how he deserves to owe him. Shizuma falsely claimed that the Fifth and Sixth Mizukage were monsters who killed people who went against their goal for "peace". Shizuma said he was starting a coup and insists on including Kagura. When Boruto denied the accusations, he attacked Shizuma, who knocks him back without hesitation. When being charged at by Boruto's Lightning Release unexpectedly, Shizuma's gang, "The New Seven Ninja Swordsmen" comes to his aid. Boruto goes to attack him again, resulting into his defeat. Ultimately, Kagura accepted Shizuma's deal by agreeing to join him on the condition that they don't slaughter Boruto. Shizuma and his team then goes to collect the other six weapons of the Seven Ninja Swordsmen of the Mist.

He admits that Kagura using Kagura for his plan to test the skills of Seven Mist Swords, acknowledging him as a disgrace of the Yagura's bloodline. Shizuma then uses Bloody Mist Absorption technique through Samehada, giving him an ability to take in his enemies' chakra from their injuries. Mitsuki tags with Boruto and were overmatched against Shizuma's ability to swiftly perform any of his Water Release techniques from any location in the mist, but they were able to somewhat take him down. Samehada goes to absorb Shizuma. Kagura draws the sword, Hiramekarei, against Shizuma. Boruto helps him, each wielding half of Hiramekarei to take him out and release Samehada from Shizuma, defeating him.

He is then seen at the rehabilitation along with his gang members, staring at Kagura.

He appeared in Buntan's flashback where the two made a plan to break out of the cell. As soon as chaos breaks out in the cell while Buntan was eating her meal, Shizuma secretly added poison to her food and abandoned her.

Shizuma is acknowledged for being atrocious in combats and distasteful attitude on duties. Devoted to Kirigakure in his perspective, he believes strongly that the village has lost its dignity because of the peaceful environment in the vullage. Shizuma wishes to revive Kirigakure to the "Bloody Mist" era. He organized a gang of followers to to help him on his ambitions of bringing back the war era. He seems to have dignity for people who will stand up to themselves. He enjoys controlling other people's mind and would use it for his advantage. Shizuma would also murder his subordinates without a second thought if they do not execute their missions.

Shizuma is a combat fanatic. As young as he is, Shizuma was tasked with overlooking student's training, stating that Kiri views him as a capable shinobi.

He is known skillful for kenjutsu. He was able to wield the Samehada, despite to being taken over by it. 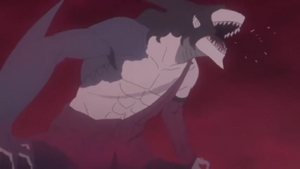 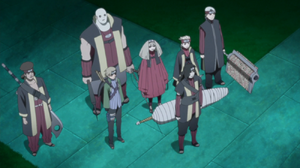 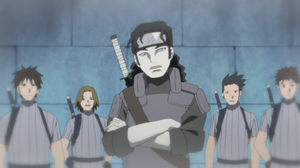 Shizuma's time as the academy teacher.