Complete the Big Machine and use it to rule the world.

Trying to wipe out all the Kamen Riders and Super Sentai.

The Shocker-Zangyack Alliance is a union between Dai-Shocker and Dai-Zangyack formed after the two factions joined forces behind Tsukasa Kadoya and Captain Marvelous's back to wipe out both the Kamen Riders and the Super Sentai and rule the world and the ultimate antagonists of Kamen Rider x Super Sentai: Super Hero Taisen.

The alliance manipulated Tsukasa Kadoya and Captain Marvelous into killing off all of the Kamen Riders and Super Sentai so that there would be no one to challenge them when they took over the world.

After Tsukasa and Marvelous led the remaining Riders and Sentai to destruction, Doktor G and Rider Hunter Silva reveal their alliance and betray their figureheads. However, Marvelous and Tsukasa reveal they already figured out what the two groups were planning and, instead of killing the Riders and Sentai, sent them into a dimensional rift until the Shocker-Zangyack Alliance revealed their true plans, to use their colossal super-weapon the Big Machine, a giant mecha formed from combining the Super Crisis Fortress and the Gigant Horse.

The Kamen Riders and Super Sentai then emerged from the rift and gathered together to face off against the alliance, leading to a climactic battle between the two massive armies. In the course of the battle, the alliance succeeded in bringing about the Big Machine thanks to Kamen Rider Diend, but the colossal mecha was brought down by the combined power of the Go-Busters and Kamen Rider Fourze. 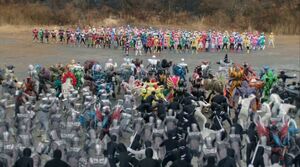