Remodel Humans into Plant and Animal kaijin monsters to build an army and conquer the world.

Kill anyone who knows of their existence outside their own forces and allies.
Use advanced weaponry developed by kidnapped scientists to bring terror and destruction upon those who would dare to oppose them.
Gather all data of the current Kamen Rider events (currently).
Destroy the Kamen Riders and the other heroes within Toei universe.

Shocker is a mysterious terrorist organization appearing as the primary antagonistic faction of the Japanese TV series Kamen Rider. In the universe of Kamen Rider, Shocker is a direct descendant of Nazi and is found by Nazi's remnant members after its collapse of WW2, continuing to carry on the goal of its parent organization.

They are an international secretive terrorist organization seeking to conquer the world with an army of mutant kaijin and unify it under their supreme authority. In Kamen Rider The First, "Shocker" is an acronym for Sacred Hegemony Of Cycle Kindred Evolutionary Realm.

The organization was founded after World War II ended by surviving members of the Nazis who vowed to avenge the deceased Hitler and unify the world under a totalitarian global regime. Together they founded a secret society to realize these goals, which would eventually morph into an international terrorist organization with branches in every country -- Shocker.

Shocker's operatives have been kidnapping millions of innocent humans to use for surgery and experimentation. Most of their human subjects are used to create kaijin via Shocker's scientists giving them animal/plant DNA, turning them into a mutants with superhuman abilities.

Shocker's grunts are called Shocker Combatmen and are genetically modified so that each one is tougher, faster, and stronger than a typical human being.

Eventually, after the loss of several of Shocker's key commanders, the Great Leader of Shocker met with General Black, an executive of a mysterious secret society known as Geldam, to discuss merging the two organizations. After the lower levels of Shocker were eliminated under the direction of the Great Leader, who deemed them unfit for the merger, Shocker and Geldam unified into a new organization known as Gel-Shocker.

After Shocker was originally defeated, it continued to resurface in numerous forms.

Gel-Shocker was formed by the remnants of Shocker merging with another organization called Geldam. After Ambassador Hell's defeat, the Great Leader went forward with his plans to merge Shocker and Geldam, reorganizing Shocker from the ground up and destroying all remaining secret bases. The remaining Shocker Combatmen were massacred and replaced by the stronger Gel-Shocker troopers.

Gel-Shocker was led by the Great Leader of Gel-Shocker and General Black, a Geldam commander originally stationed in Africa.

Destron was formed by the mysterious Great Leader and other surviving members of Gel-Shocker. Though it had branches in every country, it focused most of its attention on Japan. Destron's Mechanical Army at first weren't directly supervised, but after their many failures the High Destron placed Doktor G in charge of the day to day operations of Destron's division in Japanese.

Black Satan was a new organization led by the Great Boss of Black Satan. similar in several aspects to Shocker itself though unlike Shocker, it used Kikkaijin, "Bizarre Machine Men") rather than the inhumanoids used by Shocker and Destron. It also utilized "Satan Bugs" to mind control people around the world, alongside. The organization's downfall came when it was betrayed by General Shadow and destroyed by Kamen Rider Stronger.

Shocker was once again reformed as Neo-Shocker. It was responsible for many terrorist attacks against the Japanese government and mysterious disappearances of people. They sought to eliminate two thirds of the current human population on Earth with them as the dominant majority. Skyrider defeated the organization's Japanese branch commanders and, with the help of the Seven Legendary Riders, defeated its international members as well. The organization later dissolved after the death of their Great Leader.

The Badan Empire was an amalgam of previous groups who had attempted to conquer the Earth and were defeated by the Kamen Riders. It was headed by the Generalissimo of Badan, with Ambassador Darkness serving as a decoy leader. In addition to members relating to Shocker's various incarnations, as well as Geddon and Dogma Kingdom, it also utilized a new powerful "Roid" series of cyborgs.

Dai-Shocker is a conglomeration of all Kamen Rider villain organizations aiming to conquer all dimensions. Their insignia is double-headed version of Shocker's eagle crest with the "DCD" enscribed on it, hinting at Decade's ties to them. They stationed their agents in various alternate worlds in order to achieve total domination over the multiverse and creation itself. After being defeated, it was briefly reformed as Super Shocker, but was defeated again by the Heisei Riders.

Dai-Shocker's most recent return saw them both clash and join forces with Dai-Zangyack, a similar organization comprised villains who fought the Super Sentai.

Space Shocker is an organization comprised of resurrected Kamen Rider villains seeking to conquer the entire universe. The man behind their resurrection was Reider from the Space Crime Syndicate Madou, who used Space Shocker as a distraction while he worked to complete his own plan.

Nova Shocker is a splinter organization that has been planning to overthrow the original Shocker, leading to a civil war between Nova Shocker and Ambassador Hell, the last leader of his Shocker faction. Their primary goal is to kidnap Tobei Tachibana's granddaughter, Mayu, to release Alexander the Great Eyecon from her body.

A collection of Shocker forces resided in the Game World along with other past foes of the Kamen Riders and Super Sentai under the leadership of Shocker Leader III. They were summoned from the Game World after Team Ex-Aid won the Chou Super Hero Taisen tournament and in turn triggered the Chou Shocker Taisen bonus stage, causing Shocker to emerge and begin destroying the world. Game World Shocker also had an alliance with the Space Shogunate Jark Matter, as seen when Shocker Leader III summoned a Jark Matter Big Moraimarz Robo to pilot.

This version of Shocker was later revived again by Kuroto Dan and Totema as part of the former's scheme to revive himself, now comprised of an army of revived monsters that continuously revived after being defeated. The Game World Shocker forces later fought against the second Kamen Sentai Gorider after Kuroto unleashed them upon the real world.

In OOO, Den-O, All Riders: Let's Go, Kamen Riders!, when Ankh and Eiji accidentally left a Core Medal in 1971, they allowed Shocker to defeat the Double Riders and take over the world, with the members of other evil organizations joining them in their conquest. 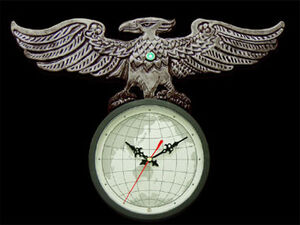 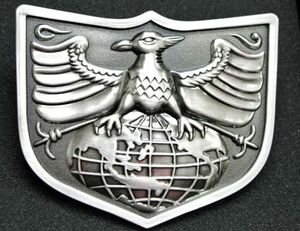 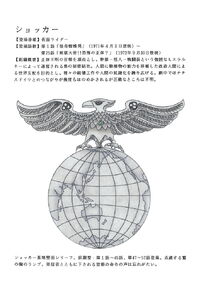 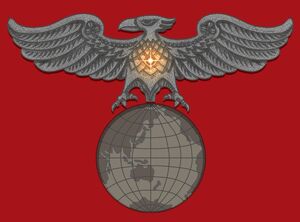 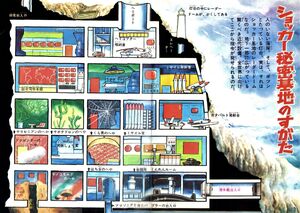 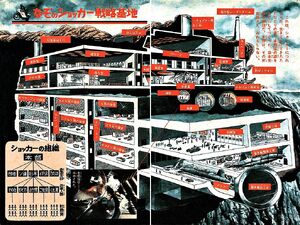 SHOCKER interior
Add a photo to this gallery 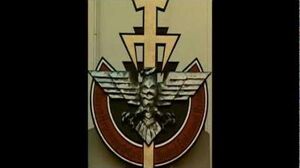 Retrieved from "https://villains.fandom.com/wiki/Shocker_(Kamen_Rider)?oldid=4003126"
Community content is available under CC-BY-SA unless otherwise noted.