Aid Shocker in its goals.

The Shocker Combatmen are troopers used by Shocker in their goal for world domination and antagonists in the 1971 Tokusatsu television series Kamen Rider. While some are slightly modified humans, others are said to be creations of the Great Leader of Shocker who are not really alive but puppets that follow every command of him. They are powerful enough to defeat an average human but are not as strong as trained personnel like Kazuya Taki.

All Shocker Combatmen give out a "Yee!" cry, which is usually the most they say. They also occasionally use this cry with the "Sieg Hail" salute used by WWII Nazis. Dai-Shocker and Super Shocker's Combatmen have the special ability to transform into missiles to attack enemies.

The first brand of Shocker Combatmen were people dressed in black clothing and berets with red scarves and a belt with Shocker's insignia. As the series moved on new types were introduced. When the Shocker kaijin Saboteguron arrived the iconic image of Shocker soldiers still seen today, people dressed in black clothes and wearing gray makeup, wearing masks similar to lucha libre fighters, that have an insignia on the forehead, while the more elite Combatmen had red designs to their normal black clothes. The most recognizable costumes are the Combatmen in black clothes with white spine and ribcage designs on the shirt and a mask with the Shocker emblem.

Following Dai-Shocker's destruction, the remaining Dai-Shocker Combatmen went on to serve the Super Shocker organization headed by Colonel Zol (really Narutaki in disguise) and Super Dr. Shinigami. They took part in the plan to revive the [[neo organis

In episodes 27 and 28 of Kamen Rider OOO (which were incidentally the 999th and 1000th Kamen Rider episodes), a Shocker Combatman named In Sendo appeared who had a long grudge against the Kamen Riders for always defeating his comrades. But he was not entirely evil as he saved Eiji Hino from falling crates and later realized he was only being used as a pawn by Kazari to create the Ika-Jaguar Yummy. The soldier's desire for strength in numbers allowed the Yummy to duplicate itself into a small army of various Showa-era combat men, but he became disillusioned upon discovering that these were merely made of medals.

The product of Sendo's desire for like-minded allies to defeat the Kamen Riders, the Combatman Yummy based on the grunts from past villainous groups who fought against Kamen Riders, whom Sendo refers to as the "past generation combatmen" . The Combatmen Yummy include, among many others, the Shocker Combatmen Yummy.

A trio of Shocker Combatmen were seen fighting Ichigo in new video footage that Tomoko Nozama found on the internet, along with other clips of past Kamen Riders, who are now known as urban legends.

The design of the Shocker Combatmen went through several changes in the original Kamen Rider show.

For the first thirteen episodes, the Shocker Combatmen wore plain black jumpsuits and berets instead of masks, having their faces exposed and painted green. There also existed a set of female Shocker Combetmen who dressed similar to the male ones, except they had skirts and fishnet stockings instead of pants and wore red scarves.

Elite variants who lead squads of regular Shocker Combatmen. They often work in pairs or groups of three. They are designated by the red markings on their suits. Despite their elite status, they do not seem to be particularly stronger than regular Combatants.

Scientific variants of the Shocker Combatmen, they wear all-white versions of the standard Combetmen uniform. They are responsible for performing the remodeling surgeries on test subjects to convert them into Shocker Kaijin. 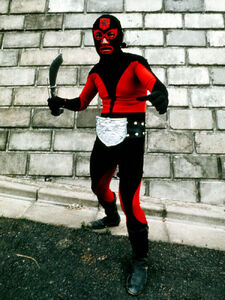 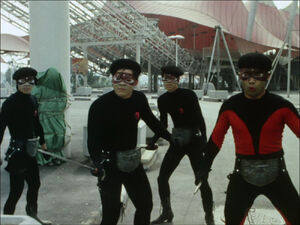 Shocker Combatmen as they appeared in early episodes. 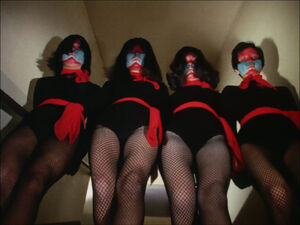 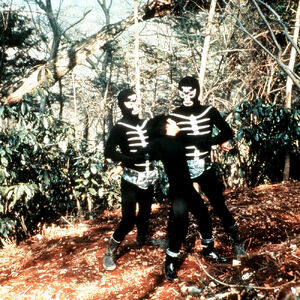 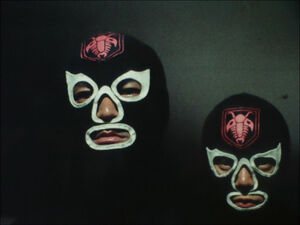 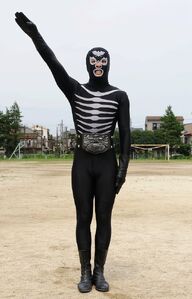 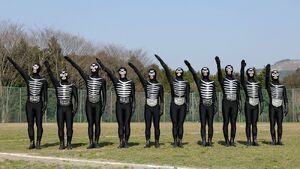 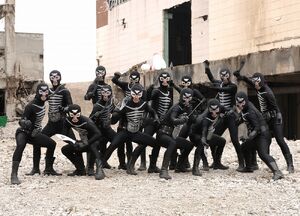 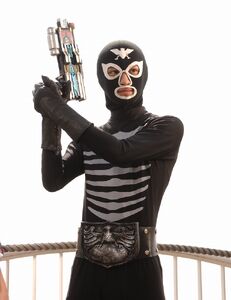 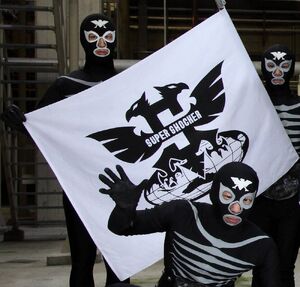 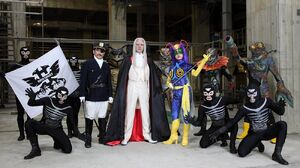 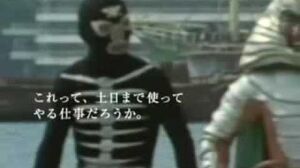