Shocker Greeed is a Greeed kaijin created by Shocker by Shocker and the secondary antagonist of the Kamen Rider crossover movie OOO, Den-O, All Riders: Let's Go Kamen Riders.

He was voiced by Hideo Ishikawa.

Shocker at some point discovered the Core Medals from 800 years ago and modified one of the 10th Medals to become the Shocker Medal, though they were unable to make anything from it.

However, Shocker would later find a use for it when Ankh dropped a Cell Medal in 1971 while following New Den-O back. The Cell Medal was found by a Shocker Combatmen, who gave it to General Black. Black presented it to the Great Leader, who combines it with the Shocker Medal and creates Shocker Greeed, the strongest Shocker kaijin.

Shocker sent the Greeed kaijin to fight the Kamen Riders 1 and 2. Shocker Greeed defeats both of them and brings the two Riders back to Shocker, where they are brainwashed to be loyal to the organization as they were originally intended to. With the Double Riders and Shocker Greeed under their control, Shocker was able to successfully take over the world.

Shocker Greeed was later sent after OOO and New Den-O to stop the Riders from altering the past back to the way it was. Shocker Greeed defeats them, but is told to stop by the Double Riders.

However, a boy in the Kamen Rider Squad named Naoki was left in the past during OOO and New Den-O's attempts to change history and grew up to join Shocker as a brilliant scientist. Despite siding with Shocker, Naoki remained loyal to the Kamen Riders and undid the brainwashing of the Double Riders, allowing the two to fight back against Shocker in the present day. Kamen Riders 1 and 2 take on the Shocker Greeed in a rematch and manage to destroy the Greeed with a Rider Double Kick.

As he explodes, The Shocker Greeed yells out the traditional Shocker "Banzai!". Ankh then recovers its Medal and gives it to Eiji to use in conjunction with the Imagin Medal created from Momotaros to fight the Great Leader as OOO Tamashii Combo. After the Riders win, the Medal dissolves forever.

The Shocker Greeed appears as a part of the underground Badan Empire. It returned to the living world when the Badan Empire invades it and can be seen fighting against Kamen Rider ZX in the final battle.

The Shocker Greeed was part of the endlessly reviving army of Shocker kaijin in the amusement park Game World created by Kuroto Dan as part of his plot to revive himself. When the Game World was destroyed by Kazuma Kenzaki's Joker Undead power, Kamen Rider Genm Zombie Gamer led the army of kaijin against the Kamen Riders, but they were defeated by Kamen Rider Ex-Aid Maximum Gamer Level 99 and the second Kamen Sentai Gorider. 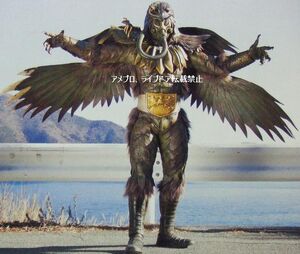 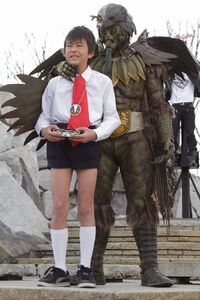 Shocker Greeed with a schoolboy. 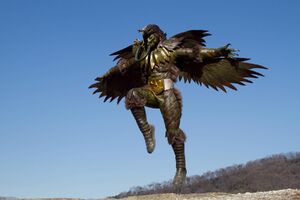