Shocker Leader III is the new leader of the Shocker forces who took refuge in the Game World and a major antagonist in Kamen Rider x Super Sentai: Super Hero Taisen. His true form is Oogumo Great Leader.

He is portrayed by Diamond✡Yukai.

After Team Ex-Aid won the Chou Super Hero Taisen tournament, they inadvertently triggered the Chou Shocker Taisen bonus stage, unleashing an army of past foes of the Kamen Riders and Super Sentai from the Game World to destroy the real world. As the Shocker army emerged in the real world, Shocker Leader III appeared and introduced himself before declaring Shocker's goals to destroy the world.

The Shocker army was met by the Kyurangers, Zyuohgers and Kamen Rider Snipe along with several Kamen Riders and Super Sentai from the Game World. During the ensuing fight between the Super Heroes and Shocker's forces Shocker Leader III fought the Game World KyoryuGold and defeated him.

Eventually, Shocker Leader III assumed his true form as Oogumo Great Leader. After his army was destroyed and the connection between the Game World and real world was severed, undoing the damage the Game World enemies had inflicted, Oogumo Great Leader summoned a Big Moraimarz Robo from the Space Shogunate Jark Matter for him to pilot against the Super Sentai and Kamen Riders. However, he was defeated by the Kyurangers in the Shishi Voyager and a giant-sized Ex-Aid. 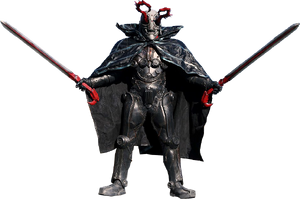 Oogumo Great Leader
Add a photo to this gallery

Retrieved from "https://villains.fandom.com/wiki/Shocker_Leader_III?oldid=3542635"
Community content is available under CC-BY-SA unless otherwise noted.