Can transform into a Cybertronian tank

Shockwave is a recurring antagonist on the show Transformers: Animated. He is an undercover spy for Megatron on a mission to infiltrate Cybertron. He is voiced by Corey Burton, who also voiced Brainiac in the DC Animated Universe.

Shockwave was a young Decepticon who secretly slipped into his enemy's ranks and disguised himself as a loyal, friendly Autobot nicknamed Longarm.

He befriended several Autobots and became a respected Cybertronian Intelligence director titled Longarm Prime after secretly murdering the previous director and constantly reported back to his true master, Megatron. When two squads of Autobot and Decepticons led by Optimus Prime and Megatron crashed landed on a mysterious planet called Earth, Megatron contacted Shockwave, still on Cybertron, and initiated a plan to construct a space bridge from Earth to Cybertron in order to take them both over.

After Megatron was defeated, almost all Decepticons were executed, and Shockwave was exposed for the traitor that he was, the two sociopathic robots were arrested and locked away in a Cybertronian prison for good.

Not long afterward, the entire Space Bridge Nexus powered down. Confused, Longarm questioned Cybertron Command, and Cliffjumperinformed him that Ultra Magnus had ordered the shutdown in order to prevent the Decepticons from accessing Cybertron. Just then, Agent Blurrarrived and (very) quickly informed Longarm that while on Earth, he had intercepted a transmission between Megatron and his double agent on Cybertron, Shockwave.

Further, Blurr noted that Shockwave's voice didn't match that of the suspected Wasp, but quick search of the Cybertron Intel Database would allow them to find the true identity of the traitor. Shocked, Longarm asked if Blurr had shared this information with anyone else.

When Blurr replied that he had not, Shockwave decided it would be wise to quiet him down—permanently. Blurr eluded his initial attempts and escaped into the corridors around the nexus control center. Rather than give chase, Shockwave simply had the corridors' security hatches slam shut and close in on Blurr, trapping and crushing him.

At the Metroplex, Longarm handed over Blurr's remains to Cliffjumper, calling the small cube "sensitive materials." He received an incoming transmission from Lord Megatron in his private office.

They traded information on their respective setbacks, but Megatron assured Shockwave that he had a method of preventing the Earth Autobots from blowing Shockwave's cover. Shortly, Longarm Prime attended an Autobot High Council meeting, where Ultra Magnus declared that the Decepticons' attacks were too organized to be random acts of sabotage. Rather, evidence pointed to a double agent in the Autobots' midst.

Longarm nervously pointed out that the Decepticon uprisings had started after Wasp's escape, making the cause plain. Ultra Magnus agreed and ordered Jazz and Sentinel Prime to organize an Elite Guard Unit to find the escapee. He then requested that the Earth-bound Autobots be contacted. Increasingly distraught, Longarm declared that all communications should be first filtered through him, without exceptions for the sake of security and the protection of Cybertron, naturally. TransWarped

Unfortunately, Longarm's insistence on diverting blame toward Wasp was his undoing. When Wasp headed to Earth, Ultra Magnus didn't inform him about Wasp's destination until the Elite Guard's ship was in sight of the planet. Knowing he was on the verge of being exposed, Shockwave tried to contact Megatron, but still received no response. With no other orders on how to proceed, Shockwave took matters into his own hands: In an effort to inflict one last blow to the Autobots, Shockwave attacked and seriously damaged Ultra Magnus, stealing his Magnus hammer in the process. 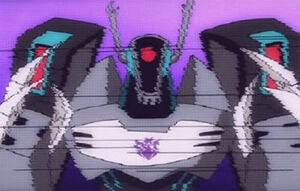 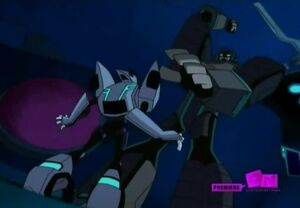 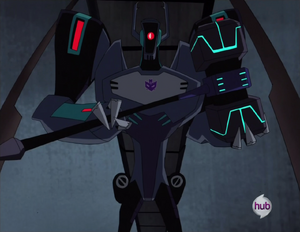 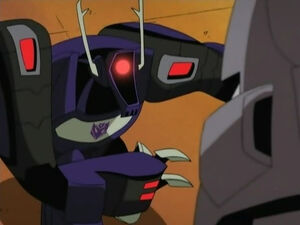 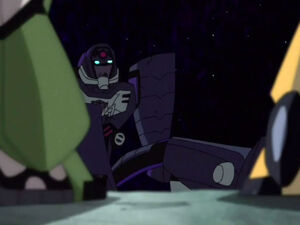 Shockwave, as a miscolored Longarm, at the mercy of Bumblebee and Bulkhead.
Add a photo to this gallery 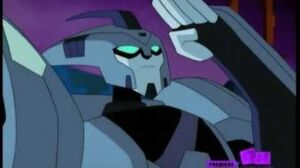 Retrieved from "https://villains.fandom.com/wiki/Shockwave_(Transformers_Animated)?oldid=3245890"
Community content is available under CC-BY-SA unless otherwise noted.