NOTE: This article is about the incarnation of Shockwave from the Transformers live-action film series. The mainstream version can be found here: Shockwave (Transformers).

Second-in-Command of the Decepticons

Shooting with his huge cannon

Help his master; Megatron, as well as Sentinel Prime, in their plot to rebuild Cybertron over Earth (succeeded).

Shockwave is a major antagonist in the 2011 film Transformers: Dark of the Moon and the 2018 film Bumblebee. He was a high-ranking Decepticon scientist and one of Megatron's loyal subordinates.

At some point during Revenge of the Fallen, during Devastator's attack on the Autobot twins, a newspaper bearing an image of Shockwave (or probably his G1 portrayal) marked as "Mysterious Robot Spotted" was seen, before being sucked by the giant Decepticon.

Prior to the events of the first film, Shockwave and his pet Driller crashed into Earth in 1908, placing them into stasis mode. They were later discovered by the Russians and a facility was built above to contain them.

In 2010, Megatron freed Shockwave and brought him to his base in Namibia, where he was eager to get back to killing Autobots. Shockwave and Astrotrain made their presence known on Earth near Dalian, where they killed Autobots Longarm and Salvage and stole material for a construction project.

After contacting Astrotrain for an update on their project, Shockwave tracked Divebomb's radiation trail back to Starscream's base of operations, in a junkyard on the outskirts of Mexico City. Blasting his way through Starscream's guards, Shockwave informed him that Megatron "requested his services." Astrotrain radioed Shockwave, telling him the "brain unit" scrap drone that held the control software for the machine he was constructing had escaped. Shockwave charged Starscream and his followers with recovering the drone.

Shockwave contacted Starscream, who thought he was promised the Autobots would be occupied. Shockwave countered that they were occupied, but with Starscream, leaving Shockwave free to leave a message for Optimus Prime at the NEST Headquarters in Diego Garcia. After killing Knock Out, Dune Runner, and other Autobots, Shockwave confronted the humans. When Shockwave asked who was in command, Theodore Galloway told him that he was. Shockwave killed Galloway and the other humans save one, and he asked his question once more.

After killing Jolt, he and Fearswoop left Diego Garcia, then he arrived in Philadelphia killing Elita-One in the process and shot down Wheeljack and Mirage. Enraged by the death of Elita-One and the other Autobots, Optimus battled Shockwave, overpowering and pummelling the Decepticon. Prime was about to kill Shockwave, until the Driller came to save his master. The badly damaged Shockwave returned to Namibia along Starscream and Soundwave.

Shockwave and his pet Driller attacked the Autobots when they were summoned to Chernobyl by Decepticon agent Alexi Voskhod. After Optimus Prime fought the gigantic beast to retrieve the fuel cell, Shockwave emerged from it to reveal himself in front of Optimus before retreating underground, leaving the latter very disturbed to see him.

Shockwave and his Driller took part in the invasion of Chicago. He and Driller emerged from beneath the convoy of the Autobots, where his pet manages to separate Optimus from his trailer.

He part ways with his pet and proceeded in tracking down the Autobots. The Wreckers are sent to distract him by peppering his armor with machine-gun bullets. Shockwave used a car as a shield and fired at them, wherein they drove off before he pursuit them down the road, missing Wheelie and Brains, who quickly fled. Later, he noticed humans consisting of Samuel James Witwicky, Carly Spencer, Chief Master Sergeant Robert Epps and their team hiding inside an abandoned Willis Tower, so he sent his pet Driller to kill them all. Unfortunately, Optimus came to the rescue by killing the Driller on purpose using his jetpack.

Shockwave, enraged by the death of his pet, avenged it by opening fire on the Autobot leader until he got tangled by tower crane wires, temporarily trapping him. He soon joined Soundwave, Barricade and several Decepticons into rounding up other Autobots, consisting of Bumblebee, Sideswipe, Mirage/Dino and Wheeljack/Que, who was later killed by Soundwave. The Decepticons are then distracted by their own gunship controlled by Wheelie and Brains, thus giving the Autobots a chance to escape.

Shockwave retreated alongside with Barricade & some other Decepticons before falling into a trap set by the NEST, where he is blinded by one of the soldiers' parachutes and then being shot in the eye by the Wreckers, causing it to dangle by its wires, as well as damaging his hose and gunpack. Optimus then came back charging into the battle, killing several Decepticons consisting of lookalikes of Brawl, Sideways, Bonecrusher, Long Haul, and Scrapper. Optimus then charges towards Shockwave, and kills him by punching him hard in the chest and ripping out his eye and throat, commanding "YOU DIE!". Optimus then uses the Decepticon's cannon to shoot out the control pillar set up in the city.

After the events of Dark of the Moon, KSI manages to recover parts of Shockwave's body and used it to create two-headed clones of him called "Two-Heads". After Galvatron becomes fully aware and took control of many of the man-made KSI Transformers came to do his bidding, including the two-headed clones. One of these clones manages to fight Hound in Hong Kong, before being slain by the latter using his cigar by spitting it at both of their heads. Another clone was then killed by Optimus Prime by throwing Lockdown's grenade at the man-made Transformers. Another was last seen joining Galvatron ride Lockdown's ship upon escape.

Nitro Zeus, a Decepticon whose head bears very similar appearance to Shockwave's appears in Transformers: The Last Knight. According to his TRF profile, the reason for Nitro's travel to Earth involves avenging Shockwave. Viviane mentions Shockwave by name at one point. 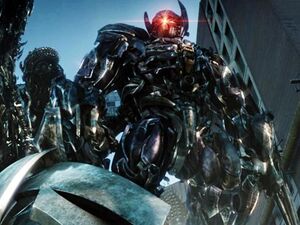 Shockwave with his pet Driller 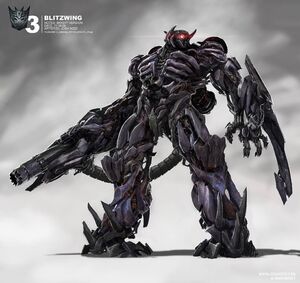 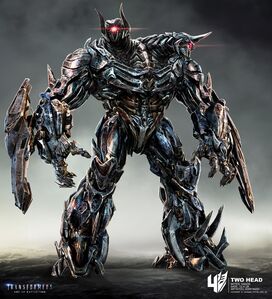 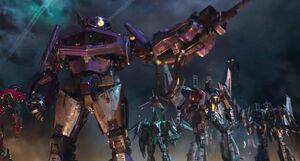 G1 Shockwave in Bumblebee Movie
Add a photo to this gallery 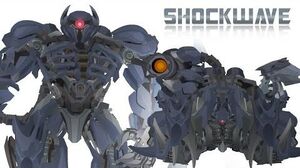 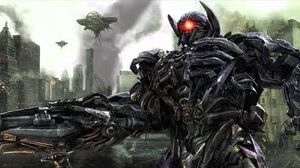 Transformers D.O.T.M. all Shockwave scenes
Add a photo to this gallery

Retrieved from "https://villains.fandom.com/wiki/Shockwave_(Transformers_Film_Series)?oldid=3488568"
Community content is available under CC-BY-SA unless otherwise noted.