Rebelling against the Elder Things

The Shoggoth is/are a monster(s) depicted in the works of H.P. Lovecraft. The Shoggoth is/are almost always depicted as very large and frightening. It/they serve(s) as the main antagonist(s) of the Lovecraft dark-fantasy novel, ​At the Mountains of Madness​, but was first mentioned in Fungi from Yuggoth.

The definitive description of Shoggoth come(s) from the above-quoted story. In it, Lovecraft writes about it/them as massive amoeba-like creature(s) made out of iridescent black slime, with multiple eyes "floating" on the surface. It/they is/are described as "protoplasmic", lacking any default body shape and instead being able to form limbs and organs at will. Shoggoth measure(s) 15 feet across when a sphere, though the story mentions ones of much greater size.

The Mythos most commonly shows Shoggoth, although intelligent to some degree, dealing with problems using its/their great size and strength. For instance, the original one mentioned in At the Mountains of Madness simply rolled over and crushed giant albino penguins that were in the way as it pursued the characters.

The character Abdul Alhazred (aka Mad Arab), found the mere idea of their existence on Earth terrifying.

Shoggoth was/were created by the Old One (not to be confused with Great Old Ones). Being amorphous, it/they could take on any shape needed, making it/them very versatile within its/their aquatic environment. Though able to "understand" the Old One's language, it/they had no real consciousness and was/were controlled through hypnotic suggestion.

Shoggoth built the underwater cities for Old One (aka Elder Things). Over millions of years of existence, Shoggoth mutated and gained independent minds. Some time after this, it/they rebelled. Eventually, the Elder Things succeeded in quelling the insurrection, but thereafter watched them more carefully. By this point, exterminating it/them was not an option as the Elder Things were fully dependent on Shoggoth for labor and could not replace it/them. It/they was/were during this time that, despite Old One's wishes, Shoggoth demonstrated an ability to survive on land.

Within the Mythos, the existence of the Shoggoth possibly led to the accidental creation of Ubbo-Sathla, a god-like entity supposedly responsible for the origin of all life on Earth, though At The Mountains of Madness brings up the possibility of the Elder Things being the creators, having made early life as discarded experiments in bio-engineering.

As the two progress further into the city, they are ultimately drawn to a massive, ominous entrance which is the opening of a tunnel which they believe leads into the subterranean region described in the murals. Compulsively they are drawn in, finding further horrors: evidence of dead Old Ones caught in a brutal struggle and blind six-foot-tall penguins wandering around placidly. They are confronted with an immense, ululating horror which they identify as a Shoggoth. They escape with their lives using luck and diversion.

The Shoggoth has/have become one of Lovecraft's most well-known and popular creation(s). Thus, it has warranted various appearances. 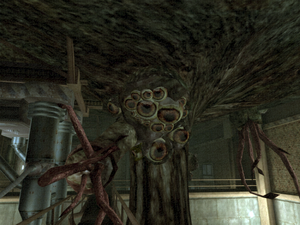 A Shoggoth as seen in Call of Cthulhu: Dark Corners of The World. 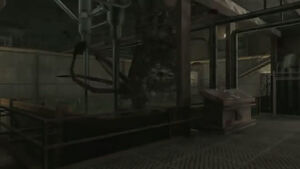 The first Shoggoth that the player finds in Call of Cthulhu: Dark Corners of The World. 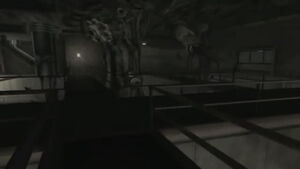 The second Shoggoth found in Call of Cthulhu: Dark Corners of The World. 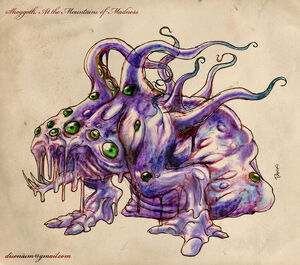 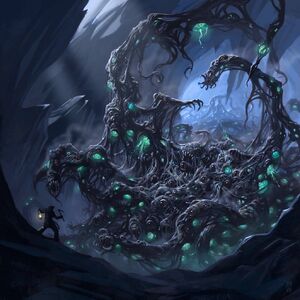 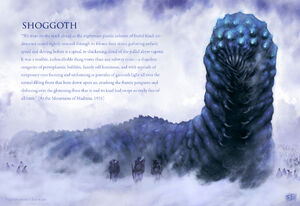 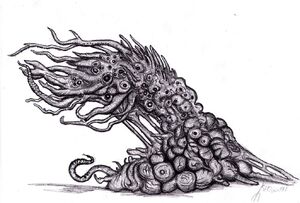 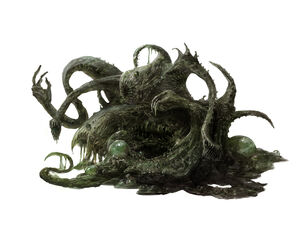 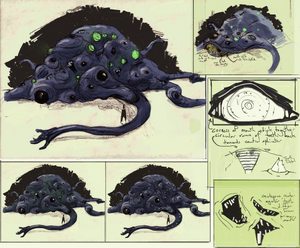 Retrieved from "https://villains.fandom.com/wiki/Shoggoth?oldid=3999673"
Community content is available under CC-BY-SA unless otherwise noted.