Riding his bicycle.
Putting cherries atop victims melted by the Klowns' Acid Pies as if they were fancy ice cream treats.

Kill humans to suck out their blood (failed).

Shorty is one of the seventeen main antagonists of the 1988 sci-fi-horror-comedy film Killer Klowns from Outer Space. He is the second-smallest Killer Klown who had green hair coming out in three directions on his head and wore a yellow suit.

Shorty debuted when he was walking with Rudy, Jumbo and other Klowns to Crescent Cove. Near the beginning of the film, Shorty faced a motorcycle gang of gangsters with his mini-bicycle. One of the gangsters had destroyed Shorty's bike, which made Shorty challenge him to a duel. He thought that Shorty was just fooling around, saying “What are you going to do? Knock my block off?”. Shorty had punched off his head with boxing gloves, killing him and causing all the other motorcycle gang to flee from Shorty.

At a store when Shorty and Rudy were searching among the items, Shorty had sneezed in a white powder substance. Shorty reappeared inside the pizza box that Bibbo was carrying for a teenage girl who didn’t order pizza. She was shocked to find Shorty quickly pop out and then he used his cotton candy gun to encase the teenage girl inside a cotton candy cocoon.

Shorty was seen again holding a trampoline with Bibbo, Rudy and Chubby in firefighter helmets when Debbie attempted to jump out a window to get away from Slim. Debbie screamed loudly when she saw them and was encased in a balloon by Slim inside her house when she chose not to jump out. Shorty was inside the Klown Car where he was annoyed by a policeman who denied them access to the Big Top. Shorty joined Bibbo, Fatso, Rudy, and Slim in throwing their deadly pies at the annoying pest to kill him.

Shorty had put an enormous red cherry on top of the melted ice-cream scoop shaped remains of the dead policeman to make it resemble a sundae, with Shorty verbally displaying his excitement.

Unlike other humans, the five Klowns chose to kill the policeman by melting him with acid pies rather than snatch him away to store him for the harvest, though this was likely because the Klowns particularly are afraid of getting their noses shot by policemen or they did not have their weapons to capture his body for food later at the time and resorted to throwing pies at him.

Shorty also came out when Debbie, Mike and Officer Hanson were discovered at the Big Top where he was carrying a yellow stick trying to hit them and was on the highest row the Klowns were on trying to whack them until the Terenzi Brothers drove their ice cream truck using the Jojo head on top of it to demand the Klowns to not attack them. 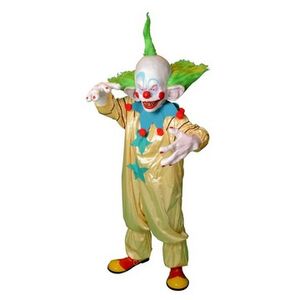 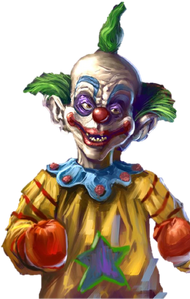 Shorty Render
Add a photo to this gallery 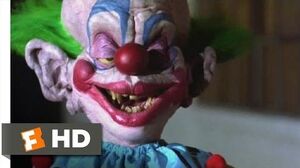 Retrieved from "https://villains.fandom.com/wiki/Shorty?oldid=4195367"
Community content is available under CC-BY-SA unless otherwise noted.