The Shotmaker is a minor antagonist in the original Metal Gear, being an Outer Heaven mercenary sent to assassinate Solid Snake in 1995.

The Shotmaker was formerly a Spetsnaz agent infamous for his skills with a riot gun, thus his codename. After the fall of the Soviet Union, the Shotmaker was recruited into Outer Heaven as a deadly mercenary and the warden of the base's prison. It where there where he looked over his many prisoners, including a recently captured Gray Fox.

When rookie FOXHOUND operative Solid Snake was sent to rescue Gray Fox and destroy the nuclear super-weapon known as Metal Gear, the agent intercepted Outer Heaven easily and got himself caught to get access to the prison. After escaping his cell, Snake rescued Fox and ventured outside only to find the armed Shotmaker waiting for him. After a short fight, Snake defeated and killed the Shotmaker. 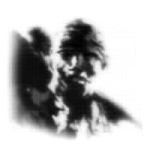