Shou Tucker (ショウ・タッカー, Shō Takkā) is a minor antagonist in the Fullmetal Alchemist manga and 2009 anime. He is a State Alchemist who reportedly had created a chimera with the ability to speak, and is visited by Edward and Alphonse Elric. During their time at Tucker's estate, though, the brothers uncover the horrifying truth behind his work. Unlike his 2003 counterpart, this version of Shou Tucker is far more twisted and is even more psychopathic and inhuman of his work.

He was voiced by Makoto Nagai in the Japanese version, and Chuck Huber in the English dubbed version.

In the original manga and the 2009 series Fullmetal Alchemist: Brotherhood, Shou Tucker is introduced as an alchemist under Roy Mustang's jurisdiction in East City and referred to the Elric brothers due to his expansive work in bio-alchemy. The brothers stay at his estate and befriend his young daughter Nina and the family dog Alexander. He mentions that two years ago, his wife left them due to stress from his work, much to Nina's hope that she will one day return. The next day, he created the notable talking chimera that earned him his State Alchemist license - although its words were "I want to die". Tragically, the chimera died not long afterwards, refusing to eat.

Stressed with wanting to keep his license, Tucker goes into his lab and later informs the Elric brothers that he has successfully created another talking chimera. Edward, who has growing suspicions of Tucker's actions in the past, questions about the awfully close timing of the Sewing-Life Alchemist's wife's leaving and the creation of the suicidal chimera, revealing that Tucker had used his own wife to create the chimera. Fears confirmed, Edward angrily reveals the conclusion that Tucker used Nina and Alexander to create this new talking chimera (that refers to Edward as "Big Brother"). Enraged, Edward brutally beats up Tucker who smugly declares that they are alike in their pursuit of knowledge and alchemical transgressions, likening his use of Nina and Alexander in the chimera creation to the Elrics' attempt to resurrect their dead mother. Alphonse keeps Edward from killing the alchemist and the two have Tucker detained on house arrest.

However, Scar appears on the estate in his personal vengeance to murder all State Alchemists. Killing the guards outside, Scar seizes Tucker's face and kills him with a surge of alchemical energy, which blew up his organs on the inside. Seeing the Nina/Alexander chimera as a tortured soul, he euthanizes her.

Tucker briefly appears in a later nightmare of Edward's, accusing him of being a monster for the transgression of attempting to revive their mother. His impression on the brothers is also revisited in the anime, particularly in how Alphonse vows to never let another friend/ally be killed because of them.

At first, Shou comes off as a soft-spoken and talkative man who often prefers to keep to himself rather than socialize. When he has guests around, he puts on a polite and chivalrous persona, and appears to be quite kind and pleasant. However, as his daughter Nina begins to become aware of, he often has more interest in his work than his family. Shou is actually affected by skepticism due to his systematic investigation producing any infeasible results to the point that he started to lack any self-esteeem.

In reality, he is an extremely selfish, vain, desperate and manipulative man who would condemn his family to a fate worse than death to get what he wants, such as becoming (and later retaining his position) as a State Alchemist as well as retain his good reputation. After his atrocious acts were unveiled, Shou has an utter lack of remorse for his actions and completely refuses to own up to what he had done to his family. He was also too greedy to give up his lifestyle. Hence his decision to betray Nina and his pet dog.

In addition to his lack of remorse for his crimes, Tucker also refuses to consider that he is in the wrong. Even in death, he remained ignorant to how much of a monster he's become. Therefore, unlike most examples, his supposed lack of awareness of how his crimes impacted those around him makes him even more heinous as he is aware that what he did was wrong, but felt it was justifed even though he did it only because he wanted to keep his job. 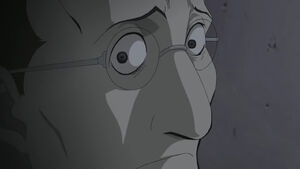 Tucker realizing that Ed found out that he turned Nina and Alexander into a talking chimera. 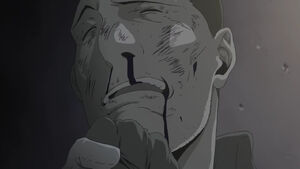 Tucker bloodied after being beaten by Ed. 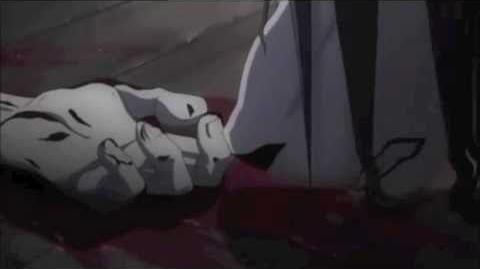 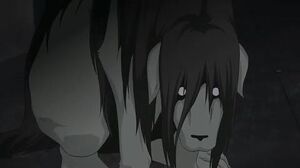