Shou Tucker is a minor antagonist from the 2003 adaptation of Fullmetal Alchemist. As opposed to his manga/2009 anime counterpart, this version lives and tries to redeem himself.

Tucker is introduced as a military researcher, who takes in Edward and Alphonse Elric while they study for their State Alchemy exam. The two befriend Shou's daughter Nina and the family dog Alexander. Tucker reveals aspects of his past to the Elric brothers, including that his wife left him because of him focusing too much on his work. The day after, Tucker created a chimera that earned him his license, though it starved itself and died later.

Under the stress of Basque Grand, Tucker is forced to create another masterpiece to have his license renewed and the threat of eviction lifted. Fearing the safety of his daughter, Shou proceeds to create a new chimera. Edward and Alphonse observe it, but are horrified when it calls Edward "Big Brother" (Nina's nickname for Edward). The two realize that the chimera is a hybrid of Nina and Alexander, alchemically fused together. Edward realizes that the past chimera was really Tucker's wife, and begins to attack him. Alphonse stops Edward's rampage, and Tucker is put under house arrest.

Tucker is arrested and taken away by MPs along with the Nina/Alexander Chimera. Not wanting her to become a military experiment under Grand's orders, Edward uses alchemy to cause the truck carrying Tucker to crash, freeing the Nina chimera. Despite Edward's efforts, Scar still comes across and euthanizes the chimera, sensing its pain. Tucker is detained and reportedly executed by firing squad.

It is revealed that Tucker is instead made a researcher and test subject in this anime's incarnation of Lab 5. In this time, he created chimeras to be used by the military as weapons and was the only one for the most part that could control them. During this process, Tucker became fused with a canine entity in a kind of reverse crucifixion, becoming a monstrous chimera with alchemically-fused glasses that speaks in a whispered tone. Tucker aids the Homunculi, believing that their nature will provide insight on how to restore Nina back to life. He is shown carrying dolls of his deceased daughter, determined to bring her back and use them as the vessels for her soul.

After the attack on Lab 5, Tucker joins with the chimeras working for Greed to seek out more information in exchange for acting as a doctor to the chimeras. Following Greed's defeat and the deaths of most of the chimeras, he goes under the service of Frank Archer, still determined to bring his daughter back using the resources permitted by Archer reinstating Tucker's license. When Alphonse has the Philosopher's Stone grafted into his body following the fight between Solf J. Kimblee and Scar, Tucker tricks Alphonse into being used under the pretense of teaching him how to use it. Against everything, Tucker manages to pull off the first non-flawed human transmutation but due to his lack of will, the Nina doll remains in a zombie-like state. He attempts another shot at the process but is halted by Sloth who cruelly points out his failure and takes Alphonse away.

The last time Tucker is seen in the series, he is scribbling down equations on the wall while still trying to uncover the next possible way to revive his daughter. It is unknown whether he succeeded. However, it is possible that he either got arrested again for his crimes or that he spent the rest of his life trying to find a way to bring Nina back. 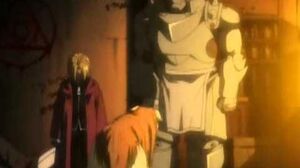