Shrapnel's body consists of hundreds of pieces of an organic-metallic substance that can be projected into explosive bursts.
He does not require food or water to survive due to his altered physiology.
Aggression Empowerment (Batman: The Brave and the Bold universe only)

Escape the Doom Patrol after being discovered (succeeded).

Powerful Supervillain
Shrapnel is a supervillain in the DC Comics universe and is an enemy of the Doom Patrol and the Outsiders.

Very little about Shrapnel's past and identity is known, although it is known that his name is Mark Scheffer and that he was a normal human at one time and has an ex-wife and two very human blond-haired daughters. Shrapnel has tried to stay incognito, but failed to do so after deciding to slaughter anyone who caught even a glimpse of him.

He was discovered by the Doom Patrol in Kansas while on a murder spree and forced into combat by the team. Celsius quickly flooded Shrapnel encasing him within a solid prison block of ice. Shrapnel blew it apart, hitting Mrs. Caulder point blank and hospitalizing the heroine.

It is also noted that Lodestone was not able to magnetize some control over Shrapnel. It was energy blasting Tempest who worked out that Shrapnel is a series of organic cells creating a single consciousness- that feeds on the blood of victims. Shrapnel escaped the encounter with the Doom Patrol.

He has since joined the Secret Society of Super Villains. Shrapnel has later resurfaced as one of the exiled supervillains in Salvation Run.

Following the Final Crisis, he was with Cheetah III's Secret Society of Super Villains at the time when Genocide was created. He was defeated by Wonder Woman.

Shrapnel appeared in the intercompany crossover JLA/Avengers as one of the villains who attack the Vision and Aquaman in Metropolis. He actually makes the first attack, but the Vision blocks it by increasing his density. After the two heroes are subdued, Shrapnel prepares to blast Aquaman when Green Lantern attacks him and knocks him out. 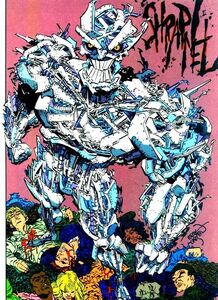 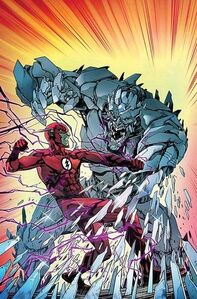 Shrapnel fights Superman with other supervillains

Shrapnel with other supervillains as part of the Cyborg Revenge Squad 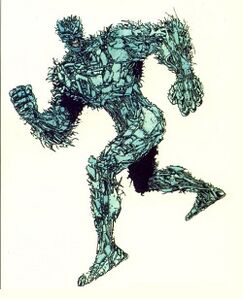