Destroy the TMNT and Batman.

Help Ra's al Ghul with his plot so he can have access to the Lazarus Pits and achieve pseudo-immortality (all failed).

The Shredder, real name Oroku Saki, is one of the two main antagonists (along with Ra's Al Ghul) in the film Batman vs. Teenage Mutant Ninja Turtles. He is the nemesis of the Ninja Turtles and the leader of the Foot Clan. This version serves as one of the evilest to date as he commits several heinous crimes for the sake of chaos.

He was voiced by Andrew Kishino, who also played Shang Tsung and Sektor in Mortal Kombat 9, VECTOR in Resident Evil: Operation Raccoon City, Janja and Ora in Disney's The Lion Guard series.

Shredder allies his forces with Ra's Al Ghul and the League of Assassins to build a machine designed to transform Gotham's citizens into unhinged mutants, so they can cause chaos throughout the world.

In exchange for his assistance, Ra's promises Shredder access to one of his Lazarus Pits, which would grant him eternal life. Shredder agrees despite his personal distaste towards Ra's. When he and the Foot Clan try to steal a cloud seeder from Wayne Enterprises, he ends up fighting Batman and barely comes out victorious after using an ancient technique once Bruce underestimates his skill. Before their battle, he killed once of his men for revealing information about their scheme.

Later, he fights Batman once more when the Turtles and the Bat Family arrive at Ace Chemicals to stop him and Ra's from activating the machine. Though he gains the upper hand on the Dark Knight once again, he is thrown off when Batman says "Cowabunga" and gains assistance from Raphael who breaks his nose after rolling into him with his shell. Batman, then defeats him while Leo defeats Ra's after getting past his fear of losing his brothers.

After Michaelangelo and Donatello destroy the machine, the debris sends him into a vat of chemicals as the plant explodes. In the post-credits scene, he is revealed to have survived the explosion and now strongly resembles the Joker. 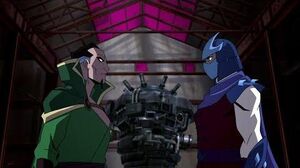 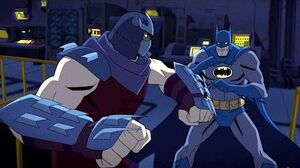 Batman vs TMNT Batman vs Shredder 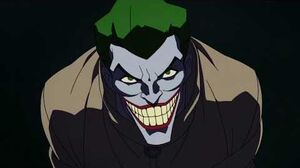 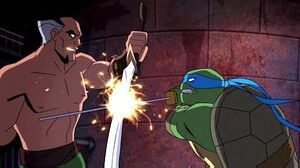 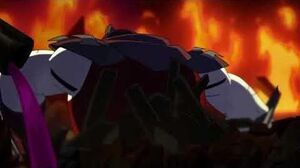 Retrieved from "https://villains.fandom.com/wiki/Shredder_(Batman_vs._TMNT)?oldid=3891846"
Community content is available under CC-BY-SA unless otherwise noted.