Take over the Afterlife
Kill the Turtles
Kill Splinter

Hegemonic Ninja
Oroku Saki, better known as the Shredder, is one of the two main antagonists (alongside Krang) of IDW Publishing's Teenage Mutant Ninja Turtles comic book series. He is the hegemonic leader of the Foot Clan and archenemy of the Turtles and their master Splinter.

In feudal Japan, Oroku Saki was a high-ranking member of the Foot Clan along with Hamato Yoshi. While Yoshi focused on his family, Saki surpassed him and was promoted to Jonin (leader) of the Foot. After an argument on his style of leadership, Saki sent ninja to murder Yoshi's wife, Tang Shen, and later Yoshi and his four sons.

With the help of Kitsune, Saki steals regenerative ooze from an Utrom known as "The Iron Demon" (later revealed to be Krang himself) which is used to preserve his body until he is awakened by his descendant Oroku Karai several centuries later in modern-day New York. During his time in stasis, his spirit conquered the realm of the Afterlife, where he learned he was destined to rule the earth world and eventually return to the Afterlife as a lost soul. Knowing the future, he vows to change it by conquering the realm of the Afterlife upon his return.

Shredder first appears in Micro-series #1 and in full costume on the final page of issue #9. Dan Duncan first designed Shredder with input from Mateus Santolouco and Kevin Eastman; originally wanting to depict a "beefy...monster" he decided to simplify the design and slimmed down the character based on the original Mirage design.

Seeking control in his forthcoming battle for power, Shredder offers Splinter a place in his army but Splinter refuses, revealing himself to be a reincarnated Hamato Yoshi. Saki then reveals his own identity and attacks Splinter, almost killing him when the Turtles arrive to rescue their father. Impressed by Leonardo, he orders his capture and conducts a plan involving kidnapping and stabbing Casey Jones. Shredder then has Kitsune brainwash Leonardo to become his new Chunin (second-in-command) and uses him for a show of strength to the criminal underworld. After the Turtles rescue Leonardo, Shredder calls a meeting with Krang and proposes an alliance in exchange for Utrom technologies, which Krang rejects. A short battle results in retreat on both sides and the revelation that Shredder had stolen some Utrom resources from Krang's compound to begin creating a mutant army.

In Issue #50, Shredder faced Splinter and the turtles in a final battle which he lost and briefly admitted his faults and also making Karai the new head of the Foot Clan. He was then killed by Splinter by having his sword slashed into the back of his head, killing him instantly. After his death Shredder's body is kept in a crypt that is guarded by Jennika who was assigned by Hamato Yoshi in order to learn humility. Shredder's tomb is eventually desecrated by the witch Kitsune who plans to revive Oroku Saki in order to restore order to the Foot Clan but the skull was still in Splinters possession.

Shredder will appear in the mini-series "Shredder in Hell" where it has depicted him after his death at the hands of Splinter in hell. This version does come back to life but became a reformed man. 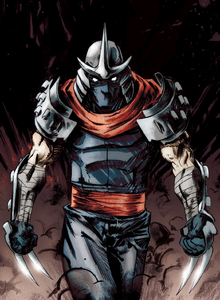 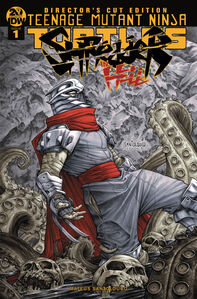 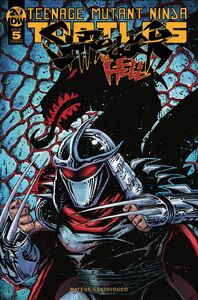