Defeat the Ninja Turtles and Splinter.

He is voiced by Hoon Lee, who ironically also voiced Master Splinter in the 2012 Teenage Mutant Ninja Turtles series.

Five hundred years ago, Oroku Saki was the leader of the Foot Clan, which lived in peace at the time. But then they were attacked by an unknown enemy and were nearly wiped out. Desperate to save his clan, Saki made a deal with an evil alien being, who granted him the Kuroi Yuroi, an enchanted suit of armor that made its wearer invincible. Donning the armor, Saki defeated the attackers and saved his clan from destruction, but it came at a terrible cost: The armor swallowed him, both body and soul, transforming him into the terrible demon warrior known as the Shredder.

Using Oroku Saki's authority, the Shredder lead the Foot Clan down a path of villainy, destroying many innocent lives in the process. However, he was opposed by Saki's own daughter, Karai, who created her own clan to fight off the Foot; the Hamato Clan. Karai battled the Shredder, but no mortal weapon could defeat the demon, and so she opted to make the ultimate sacrifice by sealing herself and Oroku Saki's spirit in the Twilight Realm. This also resulted in the Kuroi Yuroi coming apart, with its pieces scattering all across the world.

Since then, the Hamato Clan worked diligently and traditionally to keep the dark armor pieces out of the hands of the Foot Clan, who wish to reassemble it and revive their master. But then this tradition ended when the latest member, Hamato Yoshi abandoned his family's duties to pursue his own dreams of fame and fortune, thus allowing the Foot Clan to assemble most of the pieces.

In the present, 500 years since the Shredder's defeat, the Foot Lieutenant and Foot Brute now lead the Foot Clan, and have become dangerously close to collecting all the pieces of the dark armor. However, they met opposition from Hamato Yoshi's own sons, the Teenage Mutant Ninja Turtles, though they had no idea about the Foot's true goal or their own family legacy. To make matters more difficult, in addition to gathering all the pieces, they also required someone of great mystic power to don the armor and energize it in order to bring the Shredder back to life. Fortunately for them, they found the solution to both problems in the form of Baron Draxum, a powerful yokai warrior/alchemist and current archenemy of the TMNT. They forged an alliance with him to gather the pieces and defeat the turtles by promising the power to protect his kind from humanity.

Their alliance eventually paid off when they captured the turtles and using them as hostages to force Master Splinter to give up the final piece of the dark armor, the Shredder's skull, which the Hamato Clan kept to themselves for the past five centuries disguised as a tea kettle. Upon finally assembling the armor, Baron Draxum dons it and begins his rampage against the human race. However, the TMNT were able to defeat him nonetheless by exploiting a flaw in the armor (which they themselves caused as adolescents), causing the armor to reject Draxum, leaving him severely weakened. Unfortunately, this victory was short lived, as the dark armor had successfully absorbed Draxum's energy, allowing it to reassemble itself, much to the joy of the Foot leaders. The shriveled-up Baron then watched in horror as the resurrected Shredder stared down upon him.

Splinter, his sons and their friend, April O' Neil stand their ground against the Shredder as the demon began crawling and snarling towards them. But upon hearing the Foot Lieutenant, Brute and Recruit (the latter had just arrived via portal, which Draxum escaped through) cheer him on, the Shredder turns his attention towards them and begins attacking them. Seeing the Shredder act like a mindless monster attacking his own minions leaves Splinter confused, as he was told that the demon was an intelligent leader. Raph, Mikey and Donnie attempt to attack him, but Shredder easily knocks them all away. He then lunges at Leo, but then suddenly vanishes.

Big Mama uses her ring to bring her the Shadow Fiend, until the Hamato family defeats him, however, the Foot Recruit reveals the ring in her grasp and explains that the shadow fiend is actually Shredder.

"E-Turtle Sunshine of the Spotless Mind"

In the final episode, he pins Draxum down telling him that nobody betrays him and questions about the Empyrean. When he agrees, Shredder menacingly tells Splinter that he will absorb his essence and become unstoppable. He tells Cassandra to leave the Foot Lieutenant and the Foot Brute crushed.

After he arrives at the Crying Titan with Splinter and Draxum chained, he gets Cassandra to start the ritual before opening the head of the crying Titan to reveal the corpse of the Krang as well as the liquid he needed from his ship for the ritual. He chains Yoshi's essence to torture the rat; He then tells Draxum that he's useless and prepares to kill him. However, Raphael and the turtle stop him just in time for the finale.

Before the battle, he tells Cassandra to guard the ritual. The Turtles and April engage Oroku Saki into a fierce but epic battle. During it Donatello crushes him with a giant drill and weakens him. However he escapes and blasts the Turtles, April and Karai away before turning bak to Yoshi. Luckily, Cassandra turns on Saki and frees Splinter so he can give him a fatal blow.

Making one final attempt to destroy the Hamatos, The Turtles, April, Cassandra, Karai, Splinter and Draxum take a spiritual spear and try to finish the Shredder; However he is too powerful until Hamato Yoshi's Mother and the other Hamatos appear to help finish of the Shredder's reign of terror and cause his powerful armour to explode. After that, his tormented spirit was released and was able to rest peacefully with Karai and the others.

The Shredder wields the ability which is called the Armored Annihilator according to the Playmates toy. The Shredder has immense speed and strength at his disposal, able to wipe out cities and is stated to be a threat to all of Humanity. At full power, he is able to manipulate his body shape into different types of weaponry, and apparently if he absorbs the Hamato Essence, he will become unstoppable. 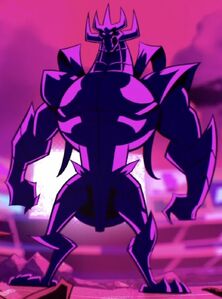 The Shredder upon his resurrection. 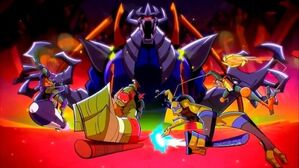 The Shredder in the Season 2 intro. 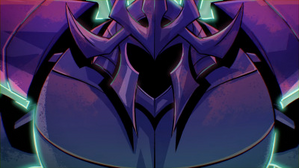 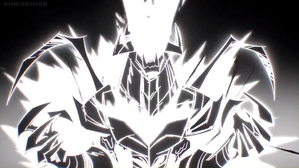 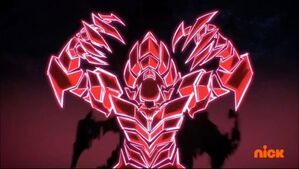 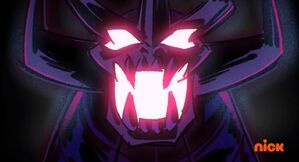 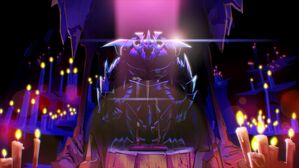 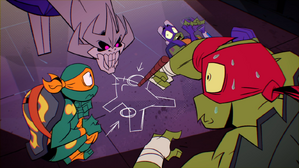 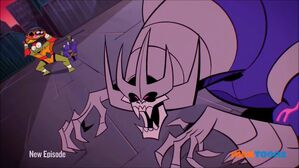 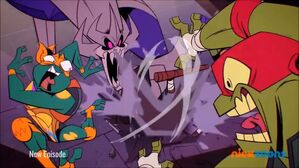