In the Mirage Comics, the Shredder Clones first appeared near the end of Teenage Mutant Ninja Turtles #20, Return to New York, Part 2. They murder the Triceraton soldier Zog as he is walking through the entrance to their abode. The Turtles battle them in the next issue, and during the brawl, the four-armed Shredder Clone loses an arm, which to the Turtles' surprise, seems to be exuding earthworms.

Shredder later elaborates briefly on the Shredder Clone's origin; using a blend of ancient magic and modern science, Foot scientists have trained a species of colony worm to feed on the remains of a person, and form together to become a replicate of said person. Shredder goes on to indicate that the Shredder Clones were experimental subjects, and on the fourth instance, they were fed Oroku Saki's charred remains. However, nothing is revealed of whose remains the worms were fed to create the Shredder Clones, nor is it mentioned why they have donned the Shredder's outfit.

In the 2003 series they are introduced at the end of Episode 21, Return to New York, Part 1. They are seen in liquid-filled vats deep within Foot Headquarters. The Shredder Clones are released when an alarm goes off shortly after the Turtles and Splinter arrive. In the following episode, the Turtles and Splinter battle them. Their appearance has changed slightly to more closely resemble this universe's version of the Shredder, and the "Claw Shredder"'s claws are less crustacean-like in appearance. Claw Shredder was last seen coming out of a pile of rubble. Shiva and Mini Shredder were last seen on top of an elevator as it was falling. None of their fates are known.

The trio's origins in this series are more obscure; Donatello and Michelangelo refer to them as clones, this however could not be true, as the Shredder is later revealed to be the Utrom Ch'rell (the episode synopsis on ninjaturtles.com confirms they are not clones), though the action figures and 4Kids blog refer to them as clones.

In the 2012 series, the Shredder Mutants are introduced in Return to New York and are now certainly mutants created by Baxter Stockman from Shredder's DNA. The Shredder Mutants encounter the Turtles, April O'Neil and Casey Jones as they try to break into Shredder's lair in order to rescue the now feral Splinter. As the Turtles begin to lose the fight against Shredder and his minions, Splinter manages to regain his lost mind and beats back the Mutants and defeats them by knocking them into a large fan. The Shredder Mutants returned in Attack of the Mega Shredder, however, after being tricked by the captured Leonardo and Michelangelo, Bebop and Rocksteady idiotically capture the three mutants and throw them all into the same vat of mutagen in an attempt to create a giant super-mutant (which they succeeded in, creating the titular Mega Shredder). 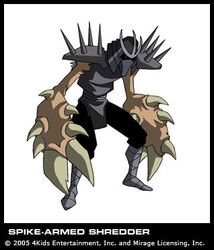 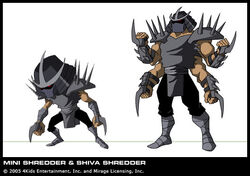