Uses a cybernetic sound suit that is embedded with four generators:

The generators were made of copper, iron and acoustium, an alloy that amplified sound vibrations.
Can adjust his sonic attacks at any direction from his chest generator.
Has a muting device that produced absolute silence by replaying the sound it captured out of sync, making the waves cancel each other out from his right generator.
His helmet can alter his frequency perception by unblocking the sound waves canceled by the sound masker, and thus turning on and amplifying any desired sound.
He has two circular palms that emanate destructive sound wave force, and has razor sharp claws in the event of hand-to-hand combat.
After becoming deaf, Shriek adapted the suit to temporarily restore his hearing while wearing it.

Criminal
Shriek is an antagonist in the DC Animated Universe, appearing in the Batman Beyond episodes "Shriek", "Babel", and "Where's Terry?" and in the Justice League Unlimited episode "Epilogue". Walter Shreeve was an intelligent sound engineer who created a sound suit that could generate and control sound. He would later use the suit and became the criminal Shriek.

Shriek was voiced by Chris Mulkey, who also played Ward in First Blood.

Walter Shreeve was a very talented sound engineer and owned his own business called Shreeve Sound Laboratories. However, he spent all his money on his research, and subsequently drove his company into bankruptcy. Despite this tragedy, Derek Powers saw potential in Shreeve's work and acquired his business and funded his experiments.

Shreeve would create a sound suit with four sound generators placed in the suit, each of which capable of different effects. He intended this technology to be used in demolition work. However, Powers had other ideas. Shreeve was ordered by Powers to use the suit to kill Bruce Wayne.

Shreeve followed Bruce to Gotham City's historical district, where he attempted to kill him with focalized sound vibrations. Thanks to Batman, Shreeve failed in directly killing Bruce, but he hurt him enough to be committed in a hospital.

Before escaping, Shreeve left behind his right hand sound generator, which was vital for Batman to track him down. Later that night, Terry posed as a pizza delivery boy who got his address wrong in order to get into Shreeve's lab. Shreeve didn't resist to an offer of a free pizza, and let the pizza boy inside his lab.

Shreeve allowed Terry to look around his gizmos, and even explained to him how sound masking worked. He then asked him to leave so that he could get back to work, but as soon as Terry asked him about sound vibrations, Shreeve realized he was being duped, so he tackled the impostor. He put on his sound suit and wrecked most of his lab in an attempt to kill Terry. He followed him outside, where he was intercepted by the GCPD. Shreeve repelled the police blimps, and escaped.

Now a wanted fugitive, Shreeve sought retribution against Powers, whom he blamed for his current predicament. Powers appealed to Shreeve's vanity, arguing that he should be contented with the absolute power bestowed by his suit. He even gave him a new name, which would fit his new persona and impart fear in others. As of that moment, Shreeve adopted the moniker "Shriek".

Now referring to himself as Shriek, he implanted a two-way radio in Bruce Wayne's bandage, which tries to influence him to commit suicide (despite Bruce being in a secured hospital). However that failed, with Bruce being transferred to a psychiatric ward. Shriek then decides to try and drive Bruce insane enough to kill himself by suggesting that his food was poisoned. However, Terry (as Batman), finds the hidden transmitter and traces the signal back to the Zanti factory near the hospital.

Shriek then attacks Batman, using his sound abilities from his suit. He blasts him with vibrations, suppresses the sound of the contiguous area, and turns up his suit's volume to hear Batman's footsteps. Despite Shrieks powerful abilities, Batman destroys his sound masker with a batarang, canceling its muting effect. Consequently, Shriek was overwhelmed by the surrounding sound amplified by his helmet, leaving him permanently deaf. Shreeve was arrested but refused to testify against Powers.

Shriek was sent to a mental hospital and was released months later, after being declared cured (it is unknown how Shriek deceived, bribed, or obliged the doctors). After his fight with Batman, all Shriek could hear was an everlasting buzzing sound, which he could only damp with a special headphone that enabled him to hear again. Shriek blamed Batman for his deafness, and became obsessed with killing him. He moved in to a fork shaped tower at Hill Square and recruited Ollie to assist him. With his help, Shriek used the tower as a tuning fork to unleash turmoil in Gotham City.

Shriek's first begins his plan by emitting high pitch frequencies that drove animals crazy and violent. Then, he ran interference with the air molecules, thus disrupting human speech and spreading confusion all over Gotham. After wreaking havoc in the city, Shriek shut off the jamming signal momentarily and contacted Police Commissioner Barbara Gordon to deliver an ultimatum ― Batman was to give himself up quietly, or he'd escalate his attack on Gotham.

When Batman showed up at the rendezvous point, Shriek fights him, but Batman defends himself. Shriek turned up the sound vibrations of the tower, in an attempt to stun Batman, and took off his special hearing aid, so as to be immune to the deafening sound. Batman managed to elude him and tried to shut down the sound device from inside, but he inadvertently activated low frequency vibrations that tore the building down. Unaware of the collapsing tower, Shriek pursued the battle against Batman, who tried to alert him. However, the warning fell on deaf ears, literally, and Shriek was seemingly buried in the rubble.

Despite this, Shriek survived and hid in an underground shelter for the next few months. There he planned to once again try to get his revenge on Batman. One night, while returning to the hideout, Ollie was spotted and followed by Terry. Hearing his associate shouting a warning, Shriek estimates their location and hurled a sonic blast at Batman. Due to the quality of the tunnels, Shriek miscalculated his target's position and failed to kill him. Instead he caused a small cave-in that left Batman knocked unconscious for a couple of hours.

Shriek activated a giant scope that picked up a heart pulse in the proximity. Suspecting it was Batman's, Shriek emitted another low frequency discharge to finish the job. Once again, he misses the target, but this time he causes the tunnel to collapse, trapping Batman. Shriek decides to play it safe, and took off to make sure he had succeeded this time.

In the nearby tunnels, he stumbled upon Dak, a runaway child. Shriek takes the boy back to his shelter, and sent out a message to draw Batman out, unaware that he was imprisoned. When Dak let it slip that he knew of Batman's whereabouts, Shriek threatens to kill him, unless he show him the way. Fearing for his life, Dak obliged. However, Shriek was tricked into breaking through a wall that obstructed Gotham's River, and he was swept away by the flood.

Shriek quickly regroups and attempts to kill Batman. However, he didn't seize the opportunity quickly enough. Instead, he gloated, allowing Bruce the chance to bludgeon him with his cane. Shriek was swiftly knocked out and subsequently handed over to the authorities.

Shriek is seen years later with other enemies of Batman and was a member of the supervillain group, the Inquity Collective, to battle the superhero group, Justice League Unlimited.

Walter Shreeve (without his suit) 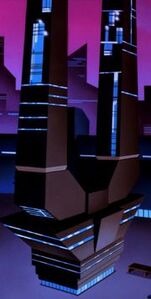 Shriek seen in a flashback in Justice League: Unlimited 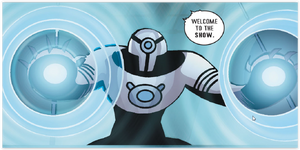 Shriek's appearance in the Batman Beyond comics 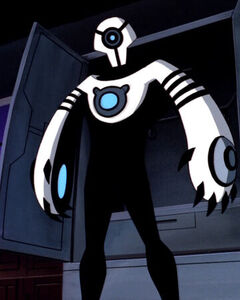 "Look at this sound suit" 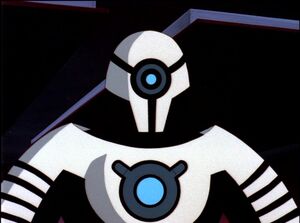 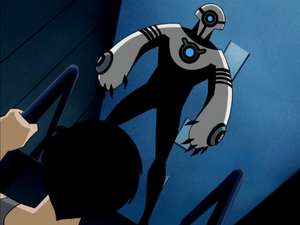 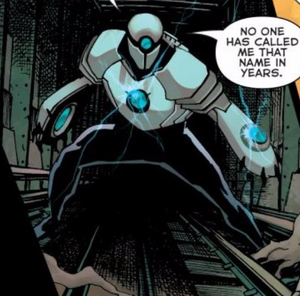 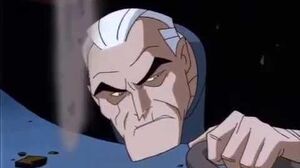 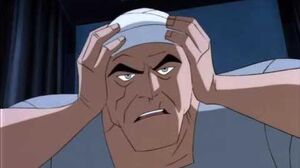 Batman Beyond voices in Bruce's head 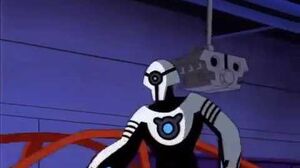 Batman Beyond vs Shriek 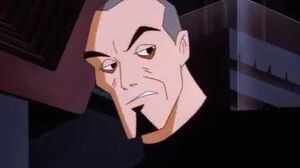 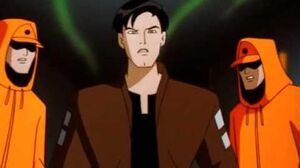 Batman Beyond goes after shriek 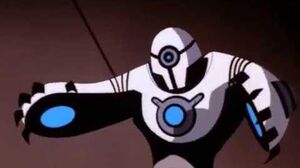 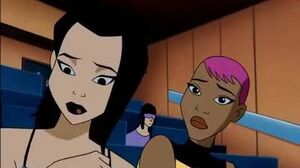 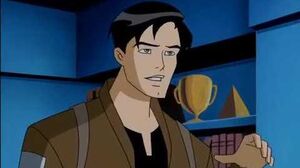 Batman Beyond Bruce saves Terry
Add a photo to this gallery

Retrieved from "https://villains.fandom.com/wiki/Shriek_(DC)?oldid=4143374"
Community content is available under CC-BY-SA unless otherwise noted.